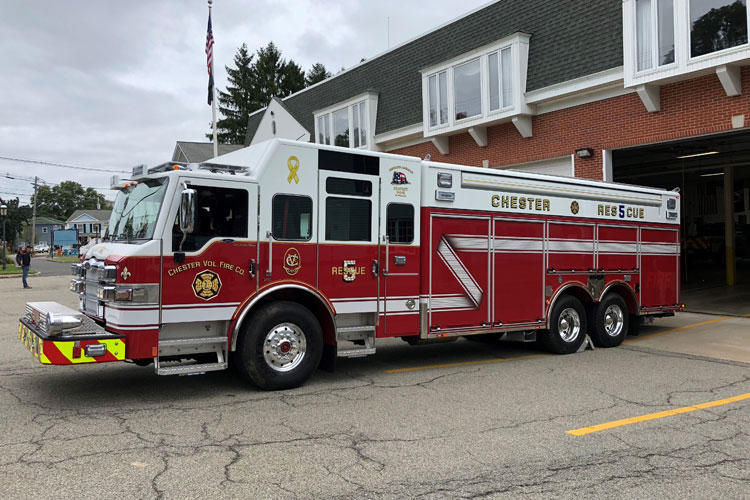 This month’s Compartment Corner comes from the scenic and historic town of Chester, located in Morris County, New Jersey, and like many places originally home to Indian Tribes and then inhabited by early settlers seeking the American dream. During the early years, the area was rich in apple and peach farms as well as agricultural land. Iron ore was also abundant in the area and mines began to flourish until a larger area was found in the midwest. When the mines began to close, the area turned to more farmland with sheep, dairy, and vegetables farms. Since the apples and peaches were abundant, many distilleries also began to develop, helping the local economy. Today the town is still a scenic area, with many farms still operating and is considered a contemporary suburban town with country homes and small town charm because of its historic downtown area.

The Chester (NJ) Volunteer Fire Company 1 was organized in 1921 when some local residents banded together to form the company. They mounted a chemical tank onto one of the original member’s Pierce Arrow truck chassis. Today, the department is very proud of still owning and operating two beautiful antique pieces of apparatus. The first, known as “The B,” is a restored 1963 enclosed cab Mack B Model pumper. The second historic piece, known as “The Turtle,” is a 1959 Dodge Ram Power Wagon, which was the department’s first brush and utility truck. The department currently operates the following apparatus: Engine 1, s 1994 Pierce Lance; Engine 2, a 2004 E-ONE Typhoon; Engine 4, a 1997 E-ONE; Ladder 9, a 1999 Pierce 105-foot aerial; Utility 2, a 1997 Ford 350 brush/utility truck; and a 2008 Ford Expedition chief’s vehicle. The department’s Tender 7, a 4,500-gallon tanker, is currently being rebuilt and mounted on a Peterbuilt chassis and has body work by Pierce. 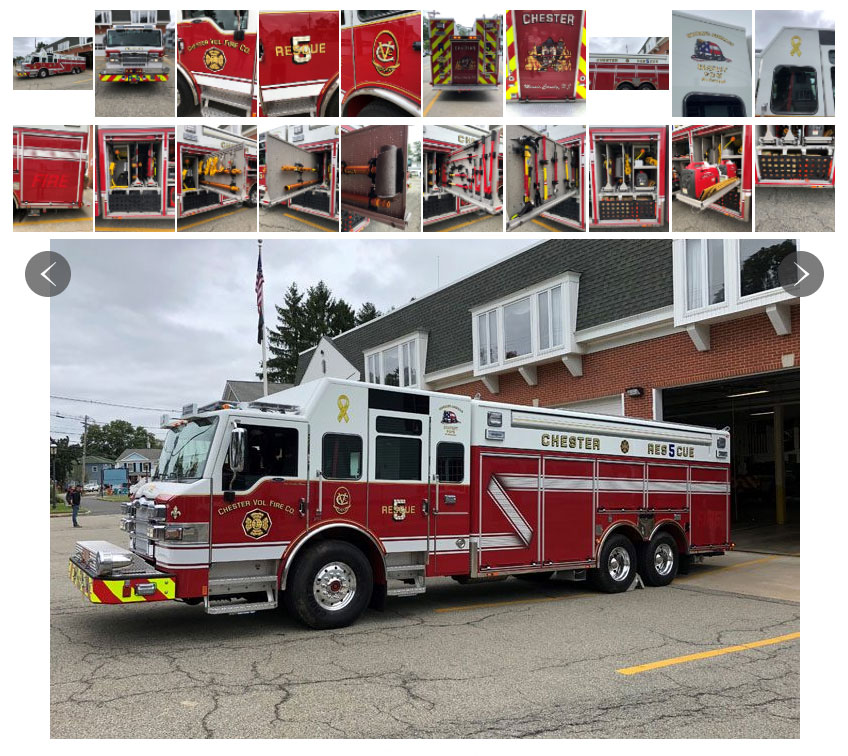 The department also operates Rescue 5, which is a 2016 Pierce Impel 84-inch chassis with a 20-inch raised-roof tilt cab with a 24-foot nonwalk-in rescue body. It is powered by a Cummins ISL9 450-hp engine with an Allison EV400P automatic transmission. The rig has no pump or water tank. It has an Onan 35-kW single-phase PTO-driven generator and Will-Burt Nightscan Power-Lite. The rig has tandem axles with a crew cab that sits eight firefighters. The emergency light package has Federal LED Legend light bars and an LED traffic advisor bar light in the rear. There are three receivers for the portable winch, one of each side and one on the rear of the vehicle. The roof section of the body has coffin compartments on it that store 4,000-psi air bottles for the cascade, Haskell air pump, water and ice rescue gear, and the speedi-dry storage hopper. A unique feature of this hopper is that there is a suction hose in the right rear compartment that allows members to fill the storage hopper instead of climbing and hoisting bags of speedi-dry up to the top of the rig. On the upper portion, the vehicle also has rope rescue eyes mounted on it for high angle rescue scenarios.

Rescue 5 is painted white over red on the cab and rescue body. The entire rescue body has roll-up compartment doors. A white reflective stripe runs along the bottom of the cab and then runs diagonally upward on the first compartment and then horizontally across the rest of the compartment towards the rear of the truck. The rescue body also has side recessed awnings on both sides of the apparatus. The front bumper and rear of the rescue body both have safety chevron reflective striping. The apparatus has some unique gold leaf features; the department’s Maltese cross is outlined in an octagon design on the front cab door. And, the department has placed a new logo, which has instilled more espirit de corp into the organization over the cab’s wheel wells. On the crew cab doors, Rescue 5 signage is affixed and on the rear compartments the word FIRE is embedded on the roll-down slats. The rig also boasts memorial emblems on both sides of the cab in honoring the fallen brothers of September 11, 2001, and yellow “Support Our Troops” ribbons. On the rear end compartment is the unit’s logo of the Tasmanian Devil carrying a halligan bar in one hand and a hydraulic spreader in the other. What is unique is the scared fire character in the flame pattern, just below the animal’s foot which is going to be stomped out.

The first compartment back from the crew cab has two vertical storage racks which pull out from either side of the rig. The compartment also has storage on each side under these racks for cribbing; the department stores plastic cribbing on the chauffeur side and wood cribbing on the officer’s side. On the chauffeur side of the rig, the front of the compartment toward the crew cab has the controls for the light tower, electrical panel boxes, and electrical cord reel and junction box stored in it. There is also a canvas tool bag located here with a variety of small hand tools for easy access; the rig also has a regular four-drawer mechanics toolbox in the left rear compartment on this side of the apparatus. On the front side of the forward pull-out there are two Paratech struts, multiple hooks storing electric cords, pickets, chocks, and elevator keys. On the rear side of this pull-out, there are also two Paratech struts attached and a unique homegrown innovation. A member of the department made a bracket and rod assembly which holds a PIG absorbent roll on it; this make it very easy to pull some padding off to soak up motor vehicle fluids at the scene of an accident. On the front side of the rear vertical slide-out, there are: three different size bolt cutters, two sledgehammers, two pry bars, four crowbars, one windshield saw, and one closet hook. On the rear side of this slide-out, there are: four sets of irons and three D-handled hooks; two sets of irons either married to a sledgehammer or with a halligan and flat head ax mounted next to each other. On the officer’s side of this compartment toward the front cab are two horizontal shelves; one is stationary, one pulls out. On the stationary shelf, there are some extension brackets for hanging fans on them and the power junction box with the electrical cord reel mounted above this shelf. On the lower pull-out shelf, there are two Honda portable generators with LED lights and a few pieces of large-diameter hose scraps used to put over vehicle posts during extrications.

Recently, Rescue 5 won best overall rescue apparatus at a parade and, by looking at the cleanliness of the rig and the compartment layouts, it’s clearly apparent of their pride in their department and apparatus.