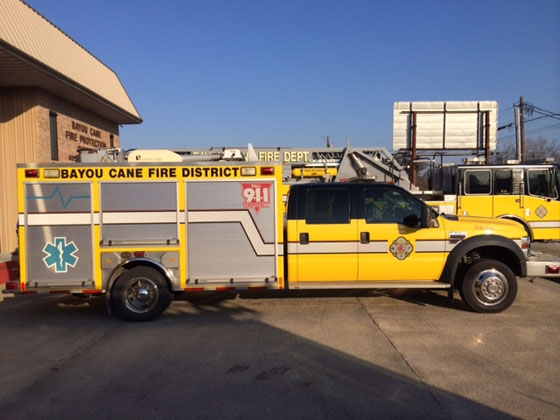 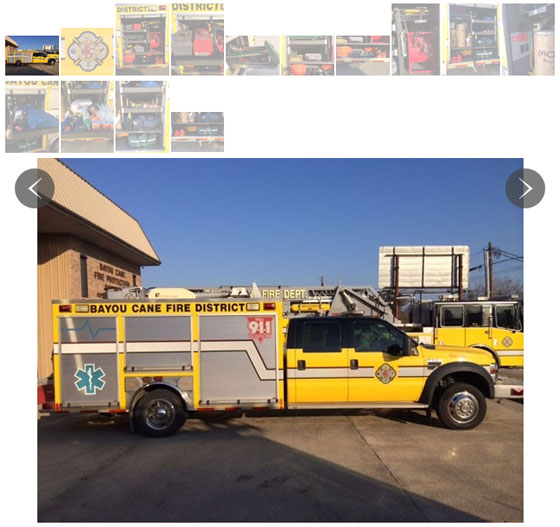 CLICK ABOVE FOR A COMPARTMENT GALLERY OF THIS RIG >>

Bayou Cane is a principal city of the Houma–Bayou Cane–Thibodaux Metropolitan Area in the Acadiana region of southern Louisiana, which includes all of Terrebonne and Lafourche Parishes (counties). It is located approximately 50 miles southwest of New Orleans. Bayou Cane is the commercial hub of Terrebonne and Lafourche Parish, with numerous large retail stores and many smaller commercial strip malls and businesses. The Bayou Cane Fire Protection District provides fire suppression duties, rescue services, EMS duties, fire investigations, safety inspections, and fire prevention activities. It also has a training division that is responsible for the training of new recruits and firefighters at its own fire training classroom, grounds, and tower located behind the main station. The department operates out of four firehouses and its apparatus include engines, towers, squad and rescue trucks, and an incident command post.

The Squad is a four door Ford F550 with a body built by Five Alarm, a local apparatus manufacturer, and is used by the department as the primary extrication unit. The unit’s cab is painted black over a vibrant chrome yellow paint and has a wide white reflective stripe with a black and small red pinstripe on each side of it. (Photo 1) The department’s patch is attached to both of the front doors of the rig. (Photo 2) The body of the squad is also painted yellow but the roll-up compartment doors aren’t. The reflective stripes run along the body. There are also two large decals on the rig’s roll-up doors, on the front compartment is a “Call 911-Emergency” and on the rear door a “Star of Life” with an “electro cardio-gram” line. At the base of the body, the DOT reflective red and white stripping decal runs along the lower edge of the squad for better overall visibility.

The first compartment behind the four-door cab is a large transverse compartment that carries an assorted cache of tools. (Photo 3) Starting on the passenger side of the apparatus, this front compartment has two roll-out trays, two fixed shelves for tools, and three shelves for backboards. Starting at the left hand side of the compartment on the top roll-out tray is: an air-chisel and air-snips tool box, an automotive tool box, two K-Tools, and two triangular reflectors. (Photo 4) At the top right hand side of this tray is the cord for the 120-volt electrical cord; the reel sits behind the tray. On the next lower roll-out tray is an assortment of hand tools that include: three bolt cutters, a pick-head and flat-head axe, three shovels (flat-head, round shovel and collapsible military shovel), halligan, maul, mallet, two pipe wrenches, hydrant wrench, broom, and an extension bracket for the fan. (Photo 5) On the first fixed shelf below the roll-outs is a porta-power tool kit and auto extrication “L” channel bracket. (Photo 6) Sitting in the bottom of the compartment are two metal Shark fast-deployment cribbing devices, two rechargeable flashlights and seven expandable traffic cones. (Photo 7) The right side of this compartment has a large Super-Vac fan in it and a folding step stool (that assists in extrications) that sits in a vertical slot next to it. Above the fan are three long boards and a short board for injured people. (Photo 8)

Looking at this transverse compartment from the driver’s side you’ll notice that the trays and shelves are positioned exactly as the other side but stocked with different equipment. (Photo 9) Starting on the front wall of the compartment are the circuit breakers for the auxiliary electrical power. The unit has a hydraulic generator mounted in the center of this compartment. Next to the electrical panel sits the controls for the telescoping light tower which sits on the top of the body. (Photo 10) The backboard shelves transverse the entire compartment, allowing them to be deployed from either side. A large drum of absorbent and four metal tie-back stakes are also in this section. On the first roll-out upper tray is: a pressurized water extinguisher, two KED collapsible short boards, three sets of ear protection, one hare traction splint, and three electrical pig tails. (Photo 11) The lower roll-out tray is equipped with much of the unit’s extra EMS equipment, ranging from straps, pads, splints, neck braces, spare 02 and even plastic fire helmets used to calm children down at emergencies. There also is some extra Duct tape and yellow “Caution” tape stored here. (Photo 12) Just below the roll-out trays, sitting on the next shelf, is the unit’s two trauma bags and defibrillator. (Photo 13) On the bottom shelf sits the 02 bag, two flashlights and two collapsible folding chairs used for either rehab or for victims at emergency scenes. (Photo 14)

The Bayou Cane (LA) Fire Protection District has a multitude of beautiful apparatus and compartment layouts. One can truly see by the shape of their units, the equipment stored on them and their daily apparatus checks that pride, tradition, and honor run deep in this department.

MIKE CIAMPO is a 29-year veteran of the fire service and a lieutenant in the Fire Department of New York. Previously, he served with the District of Columbia Fire Department. He has a B.A. in fire science from John Jay College of Criminal Justice in New York City. He is the lead instructor for the FDIC Truck Essentials H.O.T. program. He wrote the Ladder chapter and co-authored the Ventilation chapter for Fire Engineering’s Handbook for Firefighter I and II (Fire Engineering, 2009) and is featured in “Training Minutes” truck company videos on www.FireEngineering.com. He also wrote the Ground Ladders-Bread & Butter DVD (Pennwell) and writes the monthly column ON FIRE on the back page of Fire Engineering.