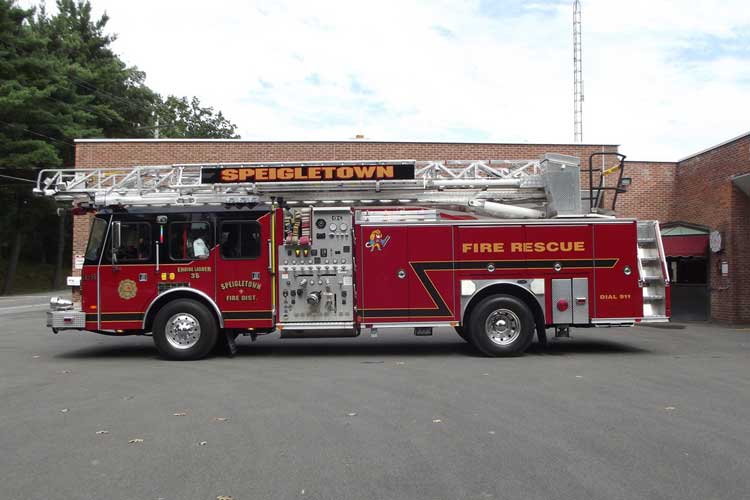 Speigletown is a hamlet within the town of Schaghticoke, Rensselaer County, New York. It is located just northeast of the City of Troy. It is near the Hudson River and also a suburb of the City of Albany, the capital of New York. As with many areas in the northeast, the land was once inhabited by the Mohican Indian tribe, and early settlers went to this area because of the river’s transportation traits. Agriculture flourished early on, and with the mills operating on water power from the river, things flourished for the area. Today, the agriculture presence is still there, but much of the area is now residential and commercial like so many areas in the vicinity of larger cities.

The Speigletown District (NY) Volunteer Fire Company (SDVFD) began back in the summer of 1944 when a group of men decided the area needed fire protection. At this meeting, it was decided to begin fundraising efforts to purchase equipment. While those efforts were under way, the department responded to its first fire in 1945. The members responded without any apparatus or equipment to a barn fire. W the blaze was roaring, members entered the adjoining house to remove furniture and personal belongings of the owners before they were lost to the ravages of fire. Soon after the fire, funds were secured, and the department purchased its first pumper while its membership had reached a total of 111. The firehouse was being built in the years to follow, and the rig was kept in a local barn until they moved into today’s present firehouse that has been updated and renovated over the years to accommodate the department’s present fleet of apparatus. 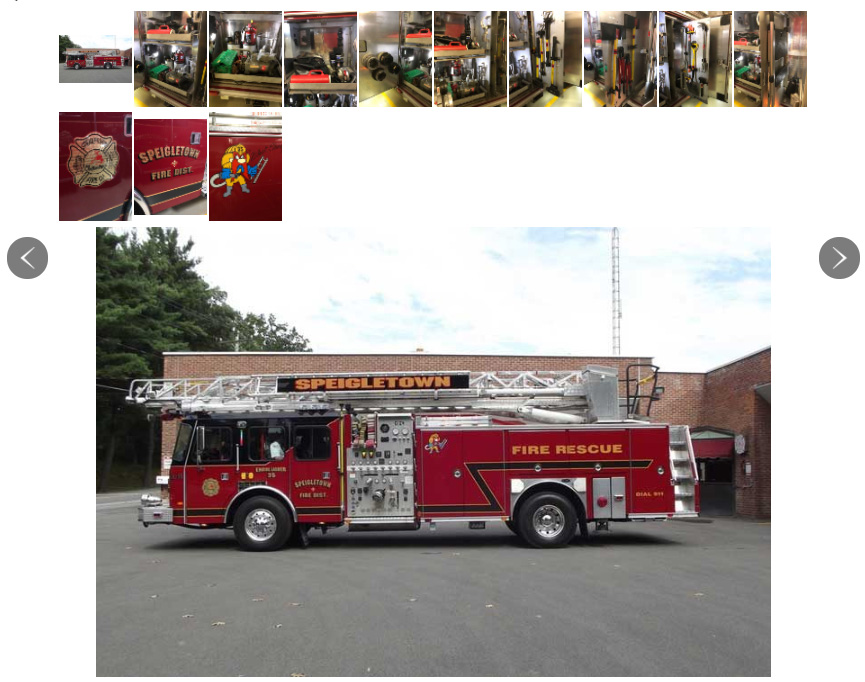 The SDVFD provides basic life support and first responder EMS to the community along with fire protection and fire prevention duties. The department operates a 2013 Ford Explorer Police Interceptor as Car 1, a 2005 Ford Explorer as Car 2, a 2006 Ford Expedition as First Responder 35, a 2001 Ford 550 mini pumper, a 2016 KME engine-rescue, a 2016 KME engine-tanker. The department also boasts a 1936 American La France with a Diamond Rio straight six engine that is used in parades, musters, public relations events, and members’ funerals.

Engine-Ladder 35 (EL-35) is a 2006 E-One Typhoon 75-rear-mount rearmount HP 75 aerial ladder. It has a 1,500-gpm pump, a 500-gallon water tank, and a 25-gallon Class A foam tank. The apparatus is painted black over red on its cab and red on sides of the rear body. There are three reflective stripes (two thin yellow and one thick black) running along the lower portion of the cab and continuing along the body until it goes into the “Z” pattern and runs higher on the rear portion of the rig. The words “Fire Rescue” are on the side compartments over the wheel well. The aerial ladder has large signage on each side with “Speigletown” written on them. The Tasmanian Devil is on all of the department’s apparatus, with equipment or tools that resemble that company’s specific duties. On EL-35 the devil is holding a ladder in one hand and a nozzle in the other, with the words “Black Sheep” above it.

The driver’s compartment behind the pump panel is equipped for engine and truck work. The compartment has two large horizontal pull-out trays on the left side of the compartment. The right side of the compartment has two large vertical pull-out tool storage racks. On the lower shelf, there is a dry chemical extinguisher, hydrant valve, assorted fittings box, assorted hand tools (rubber mallet, hydrant, and spanner wrenches), K-Tool, and fire line tape. On the lower portion of the wall next to this tray are two spanner wrenches stored on the right-hand side and a radio mounted on the left side of the compartment. On the upper tray are assorted nozzles, assorted fittings, spanner wrenches, a hose roller for draining, and acontainer for flares. The right side of the wall has two larger spanner wrenches mounted, while the left side is the electrical breaker box for the accessories. On the compartment door’s interior panel are four sets of adaptors mounted on it, which provides easy access for the driver to retrieve them. On the first vertical pull-out tray toward the front of the rig is an assortment of smaller hand tools, including two TNT tools and two “D” handle closet hooks or pike poles. The rear side of this pull-out has a flat-head and pick head ax and two sets of bolt cutters mounted on it. On the next pull-out tray, the front side has a host of tools secured in mounting brackets. There are two halligan bars, an “A” tool, a Pry-Axe, a flat shovel, a mini sledge, and a small demolition hook. The opposite side of this pull-out tray has a small folding step ladder on it.

EL 35 has performed well with the way the membership has set the apparatus up and how it responds in its fire alarm district. The Speigletown District Volunteer Fire Department has a great deal of pride in its equipment, apparatus, and station and continues to provide protection and assistance to the citizens it serves on a daily basis.

MICHAEL N. CIAMPO is a 33-year veteran of the fire service and a lieutenant in the Fire Department of New York. Previously, he served with the District of Columbia Fire Department. He has a bachelor’s degree in fire science from John Jay College of Criminal Justice in New York City. He is the lead instructor for the FDIC Truck Essentials H.O.T. program. He wrote the Ladders and Ventilation chapters for Fire Engineering’s Handbook for Firefighter I and II (Fire Engineering, 2009) and the Bread and Butter Portable Ladders DVD and is featured in “Training Minutes” truck company videos on www.FireEngineering.com. He also writes the back page column “ON FIRE” in Fire Engineering.

Hangout: What It Takes to Spec Out That New Rig