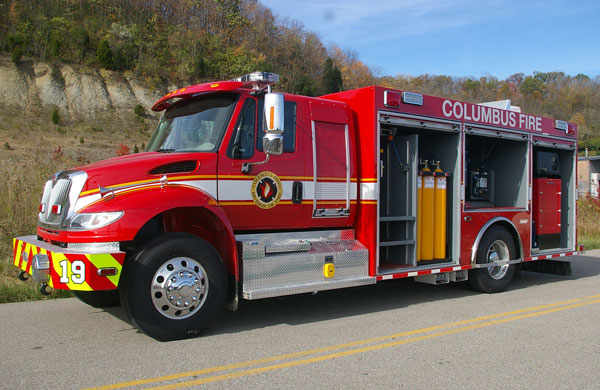 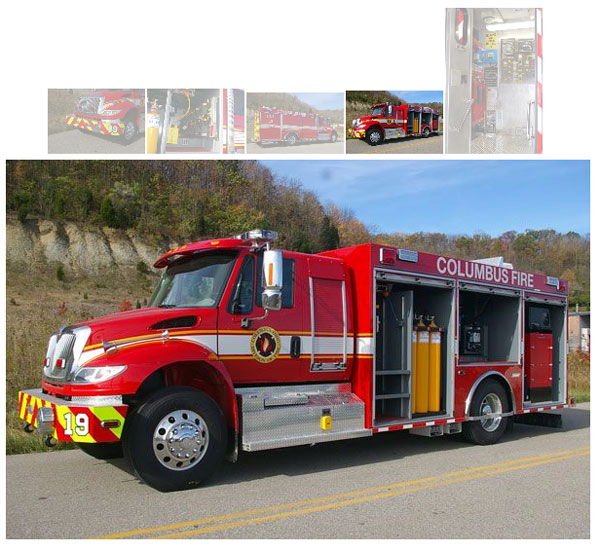 The Columbus (OH) Fire Department developed a set of specs for a new air and light vehicle, which it calls an incident support unit, but after a visit with Summit Fire Apparatus to see how Summit designs such units, it redid its specs to be a combination of some of its original details along with ideas from Summit’s design. The resulting vehicle was delivered in December 2015 and has proven to be not only a larger truck, but one that’s much easier to use and operate.

The new vehicle that Summit built for Columbus incorporates a room at the back of the vehicle that serves as the control room for the breathing air refill operator, says Joe Messmer, Summit’s president. “That’s why a drop frame is required on the truck where the floor is set to around 18 inches off the ground,” Messmer says. “The room is five by eight feet, and the operator can control the compressor and refill bottles from there, plus monitor the truck’s engine through a Class 1 engine monitor.”

The incident support unit is built on an International 4400 two-door chassis with a rear drop frame, powered by an International 330-horsepower (hp) diesel engine with an exhaust brake retarder. The fire truck has a 16-foot equipment body, six compartments covered by ROM roll-up doors, a four-cylinder Scott RevolveAir self-contained breathing apparatus (SCBA) cylinder sequencer, a totally enclosed fragmentation station, a 28-bottle SCBA cylinder storage area accessible from both inside and outside, and a Bauer 35 cubic feet per minute (cfm) at 6,000 pounds per square inch (psi) air compressor.

William Griffith, a Columbus Fire captain, says the department’s original design didn’t have a separate room for filling air bottles. “We had been filling bottles from outside the truck with a defrag type station,” Griffith says. “Once we saw Summit’s fill room in the back, our personnel liked it. It uses a pass-through rack from the outside that secures the bottles and allows the operator inside to get to them to fill the bottles and then the firefighters to get to the refilled bottles from the outside.”

Doug Wortman, Columbus Fire project specialist, adds that the filling room and rack arrangement works well in his department’s climate. “The firefighter puts a bottle needing to be filled neck-in on the rack, and those that have been filled by the operator are neck-out and easily identifiable,” Wortman says. “The air supply on the truck is out of the weather and away from traffic, as the rack is in the last compartment on the officer’s side of the truck.”

Scott Sanders, Columbus apparatus lieutenant, notes that the incident support unit is busy every day. “We use the vehicle to maintain our station cascade systems,” Sanders says. “Every morning the unit makes the rounds to our stations to top off their cascade bottles. The vehicle also gets dispatched to working fires, and at least once a week it gets actively used.”

Griffith adds that the vehicle’s operators are very happy with a mechanical power takeoff (PTO) generator. “We put in a Waterous transfer case with the direct-drive generator,” he says, “and when it engages, it’s smooth and quiet. The original compressor we spec’d was on the limits of what a hydraulic generator could handle, so we put in the transfer case and stepped up the size of the generator so that we could have a reserve. This unit could be a power station if necessary.”

In terms of lighting, the incident support unit carries two electric cord reels, each holding 250 feet of cord, both high-pressure and low-pressure air reels with 300 feet of hose each, all LED lighting in compartments, Whelen 900 LED warning lights, Whelen 810 LED scene lights at the rear, two FRC 1,000-watt recessed quartz lights on the sides, and one FRC rear-mounted quartz light.