Shifting to neutral then third, Kevin Maloney double clutches the gears. The 1951 fire engine responds, giving a slight groan before picking up speed.

A brisk breeze, not even 40˚F, whirls around the open cab of Maloney’s historic truck. Unphased by the cold, the Greeley (CO) Fire Department battalion chief grins. “See that chrome light?” he asks, nodding toward the hood of the pumper truck. “That’s my favorite part. The nose. I love how the chrome reflects back the lines of the truck as I’m driving. I can see its face—the truck’s personality.” He grins again and nods in affirmation. 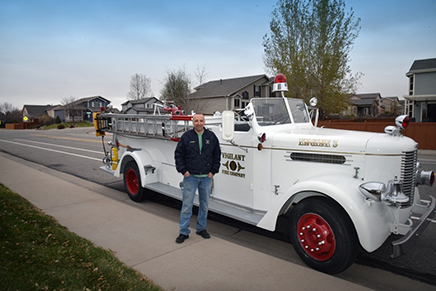 But, Maloney sees more than just the iconic curved lines of the 1951 Peter Pirsch pumper. The white paint stirs up memories of his father, who passed away 26 years ago, and through the windshield, he pictures what Greeley was like before it became a sprawling Colorado city. And, Maloney will never forget the truck’s new “firsts”—a bumper sit with his friend, Alvan, and the engine’s (re)maiden voyage with his wife, Victoria, in an empty parking lot, where she mastered driving the rig. Call it nostalgia, but it’s what drove Maloney to refurbish the neglected fire truck that once served the streets of Greeley; Salida, Colorado; and eventually, Buena Vista, Colorado, where it became a postcard image. Now, the truck has a new story, one that has taken more than two years to (re)make.

THE REMAKING OF THE VIGILANT

More than 2½ years ago, a friend forwarded Maloney the classified ad that would bring the long-lost Greeley truck back home. Originally built in Kenosha, Wisconsin, the truck could pump 750 gallons of water per minute. The Pirsch, the Cadillac of fire apparatus back then, was delivered new to Greeley in 1951 and served much of its time as Engine 1 until it was replaced in 1956.

When Maloney saw the ad, the truck had two things going for it: its ties to Greeley, a department Maloney has served for 26 years, and its almost uncanny resemblance to another fire truck that was captured in a 1950s newspaper photograph showing a white pumper from Pueblo, Colorado, that happened to catch fire. In the faded black-and-white image, two firefighters work to put out the flames, one of them being his father, Jack. “I’ve always been fond of historic fire trucks, especially this era, because it was a time when my dad served as a fireman.”

Jack Maloney was more than just a fire engineer. He was a vehicle magnet, collecting and refinishing antique cars and vintage motorcycles. First, there was a 1951 Aerial Square 4. Then came a hot Jaguar with a sun roof, followed by a 1928 Packard limousine. After that, a 1931 Cadillac, two Indians, a 1928 Essex, a 1941 Plymouth, a 1937 Crocker, and dozens of other vintage finds. Like his father, Kevin Maloney had an appreciation for the classics, but it wasn’t until he set eyes on the Pirsch that his own restoration hankering kicked in. 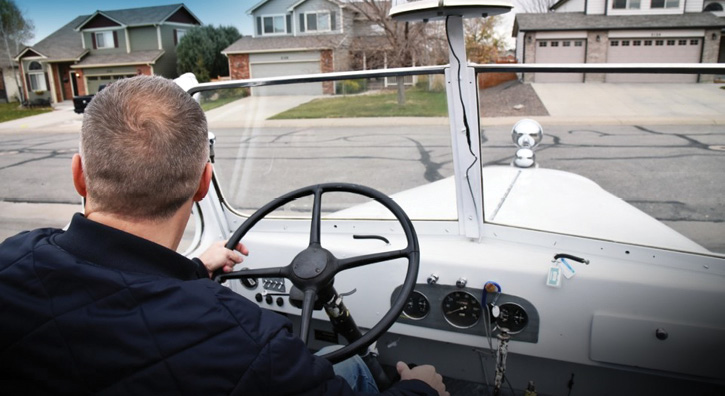 2 Maloney’s favorite view: the reflection of the hood in the light’s chrome.

In fact, the younger Maloney, now 49, had a lot of studying to do. He read up on filler, primer, and paint. He watched endless YouTube videos and spent hours at the paint shop asking questions. With plenty of Miller Lite on hand and country music drifting in the background, he began stripping away buckets of rusted bolts and pounding out fenders with a “cheap-o body hammer” in the confined space of his residential garage; the garage door had to be raised so the truck could fit. A buddy helped him weld and repair a smattering of holes. Finally, Maloney bought a “pretty decent paint gun.” He was ready for paint—white, of course, like his dad’s old pumper and the Pirsch’s original 1951 color. “At some point, they had painted the truck a sickly yellow-green,” Maloney laughs.

The battalion chief moved his pumper to a friend’s pole barn in Nunn, where Maloney literally camped out (in a camper) for a whole month in between shifts at the station, prepping and finally painting the Pirsch. Maloney estimates he has put more than 700 hours into this labor of love. His ever-supporting wife just shakes her head and smiles at the dedication. “I know how much this truck means to him,” she says.

Finally, it was time for the “first” bumper sit with his Nunn friend, Alvan Shipps, a retired Greeley firefighter. “Alvan used a fork lift to raise the 500-pound tailboard while I lay under it, screwing in bolts. Finally, we were able to have that first bumper sit,” Maloney remembers. “After that, we just sat there and talked.” 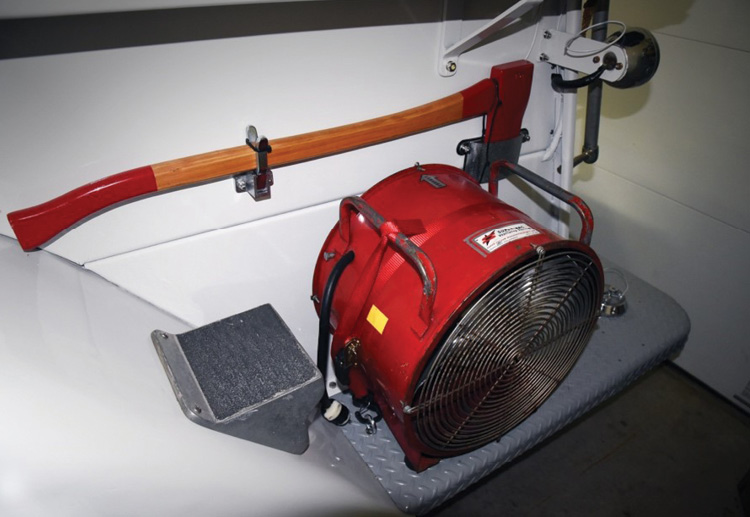 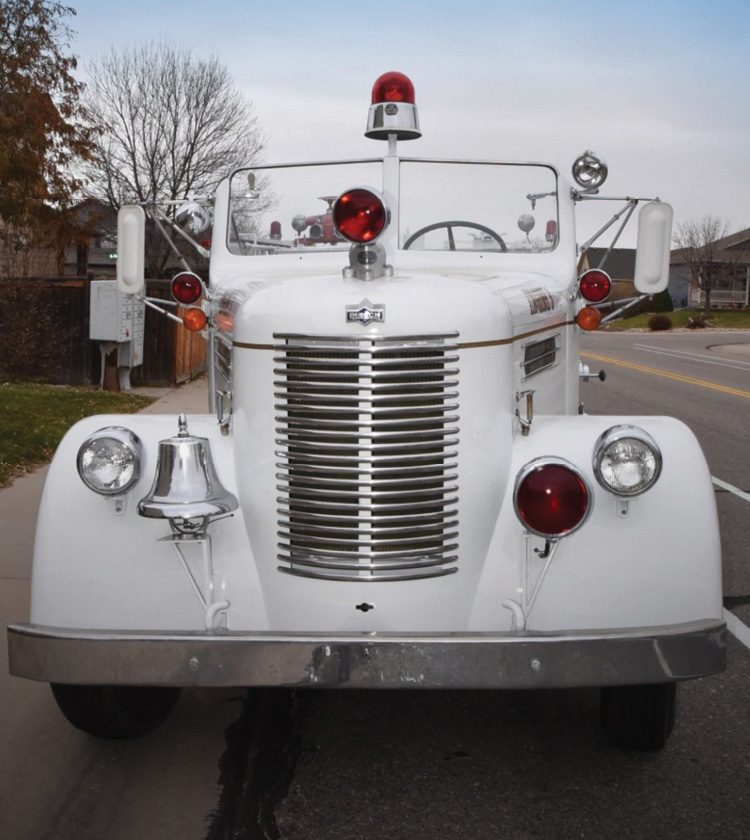 4 The front profile of Maloney’s Pirsch pumper—the personality of the truck. 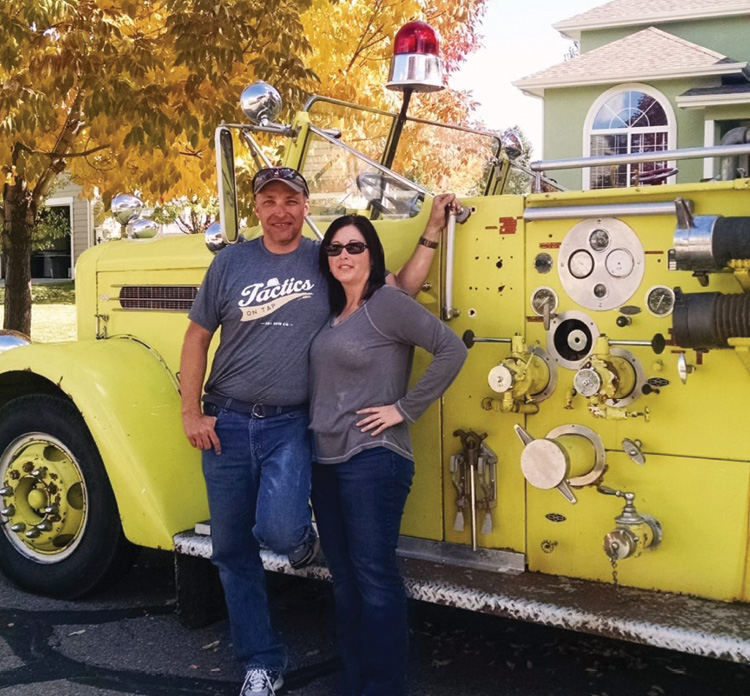 5 Maloney and his wife, Victoria, stand next to his fire truck. (Photo courtesy of Kevin Maloney.) 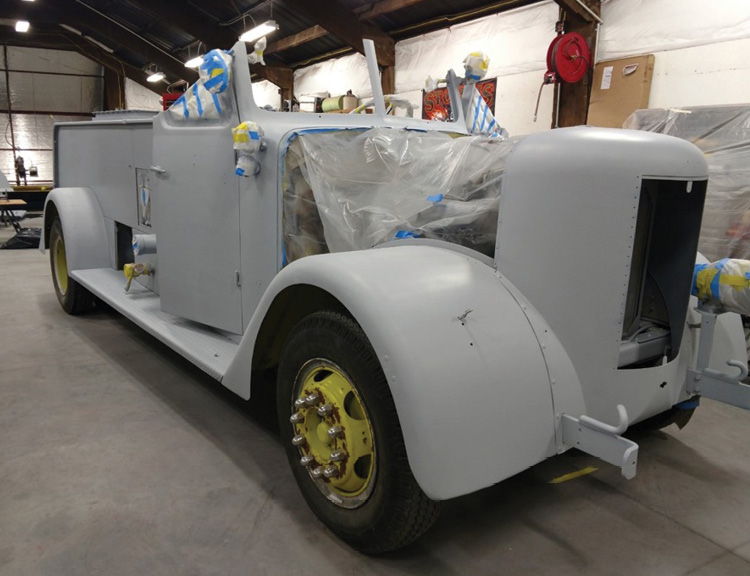 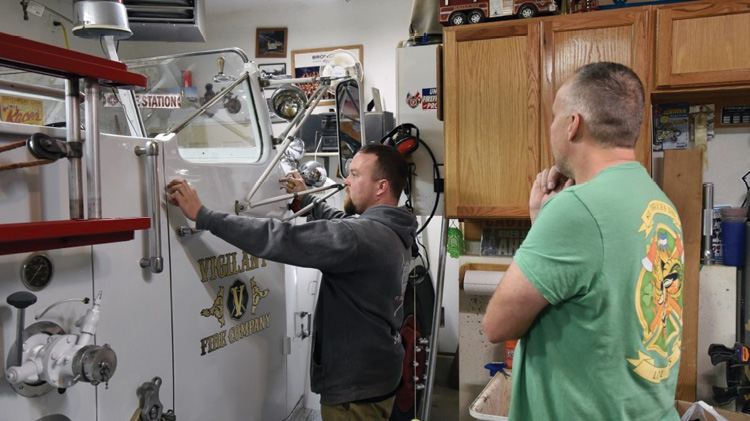 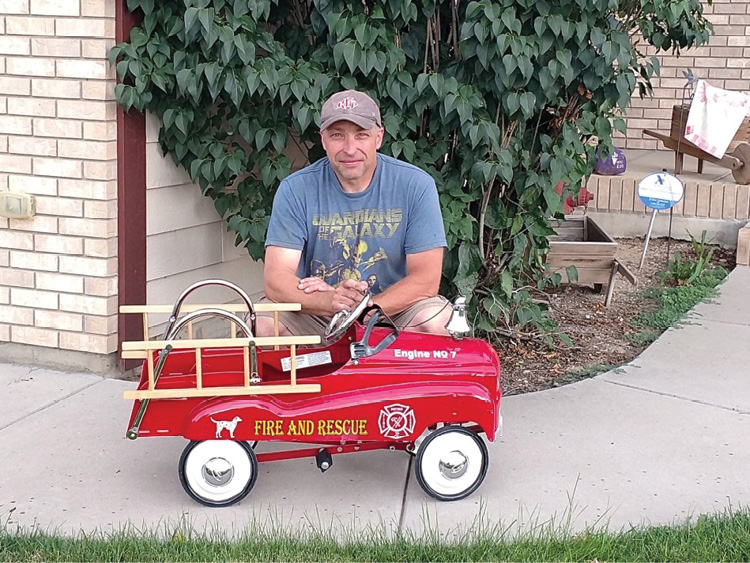 8 Maloney’s next project: transforming this pedal car into a replica of his truck. (Photo courtesy of Kevin Maloney.) 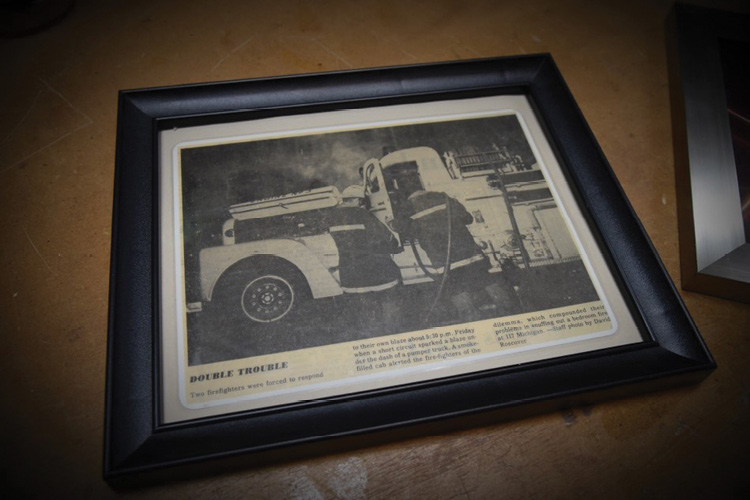 Maloney moved the Pirsch back to his garage for the final bling: $700 worth of stainless-steel nuts and bolts, a 1950s era deck gun, an intricate hose nozzle, a vintage Super Vac fan, and his father’s very own ax—used during his Pueblo (CO) Fire Department tenure. Still on Maloney’s wish list is a hard suction hose from the 1950s.

Maloney even named the truck, calling it the “Vigilant” to pay homage to its original era, a time when truck monikers were seemingly plucked from a thesaurus, like the names “Pride” and “Allegiance.” Enlisting the help of Fort Collins (CO) company SVI Trucks and its vehicle graphics department, Maloney added vehicle striping, door decals, vintage lettering, and intricate swirls, all in 22K gold for a classic look. The hood reads “Engine 3,” once again a nod to his father’s memory. Maloney’s father never got to see him on the job; Jack passed away 45 days before Maloney joined the Greeley Fire Department on December 1, 1994, exactly 31 years after his father became a career firefighter.

“The graphics just helped give this truck more meaning,” he says. “I can’t say enough about SVI Graphics, or SVI Trucks for that matter. SVI Trucks has had a hand in Greeley’s entire frontline fleet, whether newly built or our two refurbs. These graphics help complete a piece of history.” And while the truck is a piece of history, Maloney is making new memories with it every day.

He and his wife take it out for occasional ice cream trips and stops at JB’s Drive In, a vintage Greeley sandwich shop that has been rocking neon lights, vinyl booths, and telephone ordering kiosks since 1937. Call it more nostalgia, but Maloney even likes to drive down 8th Street in his fire truck, imagining his pumper responding to fires on a blustery winter night. A trip to the fire museum archive yielded little history on the truck, but Maloney knows the Pirsch was there one night when a fire grew to major proportions on 8th Avenue and 8th Street. His pumper, photographed in the newspaper article, helped put the fire out.

Now, the Pirsch is destined for a few parades, Maloney says. In fact, it has already been in a few. “I made sure I picked a paint that would hold up to kids. I want them to be able to climb all over this truck,” he says. He’ll even let them tug on the bell, and Maloney is looking to restore a fire truck pedal car this winter, with plans to paint it white like the Pirsch.

In the end, though, Maloney knows all of this restoration work is for one person alone: Kevin Maloney, himself—a fire-truck-loving boy who never lost that passion when he grew up.

AMY SPEER is a decades-old journalism veteran and former Rocky Mountain News editor. Speer has authored numerous award-winning newspaper and magazine articles before joining the fire and emergency industry to work with more than a dozen of the top fire and emergency brands to share their stories.