The Cleveland (MN) Fire and Rescue Department was seeking to buy a new pumper designed like its predecessor but with a roomier cab, more space around the enclosed pump control panel, an onboard foam cell, an electric ladder rack, and an all-around-view camera system.

Cleveland found what it was looking for in a Full Response® pumper from CustomFIRE Apparatus.

John Schabert, Cleveland’s chief, says his apparatus committee performed a lot of research on the various types of pumpers available that fit the department’s needs. “We investigated a lot of options trying to find the best vehicle at the best price,” Schabert says. “We had several manufacturers contact us about their pumpers, but we didn’t like the way they set up their cabs and chassis. We wanted to stay very close to the style of our previous pumper, and when CustomFIRE brought out a demo for us to try, we decided it was just what we wanted.” 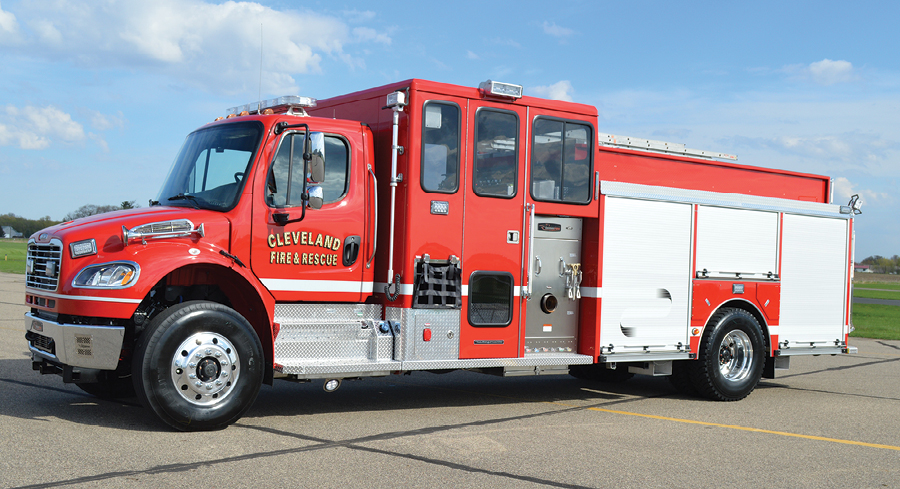 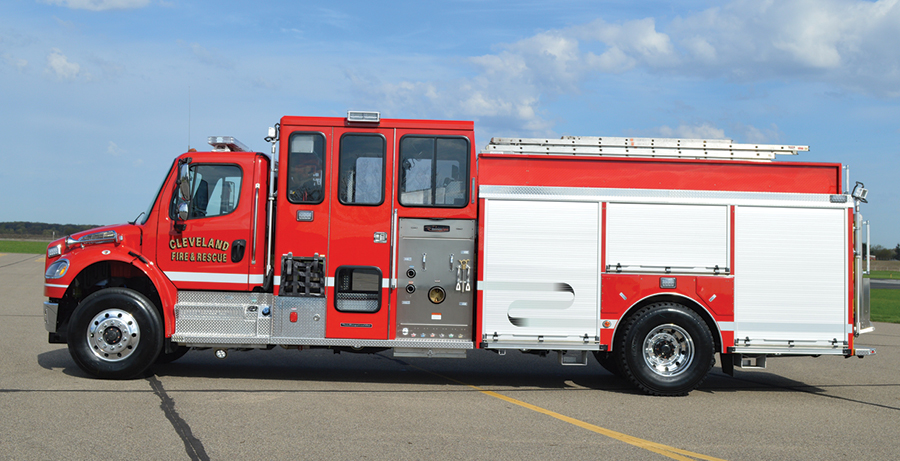 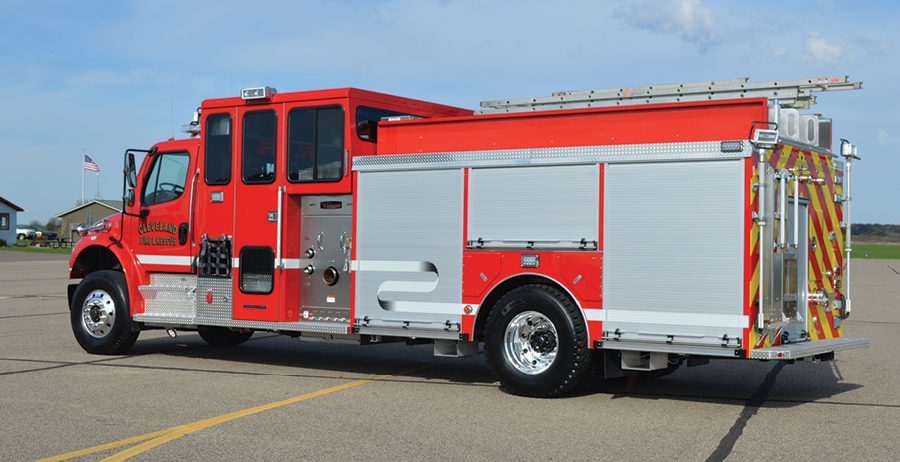 He adds that the department’s response area covers approximately 60 square miles and has a population of about 2,000. “The majority of our district is residential and agricultural use,” Schabert notes. “There is very little commercial or industrial activity—typically grain elevators and restaurants but a lot of lakeside homes.”

The Full Response pumper that CustomFIRE built for Cleveland is on a Freightliner M2 chassis with a 12-gauge stainless steel cab and body with the pump and control panel enclosed in the cab, along with preconnected speedlays and seating for five firefighters. Overall length on the vehicle is 33 feet, overall height is 10 feet 6 inches, and wheelbase is 247 inches.

• Four-inch discharge on officer’s side

• Whelen telescoping LED scene lights on back of cab

Schabert says the pumper also has a command desk and an emergency medical service (EMS) cabinet in the crew cab and winch receivers on the sides, front, and rear of the vehicle. “We’ve put four-point winch receivers on all of our apparatus,” he points out. “With motor vehicle accidents, we can use them to winch a car out of a ditch or other inaccessible place. We’ve also used our winches to pull a car out of a garage that was on fire and to rescue a horse that had fallen through the ice into a pond.”

Schabert notes that the vehicle’s operators are very pleased with the Safety Vision four-eye camera system on the rig. “The camera system is awesome,” he says. “This is our first truck with cameras, and in running an operation, the pump operator can watch all sides of the vehicle and especially the water levels in the portable water tanks. Since we bought this pumper, we’ve added a dual-camera system to our pumper-tanker and rear cameras to our other tanker and our brush rigs.” 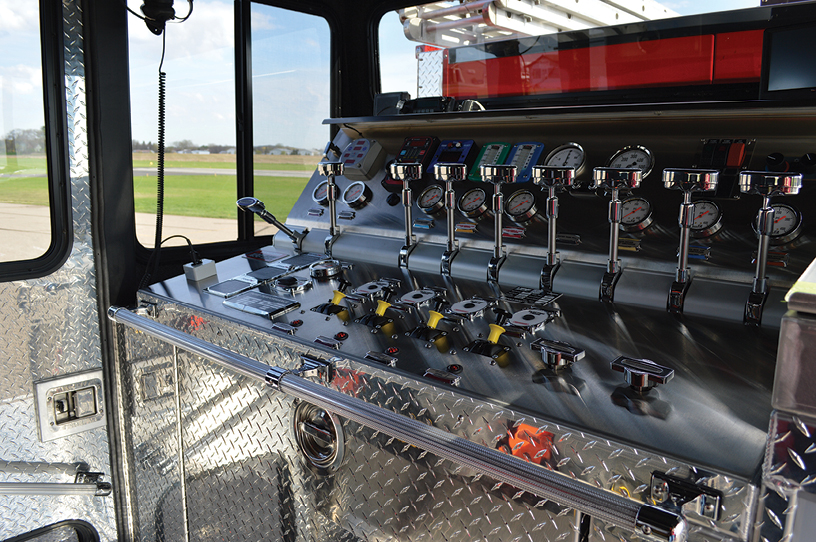 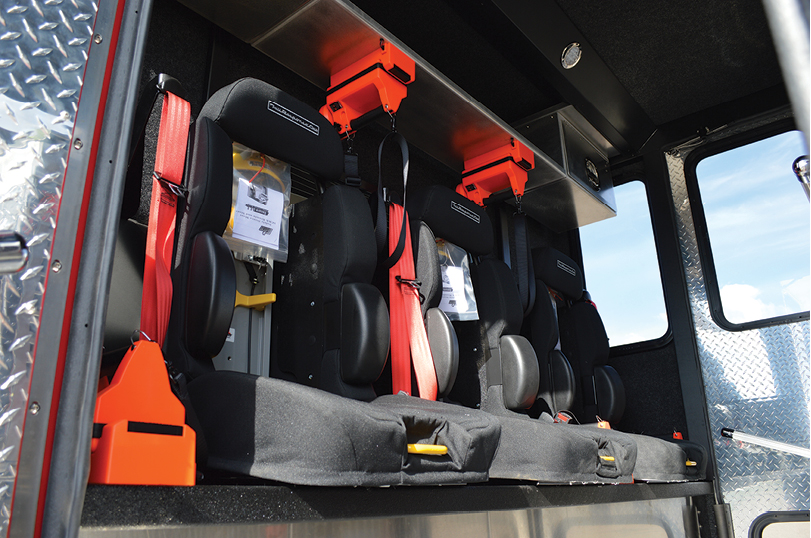 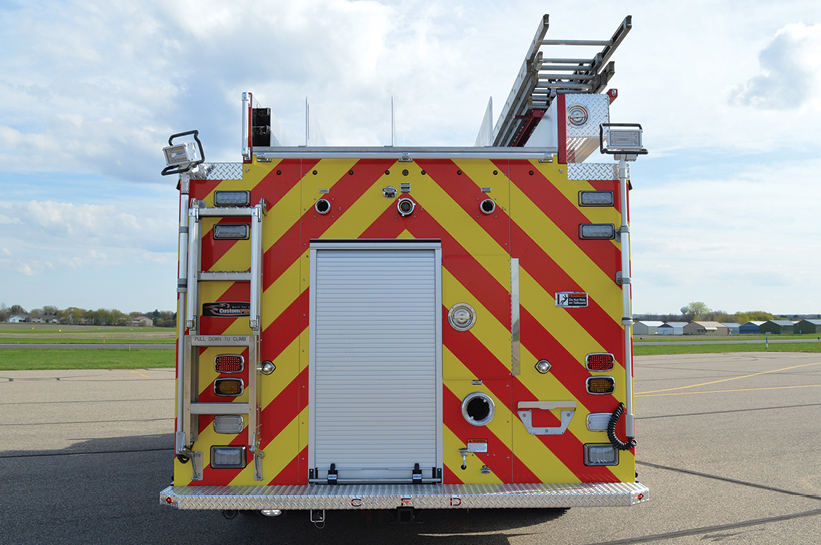 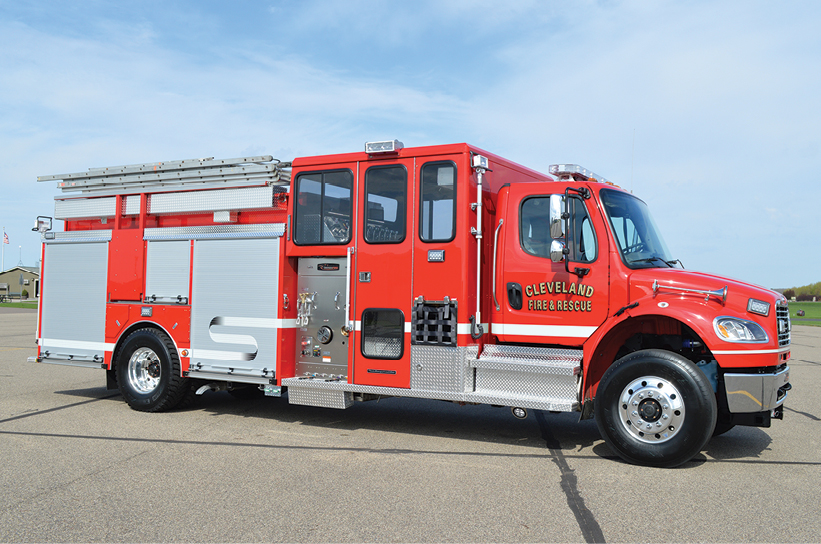 4 The Full Response pumper has a Waterous CSC20 1,250-gpm midship pump, a 1,000-gallon water tank, a 30-gallon foam cell, and a FoamPro 2001 single-agent foam system. 5 Storage cabinets are placed above and below the three rear-facing seats in the enclosed cab. 6 Four winch receivers are located on the sides, front, and rear of the pumper. 7 The CustomFIRE Full Response pumper has a Safety Vision four-eye camera system, a SmartPower 10-kW hydraulic generator, an electric ladder rack, and Ziamatic power steps under the cab.

Kirvida says the Full Response pumper design was his father Jim’s idea. “My dad came up with this idea for that enclosed style cab around 1980 when a lot of open-cab pumpers were being run by fire departments,” he says. “He wanted to build a cab that combined the pump panel and the crew but would still fit on a two-door commercial chassis. Back then, crosslays were not very popular, but our Full Response pumper design morphed into using speedlays in their place.” Kirvida adds that the design has the pump and control panel, heating and air conditioning, space for five crew, and preconnected hoses all enclosed in a safe environment.

In addition to two 2½-inch speedlays in removable trays, the pumper also has four 2½-inch discharges (at the rear, in the hosebed, and one on each side), a four-inch discharge on the officer’s side, and three six-inch suction intakes (left, right, and rear).

On the First Response pumper’s performance, Schabert says, “We have had quite a few fires here in the last year, and the pumper has handled them very well. Our old pumper had to be revved up high, but CustomFIRE’s new pumper just idles along nicely, and it’s so quiet, you hardly know it’s working.”

Firefighter Safety and Comfort Among Emerging Trends Expected at FDIC 2014