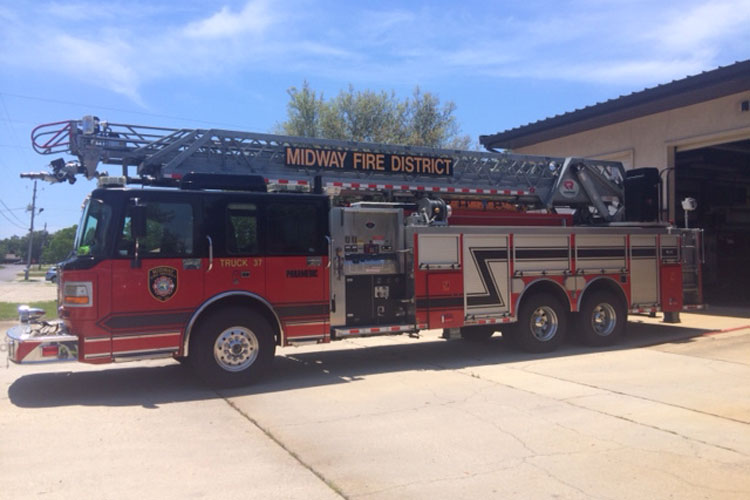 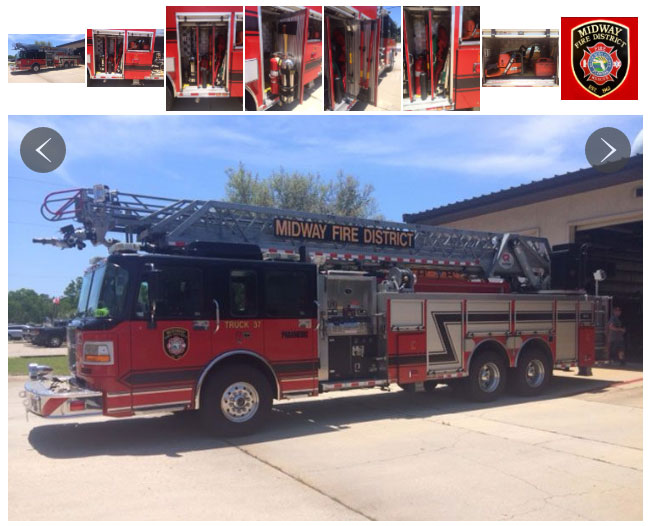 The Midway Fire Protection District is located in the panhandle of western Florida in Santa Rosa County. The county is primarily a bedroom community for Pensacola and Eglin Air Force Bases. It is also widely known for its pristine sandy beaches as it sits on the Gulf Breeze Peninsula (Fairpoint Peninsula), surrounded by Pensacola Bay, East Bay, and Santa Rosa Sound. Life for most of the southern residents of the county involves numerous water activities such as boating, paddle boarding, swimming, surfing, fishing, and relaxing along the shore lines. In the northern section of the county, it is mostly forest and farmland today but did once contain areas with oil and gas fields.

The Midway Fire District was a volunteer organization and incorporated in 1963 with most apparatus parked at either resident’s homes or at sheds of areas businesses. In 1982, the Midway Fire Protection District was formed and in 1998 career firefighters began serving during the daytime periods. In 2001, firefighters began working two shifts of 12 hours and working seven days a week until 2002, when the district went to a 24-hour shift schedule. In 2004, the district became a licensed advance life support first response agency, the first in Santa Rosa County. Additionally, it started a hazmat team, a special operations division, and fire prevention bureau.

The district serves an area of about 26 square miles in the 32563 zip code, running out of two stations: Station 35 (located centrally in the district) and 37 (located on the east end of the district). They also provide mutual aid responses to Gulf Breeze, Navarre, Navarre Beach, Pensacola Beach, and Avalon-Mulat areas. The operations division has 26 members who work 24-hour shifts in a three-shift rotation. These personnel are required to be certified Firefighter II by the State of Florida and either be emergency medical technician (EMT) or paramedic-trained. Many of these personnel are also trained as hazmat technicians, and all firefighters in their first year must complete 80 hours of apparatus operations and fire service hydraulics training. A unique feature of the district is that it owns and operates its own training academy—the Midway Fire Academy—which was established by the Florida State Legislature. Not only does it provide training for its own members, but it has also branched out to include continuing education classes and entry level training for local firefighters. The main training props and buildings are located either adjacent to or behind Station 37. The academy’s engine is also stored in one of the apparatus bays at the station.

Truck 37 is a 2006 Rosenbauer 100-foor aerial ladder, equipped with a tank and pump, that runs fire and EMS runs out of Station 37. It is painted black over red, with the aerial control box on the turntable also painted black. The truck is equipped with roll-up compartment doors on each side of the apparatus that aren’t painted. There is a black reflective stripe running low along the crew cab, and then it goes higher on the body of the apparatus. One distinct feature is the addition of reflective markings on the left rear compartment, which has RIT (rapid intervention team) embedded on the stripe. This compartment contains the truck’s RIT equipment. The truck also has an extended front bumper where it stores two attack lines. Its supply hosebed runs alongside the right side of the apparatus and deploys off the rear of the truck. The aerial ladder is prepiped and pinnable. It has DOT red and white reflective stripping running along the lower beam on the bed section and an insignia sign on both sides of the ladder. Truck 37 is also an advanced life support unit and has the word Paramedic affixed to the rear crew cab doors. 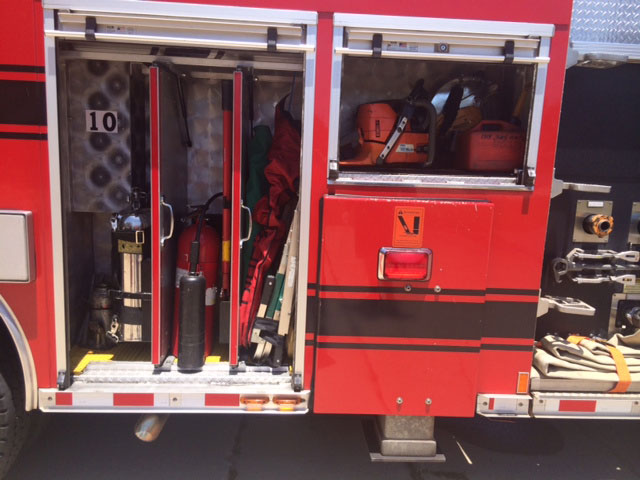 In this edition of Compartment Corner, we are going to look at the two compartments on the officer’s side of Truck 37’s apparatus, just in front of the wheel well, which are compartment numbers 10 and 11.

Compartment number 10’s markings can be seen on the rear wall when you open up the roll-up door and it contains a variety of equipment. It has two vertical slide-out trays with tools and equipment mounted on them. The rear slide-out has a pressurized water can with a carrying strap attached and a dry chemical extinguisher. In between these two items is an eight-pound flathead axe mounted vertically in storage brackets. Sitting to the left side of this tray on the compartment floor is a 20-ton bottle jack, which is secured. On the front slide-out, tray there is a T-handle forked demo tool (Stud Buster as the crew of Truck 37 call it) and large bolt cutter mounted in securing brackets. In between both of the vertical slide-outs are a CO2 fire extinguisher and a 12-ton jack behind it. Sitting in the area towards the right side wall of the compartment are a stair chair, KED extrication device, splinting packages, and an auto lock-out kit with rods and accessories.

The Midway Fire Protection District is a hardworking, energetic and well-trained department that takes pride in serving its community with dedication and professionalism 24/7.

MICHAEL N. CIAMPO is a 30-year veteran of the fire service and a lieutenant in the Fire Department of New York. Previously, he served with the District of Columbia Fire Department. He has a bachelor’s degree in fire science from John Jay College of Criminal Justice in New York City. He is the author of “Compartment Corner” on www.fireapparatus.com. He is the lead instructor for the FDIC International Truck Essentials H.O.T. program. He wrote the Ladder chapter and co-authored the Ventilation chapter for Fire Engineering’s Handbook for Firefighter I and II (Fire Engineering, 2009) and is featured in “Training Minutes” truck company videos on www.FireEngineering.com.