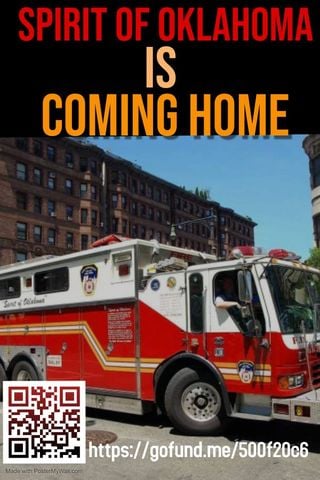 The Spirit of Oklahoma is making its way back home following an anonymous, last-minute $15,000 donation, reports newson6.com.

The Calera (OK) Fire Department had been working to raise funds to purchase and bring home the apparatus, which saw action in both the Oklahoma City Bombing and 9/11 terror attacks.

The department’s fundraising efforts fell about $15,000 short, but in the deadline’s literal final hours an anonymous donor came to the rescue with the cash.

The bond between New York and Oklahoma began 26 years ago when 10 New York firefighters came to the rescue following the Oklahoma City Bombing; those same 10 men lost their lives in the September 11 attacks.

Following the latter attack, students at a Fort Gibson school raised nearly half a million dollars to buy a new truck, which was named the “Spirit of Oklahoma” and sent to New York City to aid. However, it was recently sold at auction.

Officials then attempted to buy the truck from its owner in Massachusetts. He gave the department two weeks—ending on June 15—to raise the $25,000 to buy and transport the truck back to Oklahoma. It would all have been for naught had the anonymous donor not stepped up.

The Spirit of Oklahoma bears the names of the 10 heroes who lost their lives, carrying the legacy of an inseparable bond between the two states.