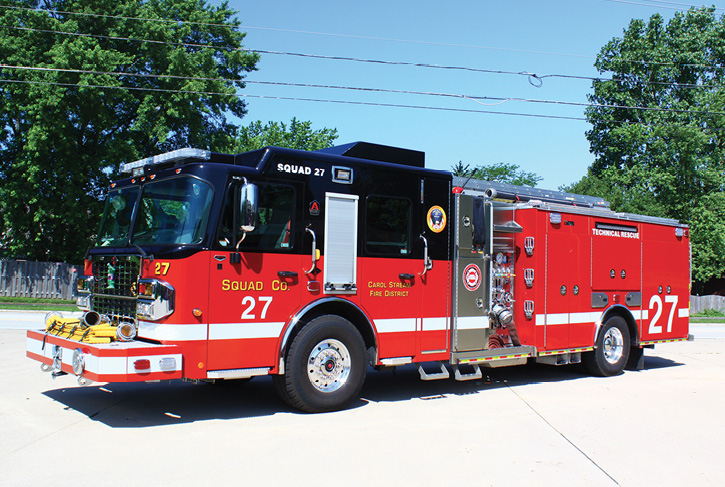 The Village of Carol Stream, Illinois, is located approximately 30 miles west of Chicago and has a population of approximately 46,000 in an area of 15 square miles. The village comprises a mix of single and multifamily residential, commercial, and industrial properties.

The community is protected by the Carol Stream (IL) Fire Protection District, which operates from three stations. Led by Chief Robert S. Hoff, the department fully staffs an engine, a tower ladder, an engine/squad, and three advanced life support ambulances with a total of 54 firefighters, officers, and nine contract paramedics.

The department is an integral part of the West Suburban Fire Rescue Alliance, which consists of a total of six communities that work closely together daily to protect the combined population of almost 250,000. The minimum response to any reported structure fire in any one of the six communities is three engines, three trucks, one heavy rescue, three medic units, and five chiefs. The Carol Stream squad thus responds to myriad calls in all alliance communities.

1 Squad 27 was built by Alexis Fire Equipment on a Spartan Gladiator ELFD chassis with a 10-inch raised roof and an Alexis aluminum body. (Photos by author.)

IN NEED OF A NEW RIG

Until 2017, Carol Stream Engine/Squad 27 was a two-piece unit with the front rig being a basic pumper and the second piece equipped with multiple rescue tools and equipment. Hoff was aware of the difficulties of placing the unit in service when the three personnel—officer and two firefighters—were split up on two pieces of apparatus.

The most obvious solution was to develop specifications for a single engine/squad that would carry most of the equipment required of a heavy rescue and still perform adequately as an engine company. During 2017, the chief formed an apparatus committee to develop detailed specifications. He felt that involving the members of the company in the design would head off many issues. Who knew better what was needed than those who would use it? Chief officers; the department mechanic; and I, a retired fire protection engineer with 50 years of experience, rounded out the group. The goal was to develop specifications for a combined rig that would carry all of the essential day-to-day rescue equipment as well as provide all of the basic engine company equipment needed for its first due and mutual response areas. Hoff knew that only about five percent of apparatus purchases are made by departments who write their own specifications. The other 95 percent are written and provided by vendors.

Several committee meetings were held, and many ideas were tossed back and forth. Detailed specifications were developed, and bids were solicited from various vendors. The successful bidder was Alexis Fire Equipment, which proposed a custom “rescue-pumper” to be built on a Spartan Gladiator ELFD chassis with 10-inch raised roof and an Alexis aluminum body. The heavy-duty body is mounted on a galvanized steel subframe to minimize corrosive effects on the frame. Hemmed-pan-style aluminum compartment doors are used for all doors except for a roll-up door at the back step. The cab has seating for four firefighters and has specially designed compartments for emergency medical services equipment, monitors, and extra batteries for eDRAULIC tools. The front bumper extension contains a recessed toolbox and space for hose storage as well as a five-inch swivel front suction.

Additional features include a Harrison MAS 10-kW hydraulic generator and a Will-Burt Night Scan Chief light tower with four Whelen LED 150-watt lights. A 12,000-pound winch is mounted in the front bumper, and an additional 10,000-pound electric winch that can be mounted at three tie-off points on the rig is provided.

Safety and warning devices stand out on the new squad. It has an Audiovox backup camera system with seven-inch color monitor, Federal EQ2B electronic siren, Whelen LED warning light package, and Whelen and FireTech LED scene light package. A train horn mounted underneath the front bumper rounds out the warning equipment. A lively discussion revolved around what type of horn to use, and finally a horn similar to the FDNY’s Rescue 2 was chosen. The results have been dramatic.

The design of the hose loads reflects Hoff’s prior experience and the input of the company. Fifty feet of five-inch supply hose is preconnected on the front tray plus an additional 25 feet of five-inch dead load. This permits simple stretching of five-inch supply line to a hydrant within 75 feet of the front of the rig. There are two 200-foot preconnects located above the pump panel, one 1¾-inch and the other 2½-inch. The low-profile rear hosebed is designed for easy stretching of lines and is a positive safety factor. It contains 500 feet of five-inch large-diameter hose and two 2½-inch beds each containing 600 feet of 2½-inch line, a 1¼-inch smooth bore nozzle, and a leader line of 100 feet of 1¾-inch line attached to the 2½-inch nozzle. In the event of a fast-spreading fire, the leader lines can be disconnected and two 2½-inch lines can be stretched simultaneously. An Elkhart Vulcan Tiller Bar monitor with stacked tips and mounted on a TFT Extend-A-Gun rounds out the fire attack equipment. Members of the company have used the gun three times for blitz attacks since the rig went in service. Ground ladders are stored on a hydraulic ladder rack located at the top of the body on the officer’s side of the squad. A six-inch hard suction, a 28-foot extension ladder, a 16-foot roof ladder, a 10-foot attic ladder, and a Chicago Style stripping ladder are carried.

The second piece of Squad 27 is the former rescue rig part of the two-piece company. It responds with Squad 27 whenever the company responds out of town and contains technical rescue equipment including tools for collapse, trench, high-angle, and confined space rescue. Squad 27A does not respond to alarms in the village of Carol Stream unless special called. It is critical that it be available when the company responds out of town.

Writing apparatus specifications is no easy task, and any department that embarks on writing its own specifications needs to be prepared to spend many hours on the process. In the instance of Carol Stream, the collaborative effort between officers and company members has resulted in a rig that has been readily accepted by the members of the company. It has few issues and embodies a user-friendly design that the department can be proud of for many years to come.

JIM REGAN is a retired executive with Starr Companies after a 50-year insurance career beginning as a fire protection engineering graduate from the Illinois Institute of Technology. He is a 20-year veteran of the Western Springs (IL) Fire Department and is an apparatus and fire scene photographer with multiple articles and photos published in Fire Engineering.