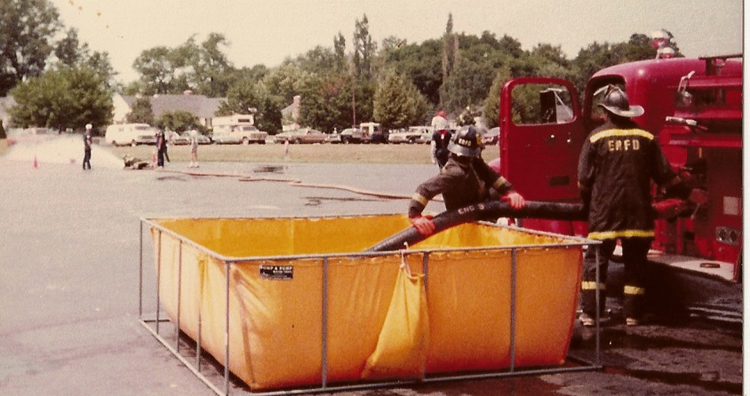 The Raisin Squad has been known to argue and turn against their own for no apparent reason except for having nothing better to do. At morning coffee, a couple of geezers, who could still remember stuff, started arguing about something I had written about backup lines. I had mentioned a pump operator could’ve flaked one out “on the front lawn and charged it.” “That ain’t right—you know better than that.” Say what? “We were always taught not to charge a deuce-and-a-half until it was in place.” I know that. “Well, that’s not what you said. What if that line had to go in the back door? The front lawn coulda been the wrong place.” I said I was merely using it as an example. “But, that’s not what you said. You know how much that charged line weighs? I countered that some backup lines are two-inch and it weighs less. “Two-inch? I never heard of two-inch. Is that another gimmick you salesmen use?” I said I’m retired. Besides, I said it didn’t matter because the heaviest thing you guys have picked up in 10 years is a plate of food at the seniors’ all-you-can-eat buffet. “You shoulda been more specific.” The white hairs were right but I wasn’t going to admit it.

The other week, I mentioned I was working on a piece about drafting. That started a two-day marathon on drafting and drafting drills. The truth be told, the geezers at coffee couldn’t remember the last time they drafted at a fire or even how times they drafted in the last 20 years. But, they and myself collectively became instant experts on the best ways to draft and the best equipment to use to do it. One them said drafting “Is just like sucking water through a straw.” No, I said. God pushes water up the suction hose. Atmospheric pressure pushes down on the water after you remove the air in the hose with the primer. “That’s BS. God ain’t got nothing to do with it. Besides we ain’t supposed to promote religion in the fire station.” I went home. 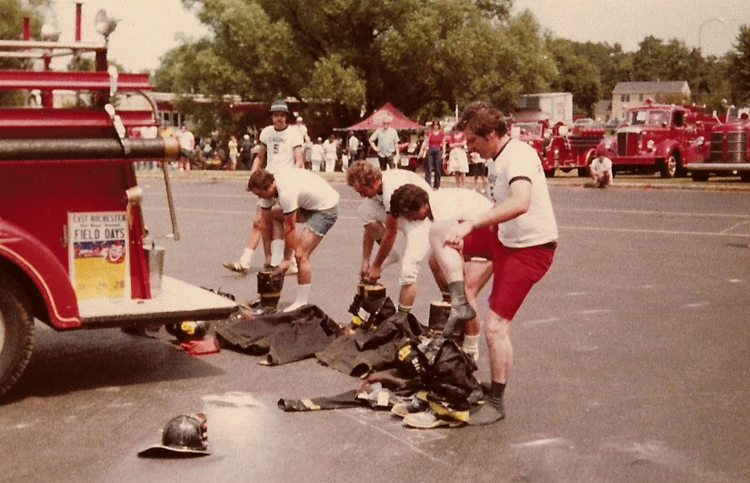 A couple of mornings later, I brought in some photos of a timed “engine company efficiency” contest for antique fire trucks I had participated in sometime in the 1970s. (I can’t remember the exact year—it’s the age thing.) It included drafting. It was set up like this: Four guys—and it was all guys back then—sat in chairs 25 feet behind the pumper. When the whistle blew, they got up and ran to the rig and put their full gear on. The rig was started and drove 50 feet to a portable pond where two of the crew set it up to draft, removing a hard sleeve and a loose strainer that was mounted on the running board. The other two pulled off three lengths of 2½-inch hose from a static bed, removed a nozzle from a running board mount and attached it, then hooked the hose to a discharge. They stretched the line about 100 feet away from the rig toward a target. The rig was primed, the line charged, and the time stopped when the target was hit.

I mentioned the evolution could be used with today’s newer rigs. Well, the raisin squad kicked that around for a couple of cups of coffee. “Nah, that’s stupid. People around here don’t draft anymore.” The next day, one of the devious white hairs said he noticed the pumper in the 1970s contest pulled up so the portable pond was on the driver’s side next to the pump panel. He said after they ran the first evolution, they should’ve run a second one with the portable pond on the officer’s side of the rig. I asked why he would want to make the drill difficult. “That’s why you have drills. Ya can’t guarantee at a real call the water source will always be on the driver’s side.”

That old geezer stole my glory. I thought I had come up with the perfect drafting drill and that son-of-an-unmarried woman made it better. I went home again. In thinking about it, it might be some good training for the young guys to run both evolutions with today’s rigs.