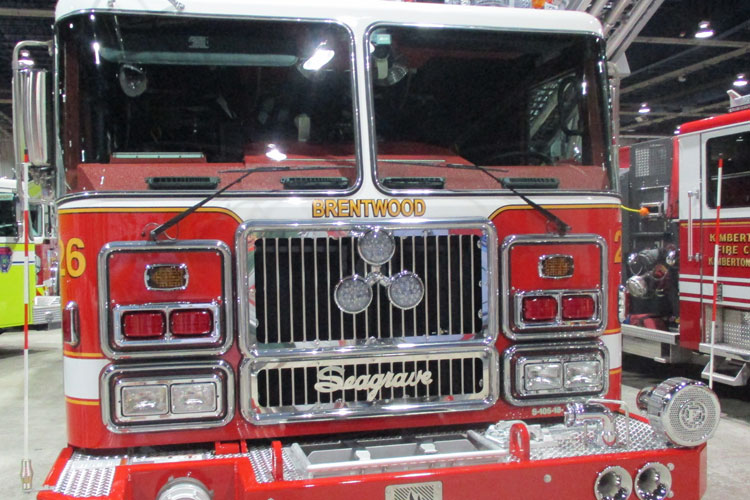 I knew it. I just knew it was going to happen. It was only a matter of time. The “political correctness police” (PCP) is one step closer to becoming reality. From a recent edition of the New York Daily News: “New York State approves gender-neutral titles for fire and police jobs. The terms ‘policeman’ and ‘fireman’ appear headed toward extinction in state law. The Assembly on Tuesday approved a bill that would replace them with the preferred and gender-neutral ‘firefighter’ and ‘police officer.’ ‘Women make up an important part of our police force and firehouses, and it’s time New York State laws reflect that,’ one assembly member said. It was approved by the Senate is headed to the Governor’s office.” I bet they didn’t ask New York State “jakes” and “cops” if they care what they’re called.

The Raisin Squad sounded off about “fireman vs. firefighter” around the morning coffee table: Just who the hell do they think they are? Why ruin a good thing? Next thing, they’ll eliminate the fly on bunker pants. Who cares what they’re called as long as they show up and do their jobs? Can’t do-gooders leave well enough alone?

Later that week, one white hair came in wailing about the Boy Scouts. He said they’re going to eliminate the word “boy” from Boy Scouts because girls want to join. What’ll they call the Girl Scouts? One raisin really got despondent: How the hell am I going to order Girl Scout cookies?

What gives “outsiders” the right to ruin, denigrate and change firematic history, lore, and legend? I wonder if the Dudley-Do-Righters find the term chauffer too demeaning for the fireman that drives the fire truck? The term trucker may survive but hoseman, hose humper, and hoser may be in jeopardy. One Tennessean said laying a line was referred locally as “dropping cotton”—a suicidal statement today. They should find their own sandbox to play in and leave ours alone.

At one of the trade shows, a pumper from the District of Columbia Fire and Emergency Medical Services Department caught my eye. The manufacturer’s representative said this was one of 16 on order to be delivered. There really wasn’t anything new or super innovative on it, but it seemed to be a well laid out, easy-to-use, kick-butt rig for a metropolitan department. And, it appeared that everything on the rig could be done by any manufacturer. I brought a few photos to morning coffee for a “Raisin Review.” 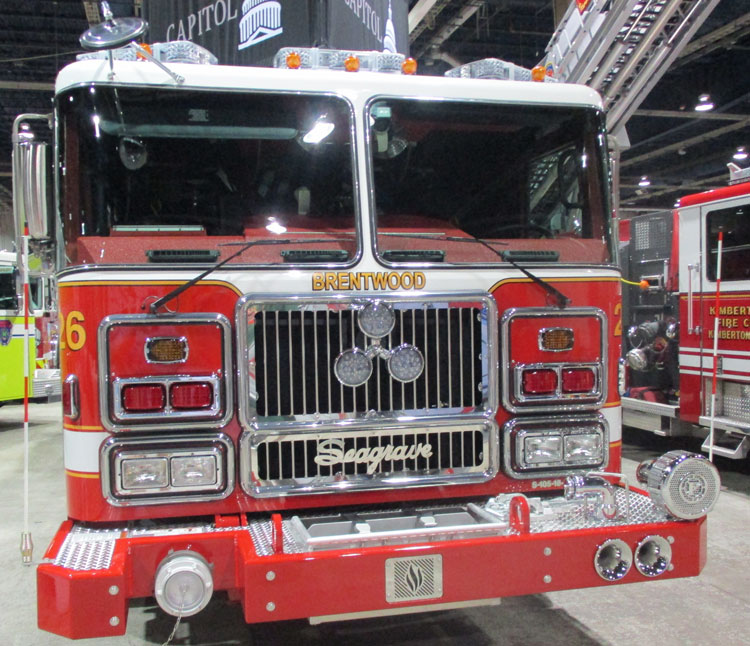 Clean looking front end, Roto-Ray light mounted below the windshield, guide markers on bumper ends, angled front bumper corners, directional lights located away from headlights, mirror on cab to view front bumper. “They even put the name of the neighborhood the rig’ll be stationed in.” 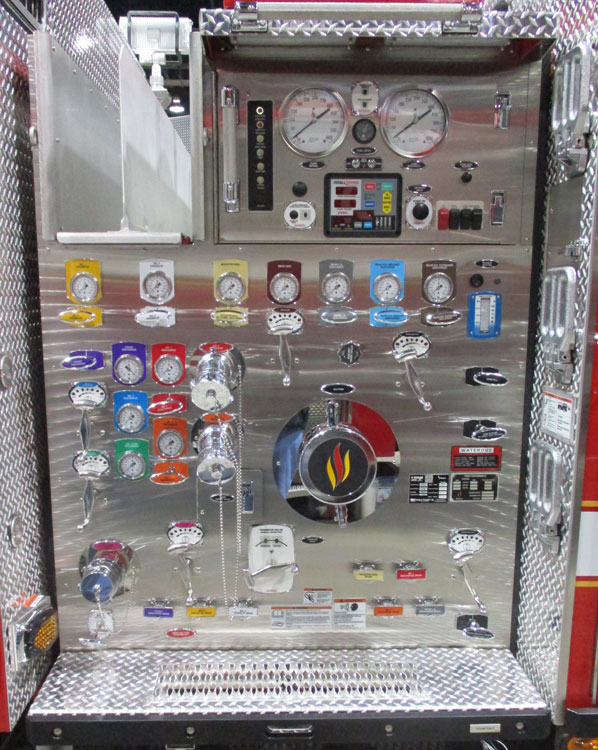 Well laid out panel for twelve discharges, no electric valves, crank handle controllers for the larger valves including front and rear intakes, a two-stage pump, polypropylene rub rails, large master gauges—both go up to 600 psi, crosslays relatively low, angled directional light mounted low on back of cab, grip-strut insert in running board. “Looks like it’s easy to pump—stuff ain’t all crowded and squished together.” 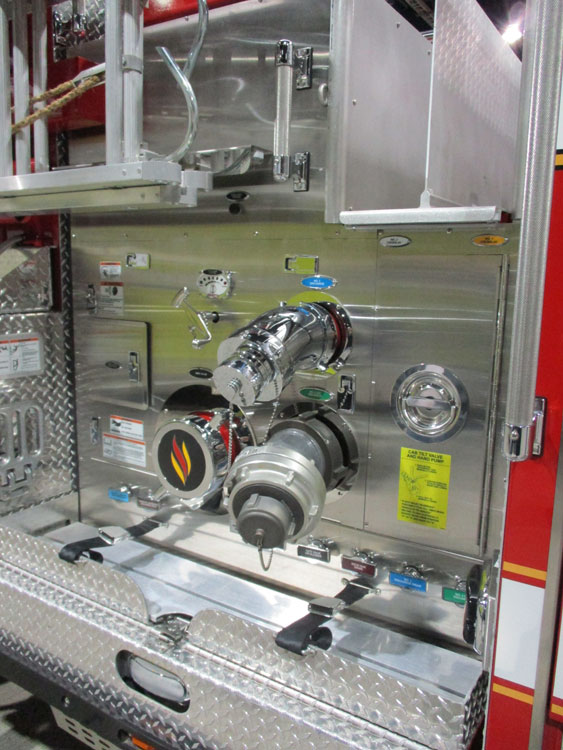 “Hey—there’s two big discharges on this sled, and both are reduced to inch-and-a-half. One’s Storz, and the other looks like regular threads—how come?” 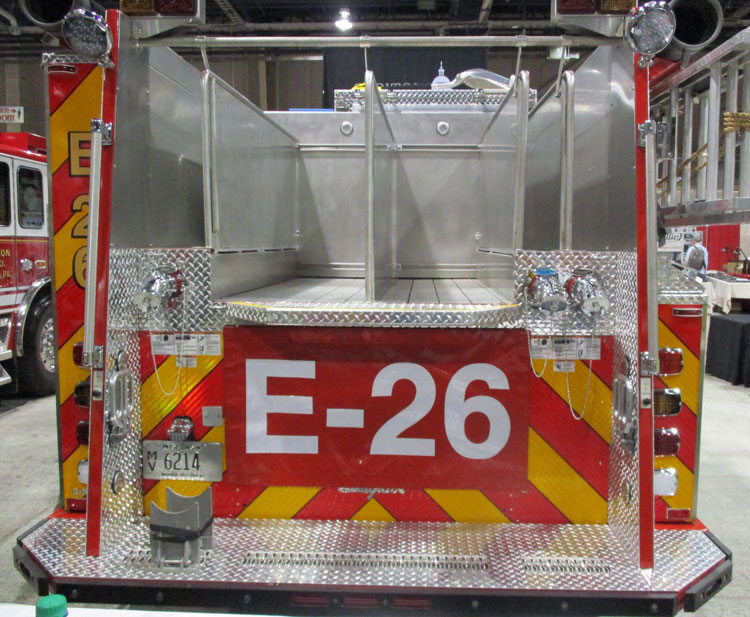 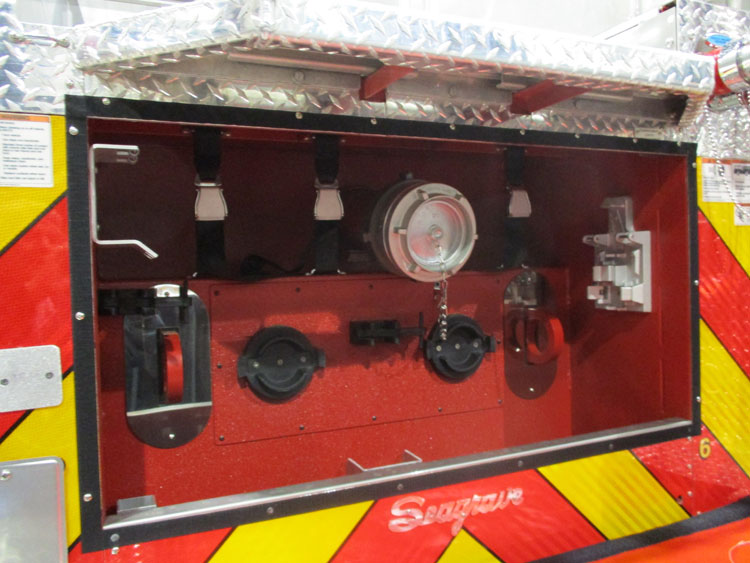 Recessed LDH connection just above rear step, mounts for adaptors and wrenches inside on the walls, tow eyes mounted inside above the running board attached directly to frame rails, straps to hold in a pony section of LDH—looks like it could even be preconnected. “There ain’t no door to mess with or get in your way—just pull off the fabric cover and you’re ready to go.” 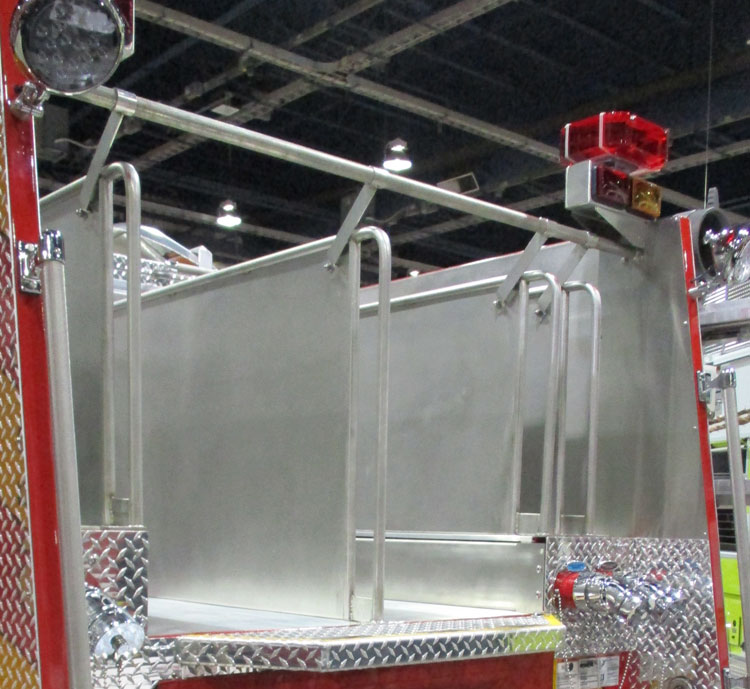