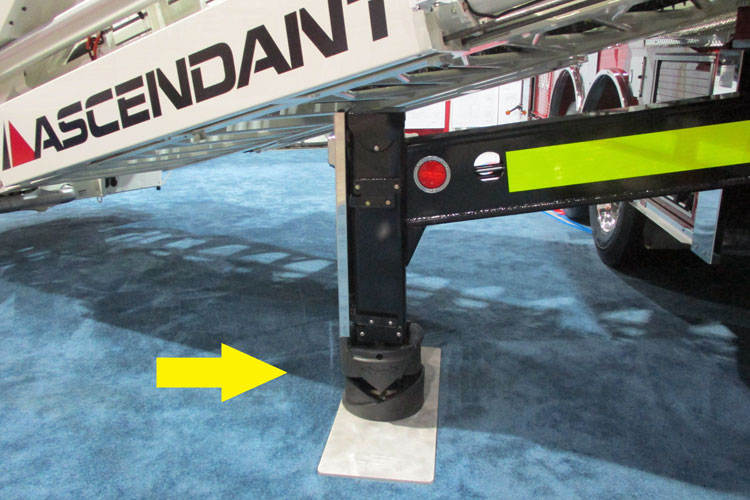 I brought more tradeshow photos to morning coffee to show the Raisin Squad. The jacks on a new Pierce aerial device caught their attention prompting these comments: The rubber cup’s busted. Its some kinda sales gimmick. Ain’t seen nuthin like that in 40 years. Another Squad member asked a Pierce representative at the show to explain it. I was there but can’t remember what the rep said. The other Raisin wasn’t too sure either, so I contacted Pierce. Its just not right saying someone’s rig looks like it’s busted without given them a chance to explain.

Lisa Barwick, Pierce’s director of business development, answered my question. “The Ascendant 100-foot Aerial Tower has integrated ground pads that streamline the setup time for firefighters by eliminating the need to manually throw ground pads at the fire scene. The integrated aluminum ground pads are permanently attached to the stabilizers using a unique positioning cam design. This cam allows the ground pad to be rotated and repositioned if necessary, avoiding obstacles such as curbs or manhole covers, prior to the stabilizer contacting the ground. When work at the fire scene is complete and the stabilizers are being stowed, these cams will automatically rotate the ground pad back to its proper orientation so that it properly stows underneath the vehicle.”

The few sane and rational Squad members understood the Pierce concept. It is a pretty good innovation. Raisins incapable of reality continued with a tirade about city service ladder trucks not needing jacks, the benefit of no cab roofs on aerial ladders, and secret fetishes for wooden ground ladders—especially bangors and crotch poles (https://www.fireapparatusmagazine.com/articles/2014/05/cantankerous-wisdom-glove-boxes-and-crotch-poles.html).

Another morning, one Raisin looking at a fire journal advertisement asked how come there are so many different models of custom cabs and chassis. That started a week-long opinionated discourse pitting the old against the very old. I mentioned there are not too many apparatus chassis makers left. Mack, Maxim, Crown, Hahn, Ward La France, American La France (again), Pemfab, Pirsch, the original FWD, Grumman, the original Hendrickson, and Duplex are no longer. He replied “You old fool—that’s not the question. How come each manufacturer has so many models?” I said Mack only had one model of cab-forward rig—the C-Model, which was replaced later by the CF. An American La France (ALF) aficionado said ALF also had just one style until it added the Pioneer—not a popular design. Seagrave followed its single popular cab with the equally unpopular Invader series. Both the Pioneer and Invader looked like military crash trucks. My nemesis said, “We ain’t livin in the past; we’re talkin about today’s rigs.” Depending on how you count them, there are seven to nine domestic manufacturers of custom cabs and chassis: Pierce; Rosenbauer; Spartan; Sutphen; Seagrave; HME Ahrens-Fox; and the REV group, which currently consists of E-ONE, Ferrara, and KME.

One computer literate member came in the next morning with all sorts of data found on individual manufacturers’ Web sites. There’s no way of knowing if his information is correct or up to date or if he took his meds before researching. E-ONE advertises four chassis: the Cyclone, Typhoon, Quest, and HS. Ferrara’s site also showed four models: Inferno, Igniter, Cinder, and Ultra. Sutphen advertises the Monarch while Spartan shows the Gladiator, Metro Star, Metro Star X and Metro Star RT.

Seagrave advertises the Marauder, Attacker, and Capital. Rosenbauer shows the Commander, Warrior, and Avenger. KME has the Predator, Panther, and Severe Service. It appears HME Ahren-Fox has the AF1, HME SFO, the HME 1871-Spectr, and HME 1871-W. Pierce had the most with seven: the ArrowXT, Dash, Enforcer, Impel, Saber, Velocity, and Quantum.

Squad members revisited the topic later when the discussion turned into whether the different named chassis were models, styles, or types. None of us knew the difference between a model, a style, or a type! I said some use the same cab structure and call it a different name because of the options available like the size motor. The Squad tossed around whether it could be a totally different cab shape, material, maximum gross vehicle weight rating (GVWR), cab width, cramp angle, or the number of seats as reasons for the different names. The discussion ended when one white hair asked if the different names mean just the cab or the cab AND the chassis? Too many questions; I went home. Again, it is unknown if any data collected online is up to date. Contact the vendors if you want accurate and time-sensitive information.

We steered our babbling back to the good old days where Raisins are most comfortable. One real old-timer (hearing aid and store-bought teeth old) lamented about the days when apparatus manufacturers built everything on a rig from the frame rails up. Some younger members didn’t realize that and also didn’t believe those of us who did. To prove it, I contacted two “well-seasoned” apparatus historians and authors of numerous books about fire trucks—Harvey Eckart and Walt McCall.

I asked them what the last manufacturer was to build everything on a rig including the pump, frame, cab, body, tank, and motor. It’s obvious Eckart is a rabid Mack fan. “What you are referring to is known as ‘vertical integration’ in vehicle manufacturing. A producer making 100 percent of the product would be 100 percent vertically integrated. Of course, this has never happened as most of the smaller items are purchased, but Ford came close back when he owned his own rubber plantation, mines, and forests. In trucks, vertical integration has always been the rally cry of Mack. It built all its major components (with a few exceptions) until it started outsourcing cabs in the 1970s. A substantially integrated fire apparatus builder would make its own engines, pumps, cabs, and bodies in its own factories. The chassis is sometimes included, but this is quite murky. In the very early days, some of the major ones did make their own transmissions and axles, but this is very hard to document. A history on Ahrens Fox says it started using vendor items in the late 1920s. Today, nobody BUILDS their own chassis—they only ASSEMBLE their own chassis. Mack was the only one that consistently BUILT its own chassis components. Mack is not a candidate for the integrated fire truck category since it never built its own pump.

“Regarding your question specifically, I believe ALF, Seagrave, and Ahrens Fox were the only ones to build their own engines, pumps, and bodies. As to the last one to do so¸ I think the prize goes to Seagrave as I know it built its last pump in 1978, and I read where it was still offering its own motors in 1968. I believe ALF built its last engines in 1961 and do not know the date of its last pump. Today there is not a single custom builder that makes its own engines. When Mack left the market in 1985, it was the only one building its own diesel engines, and the only one still offering a CUSTOM conventional cab line, as well as a low cab forward model in addition to its own regular cab forward CF line. Just a note: I do not regard a component designed partially by a manufacturer but built by another as being ‘their’ product. I am distressed that some apparatus manufacturers fall into this category.”

They collaborated their research. From McCall to Eckart: “Thanks for sharing this, Harv—an excellent subject worthy of scrutiny. You’ve covered it very well here. A nice piece of important research. ALF made its last V12 engine, the Lycoming-derived small V12 (introduced ca. 1935) in 1963. The big “E” V12, designed and produced by ALF and introduced in 1931, went out of production in 1957. I don’t know when Elmira (ALF) produced its last pumps. I didn’t realize that Seagrave offered its own V12 as late as 1968, but it was entirely probable. They were certainly still delivering them in the early 1960s.”

And, we still didn’t figure out what the difference is between a model, a style or a type of cab, or cab and chassis. Nap time.