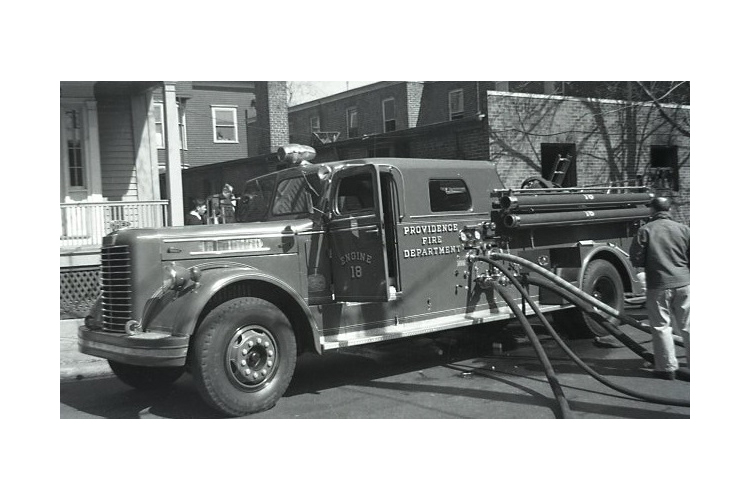 One of the raisins brought in an old yellowed and wrinkled up Peter Pirsch advertisement from 1973 showing a tractor-drawn aerial ladder (TDA). It was a real ladder truck—without a pump. Mounted on the side of the trailer was a big old deck gun, probably a MacIntyer or Eastman, with the long stream straightener and straight tips. It looks like it meant business. It was piped to a siamese so it could be supplied by a pumper. I consider a deck gun a master stream device that is permanently mounted on a rig and is usually, but not necessarily always, hard piped to an onboard pump. A portable/deck monitor is one that can be used on top that also can be removed and used on the ground. Again, those are my own definitions. Refer to your favorite text to find a definition to your liking. We white hairs do all the time.

Anyhow, morning coffee ended up in a donnybrook about the merits of having a permanently mounted deck gun on a ladder truck (aka truck company). It didn’t matter if it was a quint. It lasted for a couple of days until most of us either forgot what we were arguing about or what side we took. Bear in mind that from the early 1970s to the mid 1990s is when the majority of the wrinkle squad were the most active.

I am a proponent of having a deck gun on a ladder truck because the truck company is always going to be close to the building. Besides, if you’re using master streams, the pumpers belong on hydrants. Others’ comments are italicized. Mine are in quotes. What if the walls collapse? “You should stay out of the collapse zone.” Well, it is cheaper to lose a pumper. “It doesn’t matter what it is, it shouldn’t be that close.” That depends who the driver is. I let it go. A couple of days later I brought some photos to morning coffee showing new quints with prepiped deck guns. It didn’t matter. Those are quints. “So what?” You were talking about ladder trucks. “The principle is the same.” Harry, the quintessential bellyacher and resident tight wad: You’re too old fashioned—times have changed. “Times have changed? You old fool, you’ve been living in the past for the past 10 years.”

He should’ve been a politician. His philosophy is if you don’t like the idea but can’t discredit it or disprove it, kill the messenger. And, he’s so miserly that he can bite a nickel so hard the buffalo will pass gas. When I said to give me one good reason why you shouldn’t put a deck gun on a ladder truck, his answer was predictable. It’s too expensive. “Ah, never mind.” I left. 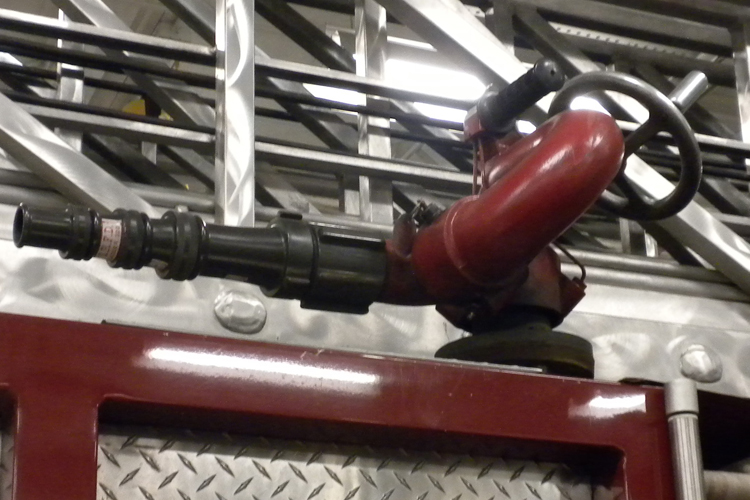 This prepiped master stream (above and below) is on the passenger’s side of a quint in East Rochester, New York.  If the barrel is not tilted down to the deck when not in use, it should be supported with a stand to prevent undue stress on the gun’s internal gears. Photo by author. 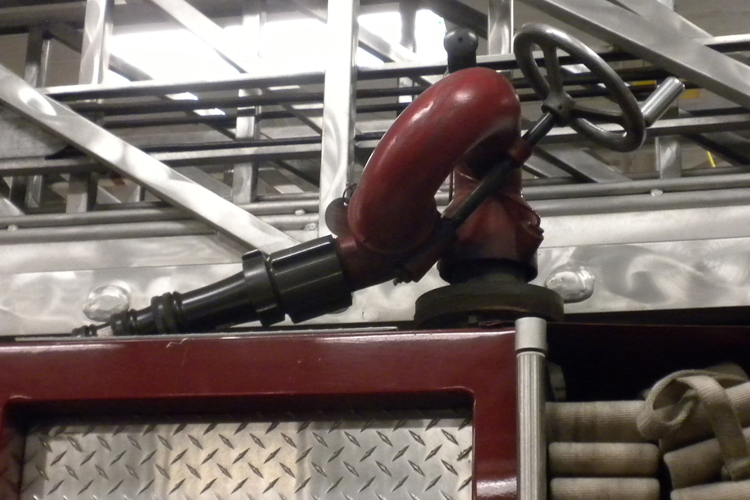 Early the next morning, one of the young guys who overheard the previous discussion mentioned the deck guns in the photos were actually combination portable/deck monitors hard piped to the rig’s pump that also could be removed and used with a separate base section as a portable. I mentioned I don’t really like them. He said: But, didn’t you sell a whole bunch of them? “Yeah, but that was a long time ago. Times have changed.” You sound like Harry. I went tilt. I got red in the face and started stammering and stuttering. Easy there old timer—you’re going to pop that vein in your neck.

After calming down, we bantered bank and forth—not about deck guns and ladder trucks but about pumpers and combination portable/deck monitors compared to the newer lightweight portable ground monitors that everyone is preconnecting. They go by monikers including Blitzfire, Mercury, and RAM.

My reasoning for not liking the combination units: A firefighter has to climb on top of the rig to remove it. That could be hazardous if access to the top is not “firefighter friendly” or if there’s inclement weather. It can be downright dangerous if a white coat is bellowing in your ear to hurry it up because we might lose the whole block. Then you have to find the portable base and cart it and any accessories (tips, chains, etc.) to wherever you’re going. Then you’ve got to estimate the distance and stretch a line or lines to it. It could be a single LDH or one or two 2½-inch or 3-inch lines with 2½-inch couplings or even one each of the smaller. Who, I said, is up on all those friction losses that would have to be calculated. With the newer preconnected attack monitors, friction loss and discharge pressures can be precalculated. And, one firefighter can easily put one into service. I said I’d prefer a prepiped permanent deck gun on the rig. Use a preconnected ground monitor for a portable master stream.

We were amicably going back and forth when my buddy Harry wandered in. That ain’t right. You ain’t comparing apples to apples. “What the hell are you talking about, Harry?” Those preconnected ground monitors only flow 500 gallons per minute, and the regular portable monitors flow twice as much. You’re only getting half the water. “Who told you that?” I looked it up in the Darley catalog. “For God’s sake Harry, buy two of the damn things and preconnect both of them.” It’s too expensive. I couldn’t finish my coffee. I went home for a nap. That old man gave me a migraine.