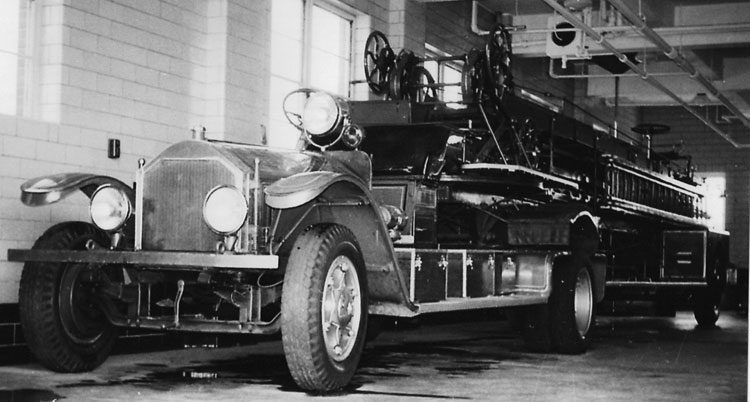 Ever notice how a simple discussion can lead into one long drawn-out affair after another? Joe Merrill, who does inside apparatus sales at Spencer Manufacturing, and I were discussing fire pump discharges and, in particular, why the NFPA 1901, Standard for Automotive Fire Apparatus, does not address the valve and piping size for large-diameter discharges. I don’t think it makes sense, but 1901’s sentence 3.3.51 Discharge Outlet Size says: “The nominal size of the first hose connection from the pump on a discharge.” It doesn’t say anything about the size valve or piping or what the discharge has to be used for such as a deck gun. Merrill and I beat that topic to death. My final take is that it is unfortunate the valve and piping does not count. Some fire departments may mistakenly believe just because a discharge has an LDH fitting it will flow big water. Apparatus manufacturers may have different designs and claim different flows for an LDH discharge in the same location. In order to keep everyone on the same page and to ensure a desired flow, departments should specify a certified flow test on the discharge. In fact, that’s one requirement the NFPA should incorporate in 1901. That’ll separate the chaff from the wheat.

Bill Peters, author of the Fire Apparatus Purchasing Handbook and a member of NFPA 1901’s Technical Committee weighed in that NFPA 1901 sentence 16.7.1 indicates outlet connections of 2½-inch or larger must be provided to discharge the rated capacity of the pump with flow rates as shown in Table 16.7.1. He adds that the Annex says “The purpose of this section is to provide sufficient discharge outlet connections to allow the apparatus to relay-supply the rated capacity of the pump for a distance of 1,200 ft or greater.”

Splitting hairs with NFPA 1901 as I occasionally do, I wonder why they’re concerned with moving water 1,200 feet but don’t require an appropriate amount of hose to accomplish it. I broached the subject with the raisins at morning coffee. They were brutal. “It ain’t NFPA’s business telling us how far we gotta move the water. They oughta just concern themselves with the right number of outlets to get water out of the pump. If the fire department wantd to shoot water out of a deck gun or the rig’s tailpipe, that’s the department’s business.”

Back to the conversation with Merrill, another question came up neither of us could definitively answer. It was, “When calculating the number of discharges to determine a pump’s rating, does the discharge to a deck gun (monitor) above a pump house count?” When I asked Peters, he replied, “Since a deck gun is not required, there is no mention of a rating for it.” I asked Joe Messmer, owner of Summit Fire Apparatus, the same question. He answered, “I feel this is a loaded question! My first inclination is certainly, why couldn’t you? If you can get a gun big enough and an opening in the pump large enough why can’t you?” Then he added, “The way you’re asking makes me suspicious!” Bear in mind, Joe is also a white hair and an honorary member of the Raisin Squad. Both answers were simple enough and right to the point borderline on being brutally honest. At next morning’s coffee, the raisins were also brutal. “Who cares?” “What difference does it make?” “It don’t matter what it’s rated for ‘cause it’s only a foot or so from the pump to the gun.” “Ya need more water, ya raise the pump pressure. Everyone knows that.”

Trying to get myself off-the-hook, I said maybe the department wants to use the deck gun as an extra discharge for another hoseline. They might be trying to save money on a discharge that might only be used once in a blue moon. That was blasphemy in their eyes. “That’s stupid. They should’ve ordered enough outlets to begin with.” Looking for reinforcements, I asked Jim Kirvida, owner of CustomFIRE Apparatus, if CustomFIRE ever counted a deck gun discharge for an NFPA rating. He replied, “We have done so when the monitor outlet had an NH hose fitting, but it then had to have a slow closing valve (if the valve was 3-inch).” I felt vindicated. I thought Messmer would also bail me out, but he said you’d have to put a downturn fitting on the gun if used as a discharge because of its height off the ground, and he’d never seen anything like that. Damn, bagged by a fellow seasoned citizen. I tried again with the Raisin Squad to justify using a deck gun as a back-up discharge for a 2½-inch handline. “Who ever heard of such a thing?” “You’re making this stuff up.” “That’s stupid.”

Regardless, I think a fire department should realize if it is desperate for another hoseline discharge on the fireground, there’s always an NH fitting on the deck gun. And, many deck guns have a downward vertical movement of greater than 40 degrees from horizontal. If you want to ensure a flow from an LDH discharge you are contemplating, have the manufacturer prove it! Ask your favorite vendor if you can count the flow from the first NH thread on a deck gun discharge toward the rig’s NFPA 1901 rating. Ask for it in writing, and see if he loses his prime! As one of the geezers at morning coffee said, “You’re just saying this to rile us up over coffee.” Yep, and it worked.