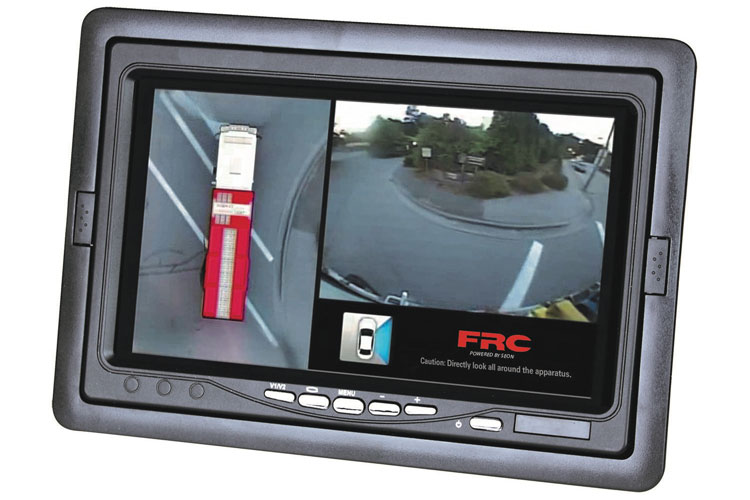 A variety of cameras and camera systems are being used on fire apparatus to help drivers negotiate crowded roads and navigate safely to a fire scene.

Cameras that provide 360-degree views of an apparatus, side-mounted cameras, front-mounts, and backup cameras have become popular tools to help prevent incidents either on the way to an emergency, on the scene itself, or returning to the station. Camera systems also are being used to document runs and fire scene operations to be saved in a department’s electronic files.

Mike Dupay, division vice president of marketing for Safe Fleet, which owns FRC, says FRC makes the InView 360 all-around video system for emergency apparatus drivers. “The system gives a bird’s-eye view from above the fire truck using four strategically placed cameras on the vehicle,” he says. “The video feed goes into the cab of the vehicle while specialized software calibrates the system to stitch the video together to create the bird’s-eye view – much like a drone hovering over the vehicle. The system allows the driver to see up to eight feet in diameter around the vehicle while it’s moving.”

Kevin Brady, Safe Fleet’s senior product manager for video, notes that the monitor also can display a split screen, showing left, right, forward, or backing views. “It allows a driver the ability to see a tight space that he might have to get into and also prevents him from backing into an obstruction,” Brady says. “As an option, InView 360 can record to a 500-gigabyte digital video recorder (DVR) hard drive that will record up to 29 days at about eight hours a day.”

Jim Fecile, national sales manager, public safety, Rosco Vision Systems, says his company makes a variety of cameras used on fire and emergency medical service (EMS) apparatus, from single-camera and monitor backup units to two-camera, three-camera, and four-camera 360-degree systems. “Our standalone backup camera connected to a five-inch or seven-inch monitor is triggered by the reverse signal,” Fecile says, “and sometimes EMS units will have a single camera in the patient box to give the driver a view of what’s happening back there. We also offer two- and three-camera systems where you have two side cameras for use when switching lanes or a combination of those with a backup camera.”

Fecile notes that four-camera systems are used to generate a 360-degree view of the vehicle that can be viewed when it is in motion and also stationary on a scene. “The cameras are connected to software that stitches together an overhead view of the vehicle,” he says. “The overhead view is always available on the right side of the display, and when you trigger a turn or back up, that shows up on the left.” The radius of the 360-degree view is at least 10 feet and often farther out, depending on how high on the rig the cameras are mounted, Fecile says.

Fecile says that Rosco Vision Systems is testing software to have the 360-degree system display a visual box around the vehicle to allow a driver to set up an aerial’s outriggers at a scene without having any obstructions in the path of the jacks. He expects the new software to be available by the end of summer.

Joseph Schechter, executive vice president of Rear View Safety Inc., notes that Rear View Safety was acquired by Safe Fleet in 2016, and while it works in collaboration with FRC with its camera products, it also is offering a number of new products, especially in terms of recording devices. “The wireless cameras we have now use a pairing process with Bluetooth that can range from a single channel to four-channel wireless,” Schechter says. “You can have four independent views or a split screen that might show a side view when turning and another view.”

Schechter says the system has a 120-degree view to the side, which shows three lanes of traffic, giving a driver visual safety for lane changes and turns, while the rear camera will see 200 feet back. “The system uses one monitor with a split screen,” he says. “When you trigger a turn, you see that turn and not the other screens, and when you finish the turn or lane change, there’s a five-second delay and then the monitor goes back to either a split screen or four views, depending on the user’s choice.”

Rear View Safety offers digital color displays in five- and seven-inch sizes for its wireless system and up to 15 inches for a display with a wired camera. “A lot of customers add a display to the rear driver in a tractor drawn aerial (TDA),” Schechter points out, “so the TDA operator sees what the driver sees. We also have waterproof monitors that can be installed on pump panels and at an aerial control station.”

Intec offers a multicamera view that can cycle in sequence if the department desires, Don Nama II, president of Intec Video Systems Inc., notes. “With the cycle button, you get a full screen around the vehicle, about five seconds per screen – left, right, and rear – so the driver can be sure all is clear and no personnel are moving around the vehicle. Intec’s multicamera system typically uses five cameras,” he adds.

Nama says his company has a complete product line of cameras for the fire industry, from Car Vision single-camera systems through multi cameras up to five units, with the option to add a sixth for input. “These cameras have a good field of view and low light sensitivity,” Nama points out. “The real solution for fire departments is in our multichannel controller that allows each camera to be individually triggered, like left or right turn and rear camera. There’s also a trigger to bring up two, three, or four cameras, which is programmable into our controller.”

Nama says Intec’s Radar is additional technology that can be added to the Car Vision system, allowing detection of pedestrians and obstacles in range of the radar. The system, which gives drivers a series of more aggressive warnings as the threat moves closer, also can trigger an outside strobe light to alert pedestrians they are getting too close to the rig.

“We have had some applications where we put an extra camera on a rear-mount aerial platform over the cab so the driver can see things up high above the platform as he’s driving,” Nama says. “We also have put cameras on monitors, usually on aerials, and are able to flush mount cameras on vehicles to make them look unobtrusive.”

Brady points out that all the DVRs FRC uses have G-force inertia sensors that would tag an event in the case of a collision. “They are not deleted until they are downloaded,” he adds, “and there is an emergency button in the cab for the driver to create a recorded event on his own. The GPS sensor in the DVR always knows the location coordinates, speed, and other data of the vehicle using passive telematics in our software.”

In addition, Brady says, “The DVR can be set to record for up to two hours if the vehicle is turned off and the crew leaves the vehicle. The default setting is for the cameras to continue to record for one hour.”

Dupay notes that with the GPS tracking, InView 360 “is good for positioning a fire apparatus at a scene, outrigger placement, and drop tank deployment.” He adds that the FRC Guardian package can be added to the system where there is no monitor viewing but cameras run directly to a DVR. “We added Smart-Reach WiFi and cellular as options to Guardian, where you don’t have to download video by pulling the hard drive and putting it in a dock,” he says, “but where the wireless downloads automatically when it’s within a mile of the station.”

At FDIC International 2017, FRC launched InView DS2, designed for smaller vehicles like incident commander (IC) and battalion chief vehicles and ambulances. “It’s a two-channel event recording system with a front dash camera and a second camera that can be up to 25 feet from the first one,” Dupay says. “The data go onto an SD card that plugs into the vehicle’s J1939 CAN Bus system, so it will also record engine readings. It even creates its own WiFi signal.”

Dupay notes that the company soon will have a rear-view camera option for both wireless and wired systems as well as a quad view monitor that will show four views on a quartered split screen.

Rear View Safety also has mobile DVR units that record from two to eight channels, allowing an IC to use eight cameras to give him a bird’s-eye view of a scene. “With its built-in GPS, the IC will be seeing things in real time, and he can view it on a smartphone, laptop, or desktop,” Schechter adds.

“All our camera systems can be connected to our DV440 recording device that’s hardwired into the system,” Fecile notes. Length of recording time depends on the size of the SD card used in the system.

Blake Gasca, chief executive officer of Convoy Technologies, says one of his company’s focal points is live video streaming in real time. “Ten years ago, cameras were used from a safety perspective, but now they are a productivity tool where the cameras record video images to a DVR or SD card, and if something happened they could pull up the video for the insurance company,” Gasca says. “When long-term evolution (LTE) came along around 2012, people wanted to be able to offload video remotely and to be able to log in and see it in real time.”

Software and the Future

Convoy Technologies is the hardware side of the company’s camera business, Gasca points out, while MuHu is the software service side. MuHu offers MuHu Live, which is a “video and analytics platform that can be used with our cameras and tied into other databases. There’s an option for a live video feed and also storage to the cloud,” he adds. “Pierce Manufacturing and KME use our products as standard safety products on their vehicles.”

The wireless camera systems that Convoy Technologies uses can be connected to a local area network, Gasca says, if the vehicle itself is connected to a data provider like Verizon or AT&T. “We use Internet protocol cameras, forward looking infrared cameras that can see through low-light and no-light situations, and standard infrared cameras that are able to see in and around a vehicle.” He continues, “Cameras are more common than ever before on vehicles. The next step is a firefighter body camera that wirelessly communicates through cellular service to the cloud. If there’s no cell reception, then it will store the data locally on his body unit.”