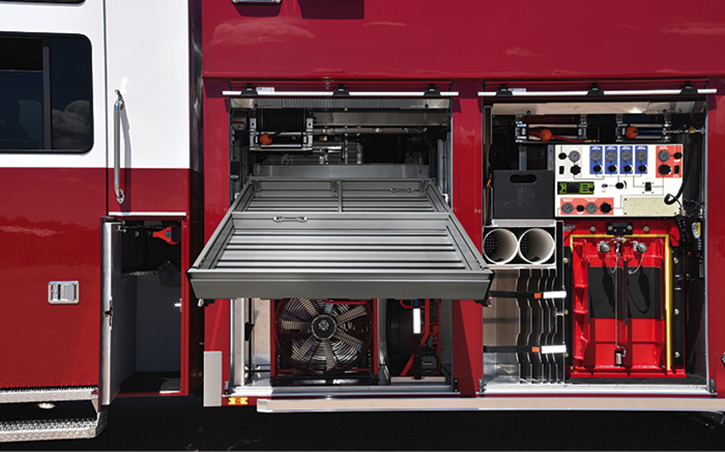 Names often have a way of summing things up. Take, for instance, OnScene Solutions. Founded 16 years ago by Clay Horst, the company set out to fill holes in the firefighting industry with apparatus solutions that would make equipment more visible and readily accessible when arriving on scene.

“When the company started, we identified what we considered a hole in the industry—the fact there was only one cargo slide available to the entire fire service,” says Horst, who is also the general manager of the business based in Windsor, Colorado. “It was a steel, welded slide. It was functional, but in our mind, it did not complement the fit and finish of today’s modern fire apparatus.”

Horst and his team decided the fire service deserved better and developed a slide that was “more of a machine-shop-type product” constructed of anodized aluminum and urethane wheels, much like those found on inline skates. “We have a very robust build that supports up to a thousand pounds of equipment at full extension for extended periods without failure,” Horst says. The slides were built with corrosion-resistant materials for customers in coastal regions, especially areas that use corrosive chemicals for winter road treatment. “The primary focus at the inception of the company was to build the fire service’s best quality cargo slide with a lifetime warranty—period,” Horst says.

2 OnScene Solutions has been creating roll-out apparatus equipment slides and cargo trays for the past 16 years. The slides and companion lighting systems are used by virtually all major apparatus builders in the country.

While the depth of the slides is often standardized at 24 inches, the dimensions of upper compartment slides can vary significantly, which is why OnScene builds slides to customer specifications.

As the slides were refined, the team noticed apparatus manufacturers were fighting a tremendous amperage draw on fire trucks. “Some trucks had two or three alternators to keep up with demand,” Horst says. “And, compounding that was the relatively archaic incandescent lighting.” Being in the compartment slide business, Horst said it made sense for the company to offer compartment lighting.

Horst recalls a time when one of the industry’s truck builders called OnScene “the Coca Cola of compartment lighting.” “For a new startup company to jump out as quickly as we did, it was wonderful,” Horst says. Part of the company’s success, according to Horst, is its “no BS lifetime warranty” on virtually everything the company builds right here in the USA. “We don’t build things to wear out so that they need to be replaced,” he says. “We’re not always the least expensive, but our products are built to last.”

Tying the compartment component business together is the company’s cargo strap line. “Besides a standard [hook-and-loop] line, we also make a unique strap made of aluminum and brass,” says Horst, noting that competing plastic buckle straps can break when cold. OnScene’s “fire buckle” design also can be easily actuated with gloved hands.

3 OnScene manufactures trays that not only slide out but tip down for easier access to equipment.

4 A helmet bracket offered by OnScene Solutions works with nearly any helmet and is third-party tested to 9G rollover impact standards.

Since its inception, OnScene has been on “the pioneering edge” of product development, Horst says, leading to the company’s next solution: a new line of helmet brackets compliant with National Fire Protection (NFPA) 1901, Standard for Automotive Fire Apparatus. The now-patented brackets feature multiple adjustment points to fit nearly any helmet with a brim, including European-style helmets, and OnScene has third-party certification to meet the NFPA’s 9G rollover impact standard.

And to keep on with the company’s tradition of innovation, OnScene debuted a new cargo tray just this spring. The tray features customizable tray separators and adjustable tie-downs for cargo securement versatility, along with optional fold-down gates to eliminate heavy lifting over the tray’s lip.

OnScene also developed a new cargo lift system with prototypes unveiled during the past two FDIC Internationals to garner feedback from OEMs, engineers, and departments to ensure that the design would easily integrate into their apparatus and meet department needs. The X-30 system, which is gearing up for 2021 production, is rated for 500 pounds of equipment and has a series of motors and gears that can propel the cargo tray out and down up to 30 inches with the push of a button.

“We’re seeing that as these fire apparatus get taller, there is more usable space up high, but this space is very difficult to access for an average-height person,” Horst states. To add to the X-30’s accessibility, the system can be equipped with OnScene’s new tray with fold-down gate.

With its 500-pound capacity, Horst says the new lift is far more versatile than standard out-and-down trays. And as OnScene developed the new lift, the company discovered there are a lot of applications, especially for over-the-wheel compartments, according to Horst. “Some of these compartments are horribly high,” he says. “If you want to put cribbing in it, or something like [rescue tools], you’re going to need something like this. The X-30 also has its advantages as a lower compartment slide because we’re seeing more deployment of robots, heavy pumps, and outboard engines, so with the lay-down tray, these heavy items can be deployed right onto the ground.”

In the end, Horst, says the company is all about eliminating injuries. “We all know now how costly back injuries are for municipalities, and we’re in that realm where we are either faced with litigation for injuries or we try to mitigate those injuries before they happen,” he says. “Whether it’s the X-30 or some other product, we try to mitigate injuries and promote ease of use in everything we do.”

And to make it easier for firefighters to use, OnScene uses a kind of control that nearly everyone on the planet recognizes. “The most common thing we all use is a garage door opener,” Horst says. “We said the control has to work in a linear fashion, similar to what everybody already knows.” The design also factors in moderate uneven tray loading when equipment may be more heavily positioned on one side of the tray. The electric motors are powered by 12 or 24 volts, Horst says, noting two motors propel the slides out from the apparatus while two other motors control descent and ascent. “Each pod is independent of one another, so there’s no cross section,” Horst says, noting that this feature allows for true “pass-through” cargo capability. Sensors also accommodate for potential uneven tray loads.

As a privately held, limited liability corporation, OnScene Solutions has the flexibility to work with all apparatus builders as well as end user customers, says Horst, who has a background in the heavy, over-the-road trucking business.

Horst has also worked as a service manager for Ford, General Motors, and Chrysler. And growing up in rural Nebraska, he says he’s even been kind of an ad hoc firefighter as everybody ran to help during emergencies.

Instead, of having a cadre of traveling salespeople, OnScene Solutions works with existing fire service apparatus and equipment dealers, who in turn take products to OEMs for integration into the specifications, Horst explains. “We take care of strategic [trade] shows and work very closely with the dealer network,” Horst said.

As a small company, Horst says he “wears about 10 different hats,” and each person among his six- to 10-member staff is greatly valued for their diversity and energy. “They are very much a part of the company,” Horst said. “When they bring me ideas or changes that we need to make, they know they can come into my office and make that request.”

Similar to his open-door staff policy, Horst also appreciates when firefighters and those involved in the industry approach the company with ideas that improve safety and efficiency. “We are always open to ideas, and when we see something that we think has potential, we’ll consider negotiating,” says Horst, which can lead to patent inclusion; royalty offers; or, in some cases, the outright purchase of the idea.

The company’s forcible entry device, called the Wellz Tool, is an example of collaboration with a local firefighter, Horst says. “This particular firefighter wanted to make a door wedge that could also function as a halligan bar,” Horst says. As OnScene expanded on the firefighter’s idea, the tool evolved into a foldable personal carry device with many functional capabilities. Lightweight yet high-strength, the aluminum design can breach doors, block hinges, pry objects, shut off gas meters, and open fire hydrants. “The Wellz Tool is much more of an end-user product,” Horst says. “And even though it didn’t fall into our apparatus solutions wheelhouse, we saw the potential and brought it to market.”

5 The Wellz Tool is a foldable, pocket-size device that can breach doors, block hinges, pry objects, shut off gas meters, and open hydrants while incorporating functions of a halligan.

OnScene Solutions also recently started helping a Canadian company manufacture the SafeTSystem air cylinder management system, which consists of bottle carriers, hand carts, and station racks that aid in the safe and easy transport of air bottles. “The company approached us, asking if we could help them break into the United States market, and we found that the products fit right into our lineup of solutions that aid in on-scene response,” Horst says.

6 Since its inception, OnScene Solutions has incorporated machine-shop techniques, including use of computer numerical control (CNC) machines to build high-quality products.

And when OnScene Solutions isn’t busy manufacturing solutions for the fire industry, the company also markets slides for pickup users, recreational vehicles, and race trailers. “We pretty much build solutions,” Horst adds. “All day long, that’s what we do: build solutions.”

ED BALLAM is the assistant chief of the Haverhill Corner (NH) Fire Department and a National Registered EMT. He is also a deputy forest fire warden for the New Hampshire Division of Forests and Lands. He has been a journalist for more than 35 years, working for a variety of publications, including employment as managing editor of a national fire service trade journal for more than a decade.

Tempest and the IFCF Team Up to Fight Cancer with a...