Self-contained breathing apparatus (SCBA) and the breathing air contained in its cylinders are critical equipment used in fighting fires. And, the quality of the air inside those bottles is equally important.

While many departments have fill stations in their firehouses, others carry mobile systems on rescues, trailers, air/light rigs, or other apparatus to provide quality air at a fire scene. And when on a rescue, breathing air systems often are also found supplying air-powered tools.

William Dickson, vice president of sales for breathing air products at BAUER Compressors Inc., says BAUER designs its breathing air systems to meet specific customer requirements. “Each department has its own unique needs,” Dickson says. “We have a BAUER staff person or a distributor with a BAUER factory person sit down with the fire department to find out exactly what they want and then design the system to fit their needs.” 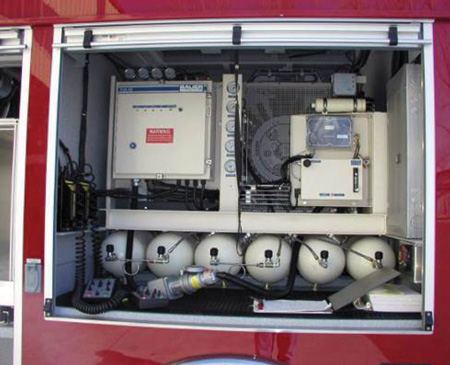 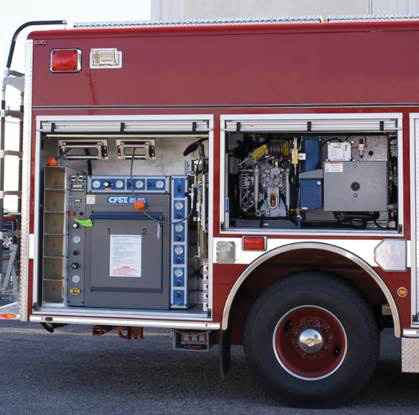 He says there are three basic components to a breathing air system: the compression component, the management component that directs air into the storage vessels, and the cascade and fill station system. “The size of all those components, the discharge capacity and pressure of the compressor, the number of storage cylinders, and the size of the fill station are all dictated by the department,” Dickson says.

If a department puts breathing air on a pumper, it typically is only a cascade system and fill station, Dickson points out, because there often is not room for anymore equipment. However, on rescues and air/light trucks, a generator, compressor, cascade system, and fill station usually are carried. Dickson adds that BAUER offers single-, two-, and three-position fill stations. “Typically, the compressor and storage system are located in an air-cooled transverse compartment over the rear wheels,” Dickson says, “while the fill station often is put in a side or rear compartment.”

Douglas Ballmann, vice president of sales at Breathing Air Systems, says his company typically puts compressors on trailers or larger vehicles like air/light trucks. “These are usually diesel-driven compressors, and because it makes sense to get the fastest turnaround on a scene, the compressors typically are either 13.3-cubic-feet-per-minute (cfm) or 25.2-cfm,” Ballmann says.

Breathing Air Systems also custom designs its systems around a customer’s needs, he adds, which usually is a cascade system and fill station when installed on a vehicle. “A standard cascade system might be four cascade cylinders, either 4,500 pounds per square inch (psi), 5,000 psi, or 6,000 psi mounted in the truck, a control panel, and a containment-style fill station for one, two, or three bottles and meeting National Fire Protection Association (NFPA) 1901, Standard for Automotive Fire Apparatus,” Ballmann says. 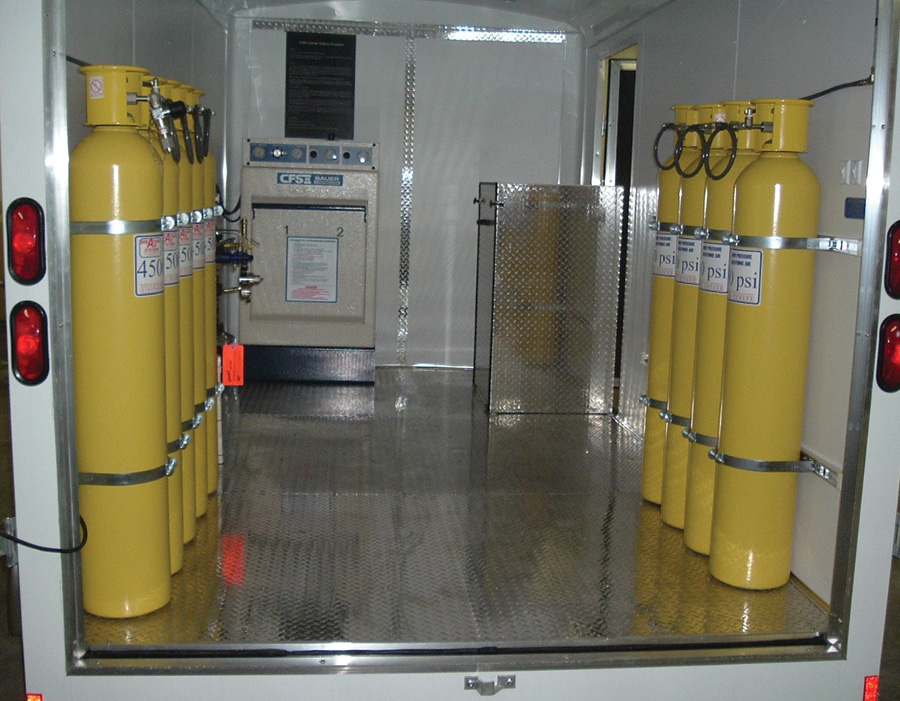 Pat Linn, salesman for Breathing Air Systems, says that a cascade system has to be at a higher pressure than the bottle being filled. If it isn’t, he notes, a booster pump can be added to the system. “A booster pump amplifies pressure in a storage cylinder to a usable pressure,” Linn says. “In addition to filling SCBA bottles, a cascade system can be used to power air tools, which requires an additional regulator to power down the psi to a usable air tool pressure. We’ve even run an umbilical line to an SCBA air mask for use in a decon station during a hazardous materials incident.”

Brad Harvey, senior application engineer for 3M Scott Fire & Safety, says the company makes the HushAir Connect 7500 compressor system with a 7,500-psi design and RFID sensing technology; the Liberty I and Liberty II compressors on trailers; and the Liberty Slip-In, a modular system designed for use in a mobile environment. The Liberty Slip-In includes a compressor, charge station, and optional storage system, Harvey says, so it can be configured with low- and high-pressure panels, low- and high-pressure regulators, cascade panels, and 3M Scott Fire & Safety’s Smart Fill Auto Cascade system. 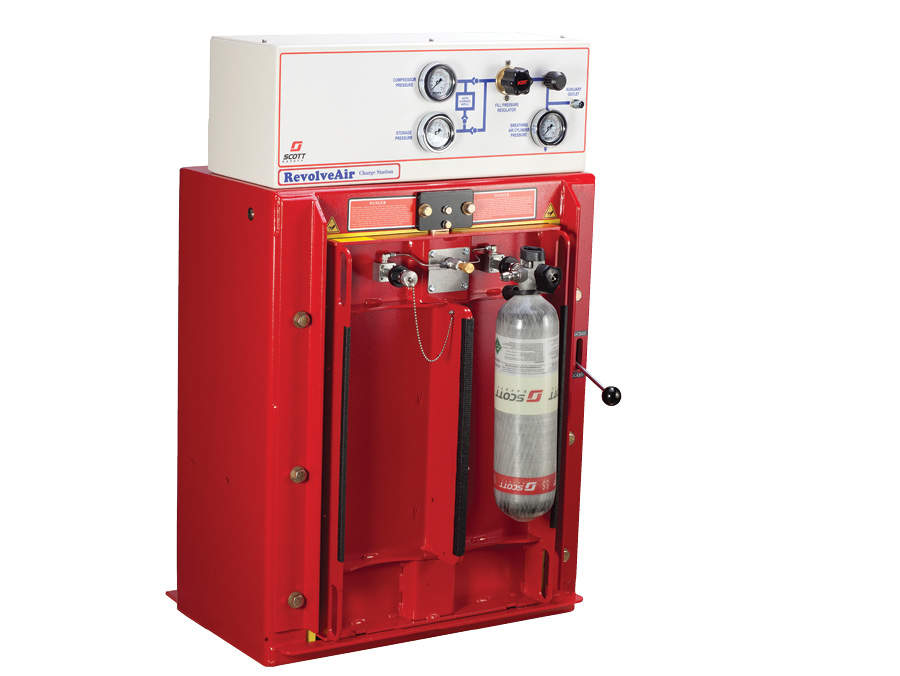 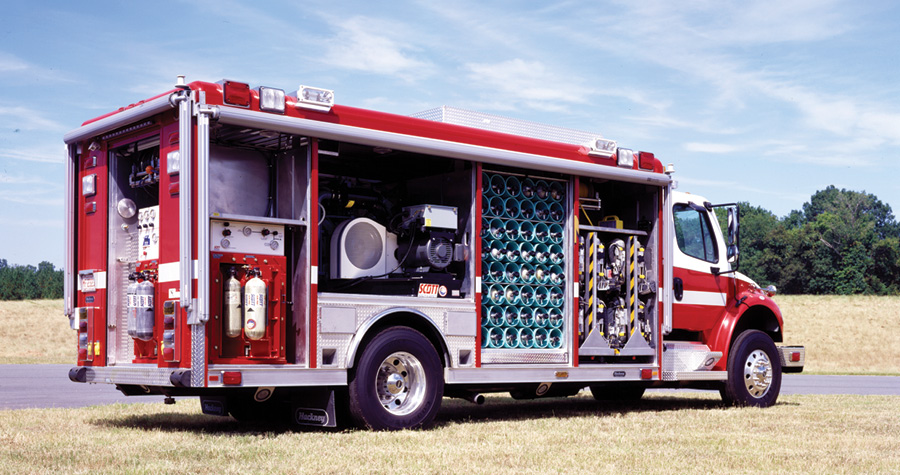 3M Scott Fire & Safety also makes the RevolveAir Charge Station, which Harvey calls “the fastest fill station in the market that provides maximum safety and performance while simultaneously charging two SCBA cylinders in the protective chamber, while two bottles are exchanged on the outside of the chamber. You pull a lever to rotate the door to the chamber and when you close the lever, the system begins filling the two cylinders inside while you hook up two more outside. The only time the system is not filling cylinders is when you are revolving the door.” 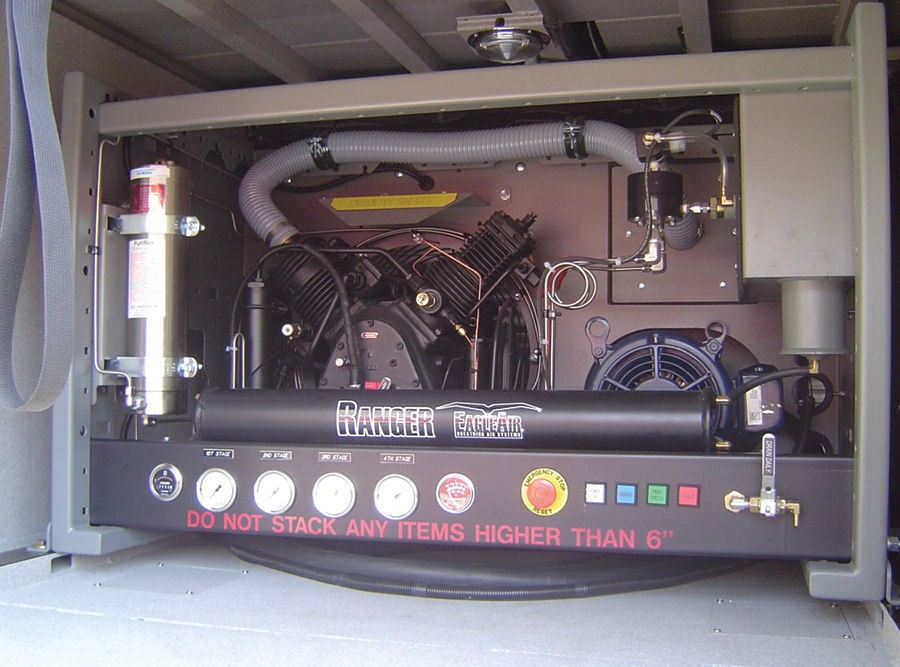 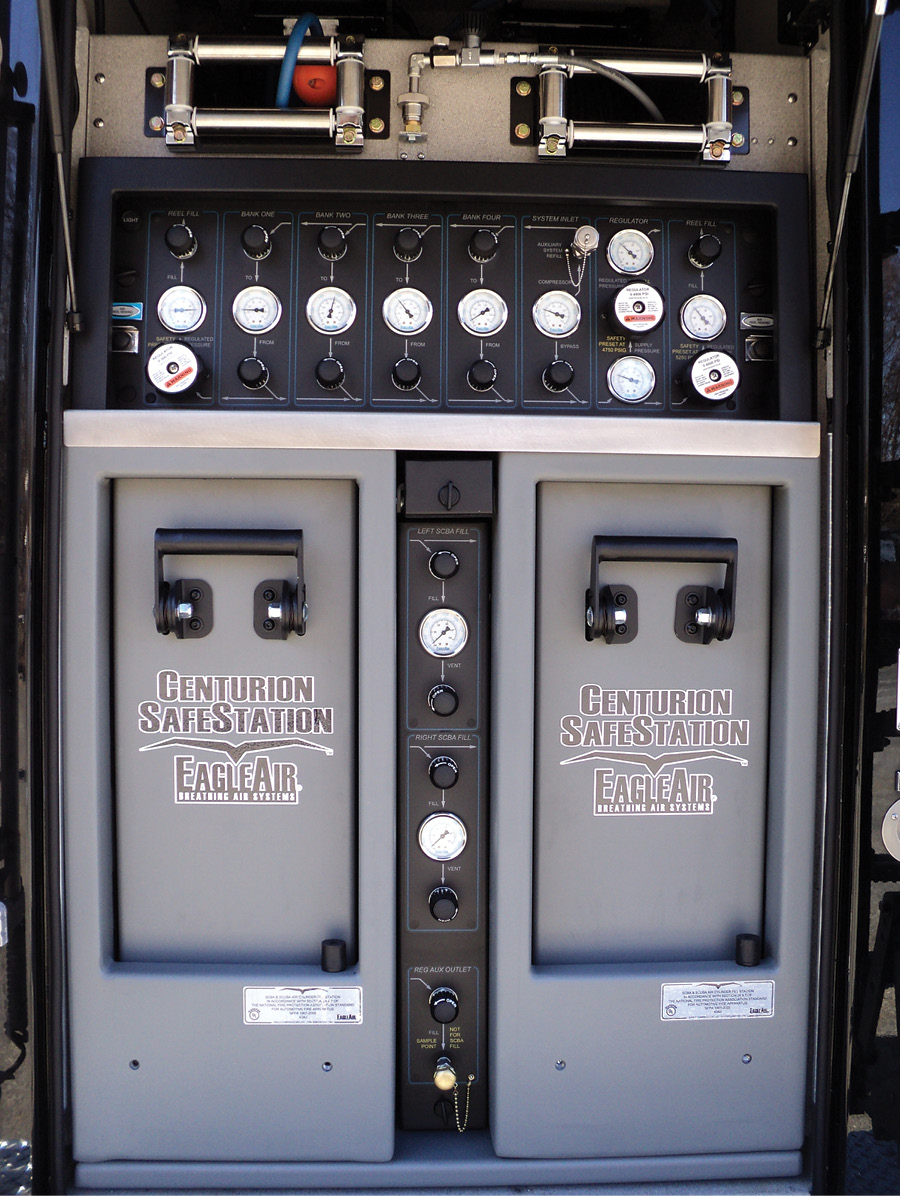 Dave Rutterman, sales manager for Eagle Air Breathing Air Systems, says his company offers Ranger air compressors in 9.5-, 14-, 20.7-, and 27-cfm models that can be configured for mobile use. “You need an onboard generator to power an air drive compressor,” Rutterman notes, “which then feeds the containment bottles on the vehicle. However, a lot of rescue trucks only have a cascade system and fill station on them and no compressor.”

Gary Williams, president of Stallion Air Inc., says his company offers the Percheron compressor, an open design for applications where space is at a premium and access doors would be unusable. “Percheron is suitable for fire trucks because of their limited space, and the open design gives more access to the unit when it needs to be maintained,” Williams points out. Additionally, Stallion Air makes one-, two-, and three-position mobile containment fill enclosures.

Williams notes that fire departments often don’t put compressors on their vehicles and opt for storage bottles, cascade systems, and fill stations. “There are some limitations to putting a compressor on a fire truck to fill breathing air systems,” he says. “If you’re in a contaminated zone on a fire scene like a fire at a chemical plant, if you’re too close, you would be filling air bottles with contaminated air. This could be an issue with a typical smoke-filled structure fire scene too. The benefit to a mobile cascade system is the ambient air around it doesn’t really matter because the air was put into the storage bottles elsewhere.”

Steve Potter, product engineer for North Shore Compressor & Machine Inc., says that when its Arctic Compressors are installed on apparatus, they usually are its open frame models of either 5,000 or 6,000 psi, which in most cases are electric versions being run by a generator on the apparatus. “But, it’s far more common to put a cascade system and fill station on the vehicle and then refill them from a compressor back at the fire station,” Potter points out. “There’s also the question of pulling air from the fire scene and putting it into the storage bottles. Compressors have sophisticated filters, but they can’t get everything.”

North Shore offers both 4,500- and 6,000-psi storage cylinders that can be mounted for mobile applications or statically in a station, as well as single- and two-position containment fill stations. “If the system is installed in a station, it’s usually an enclosed compressor and double fill station,” Potter says, “and on an apparatus is typically an open frame compressor with a single fill station.”