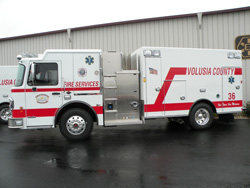 VAN WERT, OH – At FDIC 2012, Braun will be displaying its “Built for Life” ambulances in its main booth, as well as various chassis booths throughout the exhibitor areas.

The main Braun ambulance booth is #4731. There will be lots going on here throughout the show, as the ambulance manufacturer is celebrating their 40th Anniversary. Braun will be filming customer testimonials throughout the show and promoting their 40th Anniversary “Why I Love My Braun” photo contest. Entrants will be eligible to win a Motorola XOOM tablet and Braun Industries merchandise and apparel. #4731 booth visitors will also get the chance to tour three different ambulance units and receive a free Braun T-shirt.

One of the much-talked-about custom Patriot ambulance units for Volusia County Fire Rescue will be on display here. Delivered by Ten-8 Fire Equipment, this model is an all-in-one ambulance, rescue vehicle, and fire truck. It features a 2011 Patriot ambulance module, 2011 Spartan MetroStar chassis, and a Waterous CAFSystem™ (compressed air foam system).

The new EZ Door Forward layout will be unveiled at FDIC 2012 on a Chief XL Type III ambulance. The EZ Door Forward is a new configuration and placement of Braun ambulance’s well-known EZ Glide Sliding Door. The sliding door has been repositioned to a forward location on the module to allow for more interior cabinet space and customization. This unit will be coming out of production and heading straight to the show.

Booth #4731 will also feature a Super Chief Type I ambulance on an International DuraStar chassis. This is a customer unit being built for West Licking Joint Fire District. The ambulance features a 170″ module with 73″ of headroom. It also has a Stromberg electric step, aluminum cabinets, Meganite countertops, a Norcold refrigerator, tools boards in the extended cab, a cabinet at the head of the squad bench, and Whelen LED light bars. Like the EZ Door Forward, this unit will finish production and drive directly to FDIC 2012 for a first-look.

At GM’s booth (#3561), FDIC visitors will be able to tour the newest ambulance model from Braun Industries, the Phil Braun Signature Series on a 2012 Chevy G-3500. This 150″ model has all of the core features Braun is known for in a production model, with a very economical price tag. It is a must-see for any department seeking a new, quality built ambulance at an affordable price.

The Ram Booth, formerly known as Dodge and located at # 8630, will have a Braun Chief XL ambulance on display. Built on a RAM 4500 chassis, the unit features a Whelen LED “M” series lighting package, Vanner Inverter, aluminum cabinets, Tri-Star 5-Point Harness CPR Seat, Norcold refrigerator, Hoseline FT-454 Heat/AC system, gear storage in the rear exterior compartments, and more. This is a customer unit being built for Warrenville Fire Protection District and will be seen first at FDIC 2012.

Visitors should also remember to visit Ford’s booth #4531. Here, Braun will be displaying their new Safety Interior Layout in a Chief XL ambulance on a Ford F-450 4 x 2 chassis. As ambulance design shifts to keep EMTs seated and belted during patient care and transport, Braun’s Safety Interior Layout meets the needs of keeping the crew safe while allowing for easy access to equipment and supplies to aid in patient care. This layout will be shown on a customer unit for Sharonville Fire Department, which will leave the production line and head straight to FDIC.