(Boynton Beach, Florida—September 13, 2011) The call was toned out as “3 officers down” and Boynton Beach Firefighters responded not knowing if the officers had been shot or taken down some other way.

At approximately 0830 hours on September 13th, police had been called to a home invasion robbery in Boynton Beach. A responding officer attempted to pull over the suspects who, instead, fled in their blue truck only to crash into a house, just blocks from the alleged crime scene. The three suspects jumped out of the vehicle and fled on foot, the pursuing officers called for backup. 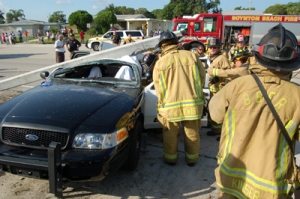 At that time, day-shift PD personnel were just breaking up the morning roll call and three officers got into the lone cruiser to assist in the manhunt.

En route to the area, the driver of the PD unit somehow lost control of the vehicle skidding several yards before crashing through a cement light pole which then fell on the vehicle trapping and injuring the three officers inside.

Boynton Beach firefighters from at least three stations responded to the scene, including the department’s Special Operations Unit.

Upon arrival, crews had to shore up the cement light pole that crushed the car leaving all three patients in various positions inside the wreckage.

A local tow truck was called in to lift the pole off of the car so that all three officers could eventually be freed and transported by ground to Delray Medical Center’s Trauma Unit.

The full extrication of all three patients took Special Ops more than an hour given the intricate challenges created by the crash.

Thankfully, all are expected to survive. Captain Dean Kinser says of the scene, “This one was inches, no, centimeters,” gesturing with his fingers close together.

He said, “Another couple of inches and this would be a very different outcome. They [the officers] are lucky today.”  The pictures tell that part of the story.