The Platte Canyon (CO) Fire Protection District covers 271 square miles of area in Park and Jefferson Counties, much of it without a hydrant system, although sources of water are relatively available.

“We have two fire stations in Bailey, a third station in Grant, and a fourth in Harris Park,” Burgett says. “While we have a tremendous amount of water in and around our district, it is not from tapped sources. The north fork of the South Platte river runs through our fire district, so we have 11 dry hydrants and we have only one housing subdivision in our district that has pressurized hydrants. For us to have a successful outcome on a fire, we usually have to deal with it with the water we show up with.” 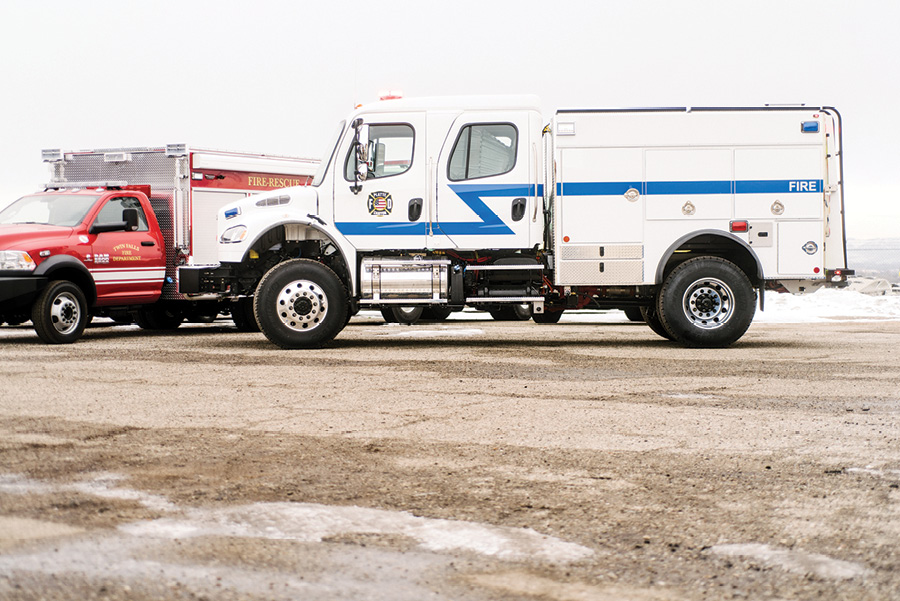 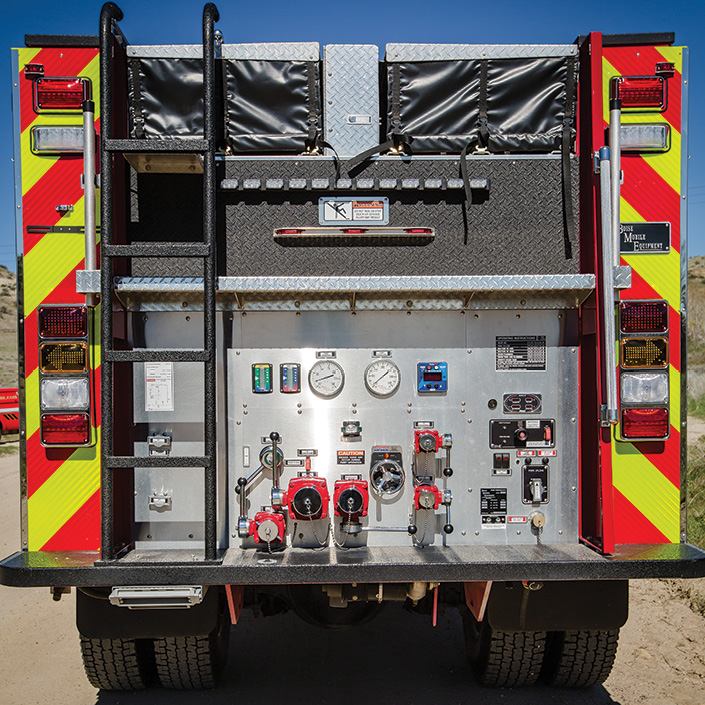 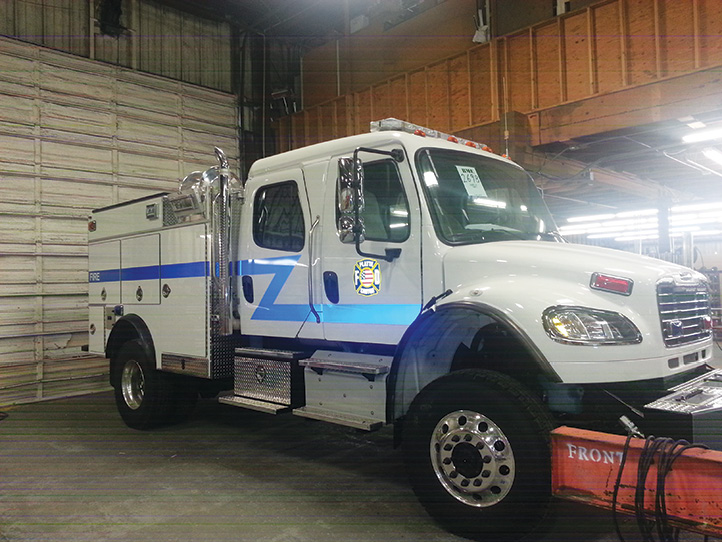 3 The rig is powered by a Cummins 350-hp ISL9 engine and an Allison 3000 EVS automatic transmission.

Burgett points out that one of the chief considerations the Platte Canyon truck committee had when it set out to spec a new Type 3 engine was that it have as large a water tank as could be carried along with plenty of usable compartment space. “The specs the committee developed are based on the CAL FIRE Model 34 Type 3 specs,” Burgett says. “And while we wanted to carry more water than the usual 500 gallons found on typical Type 3 engines, we didn’t want it to impact the compartment space on the vehicle. We use our Type 3 both in and out of our fire district because we respond to fire incidents anywhere in the country.”

He notes that the truck committee laid out the Type 3 so that turnout gear and equipment were easily accessible to firefighters when they were ready to go to work. “We wanted to set up our firefighters for success,” he says, so “the cab and compartments in the body had to be configured appropriately.”

Burgett says that Platte Canyon received bids on the Type 3 from three manufacturers. BME was awarded the bid at a cost of $300,000. The resulting vehicle is built on a Freightliner M2-106 4×4 chassis with a four-door cab and seating for four firefighters.

The Type 3’s body is steel, says Larry Segreto, BME vice president, and the compartment doors are aluminum. The vehicle has an overall height of 9 feet 11 inches, he says, an overall length of 26 feet 8 inches, and a wheelbase of 163 inches. “Because the engine has a rear pump panel,” Segreto notes, “were able to trim down the overall length on the vehicle.”

The rig is powered by a Cummins 350-horsepower (hp) ISL9 engine and an Allison 3000 EVS automatic transmission, Segreto says, and carries a Darley 500 gallon-per-minute (gpm) JMP500 two-stage pump, a 750-gallon water tank, a 25-gallon foam tank, and a FoamPro 1601 foam system. “The most unusual feature of this Type 3 is its 750-gallon water tank,” Segreto observes. “We would have given them a larger water tank, but it would have cut into the compartment space that they needed on the vehicle.”

Burgett says that another reason the truck committee spec’d a Type 3 engine was because it is a much more maneuverable vehicle than a Type 1 pumper. “We have areas in our district where subdivisions have been built out into the forest as well as plenty of summer-use cabins in the forest,” he points out. “Also, our district has eight U.S. Forest Service (USFS) campgrounds as well as dispersed camping everywhere, so the ability to directly regulate camping and make sure campfires are adequately extinguished is difficult. Having a maneuverable vehicle that was usable in the wildland urban interface as well as on USFS four-wheel-drive roads was very important to us.”

Burgett notes that Platte Canyon has a 10-firefighter wildland-use module, a subset of a 20-firefighter wildland crew, that performs wildland mitigation in the district. “Pike County is doing a lot of mitigation in the forest, and we have a very active fire-adapted community in Bailey,” he says. “Those people and our wildland-use module will head out and patrol dispersed camping areas to be sure any fires are adequately extinguished. The dispersed camping can be by recreational vehicle, all-terrain vehicle, or mountain bike, and there is no camp host at a dispersed campsite like there is at USFS campgrounds.” 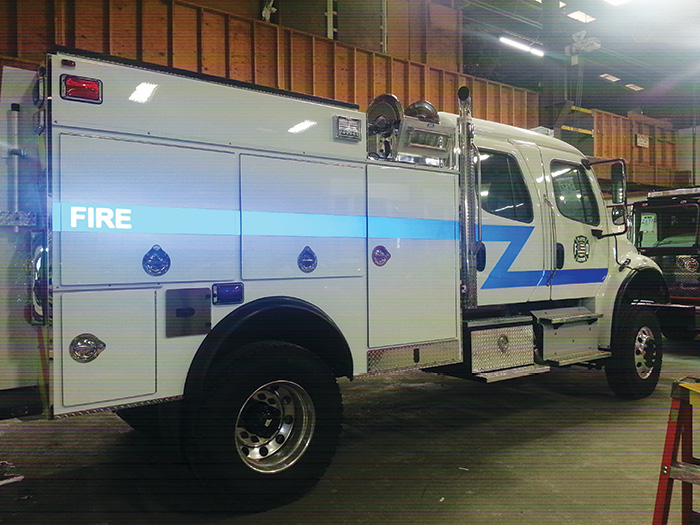 5 The apparatus’s body is steel, while its doors are aluminum. 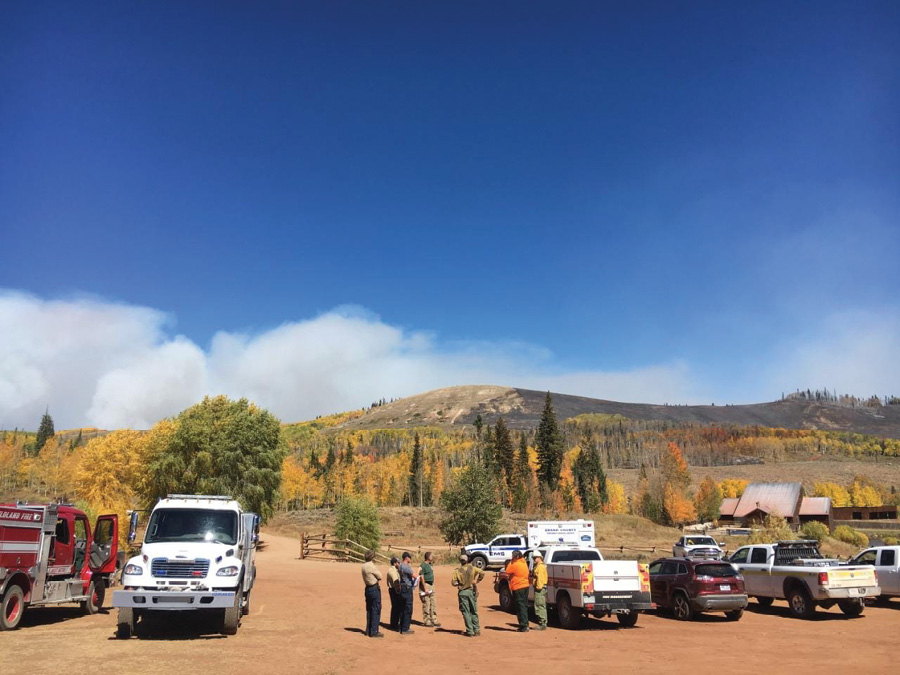 6 The new truck is shown deployed at a wildland fire in Colorado.

The Type 3 also carries 10 hand tools useful in fighting wildland fires, Burgett says. These include Pulaskis, McClouds (a rake/scraping tool used to anchor the flank of a wildland fire), combi tools (shovel/pick combo), and a Rhino (hoe). “There also are mechanical tools in the compartments,” he says, “including a Stihl 44 chainsaw with different length bars, two drip torches, and other mechanical tools. The truck committee was diligent in configuring the truck so the cabinetry meets the needs of the firefighters working off of the rig. That was a very big focus, and it turned out to be very workable for the firefighters.”

Creature comforts, of a sort, were also built into the Type 3. “Because the engine is often on the road traveling to another area of the state or even another state, we did some simple upgrades in the cab like arm rests on the seats, seats that recline 45 degrees, and electrical outlets and USB ports,” Burnett says. “We’re so pleased with this Type 3 that we are considering building another one with BME next year and may even add [a compressed-air foam system] to it.”

Quick-Attack Truck Handles Brush, Vehicle, and Other Fires and Is Backup...