Considering a 1,000-foot change in elevation from its main station to outlying areas of its protection district, the chief officers of Blowing Rock (NC) Fire & Rescue gave long and careful consideration to the type of rescue truck they were going to purchase. The vehicle had to have as short a wheelbase as possible yet still carry all of the necessary equipment the state of North Carolina specified. The new rig also had to be able to negotiate narrow, winding mountain roads that often had steep inclines. 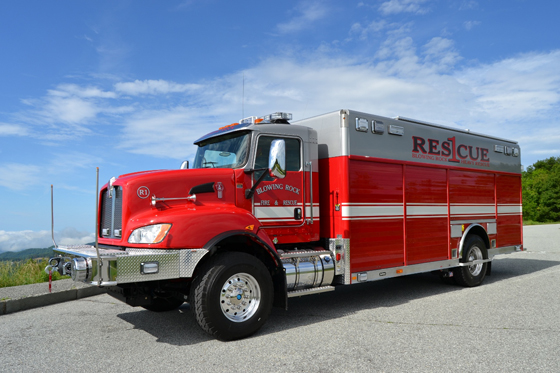 CLICK HERE FOR A PHOTO GALLERY FOR THIS TRUCK

“We have special needs of access and maneuverability in our district that dictate the size and type of some of the fire vehicles we order,” says Kent Graham, Blowing Rock’s chief. “In the mountains, there are narrow and difficult places to get to where horsepower in a vehicle is needed going up the hills and extra braking power is needed coming down.”

Graham is in charge of a department staffed by nine paid full-time and four part-time firefighters, along with 40 volunteer firefighters. They operate out of two stations and cover 54 square miles including the town of Blowing Rock, rural communities, and the wilderness areas of Watauga and Caldwell counties. Area population is 1,500 citizens, which swells to 10,000 on summer weekends.

Blowing Rock’s district runs along the crown of the Blue Ridge Mountains, Graham points out, along the rim of Johns River Gorge. “Our main station is at about 3,500 feet elevation,” he says. “The area we cover goes up and down from there—about 700 feet in lower elevation and about 500 feet in higher elevation. We have a mixture of paved and unpaved access roads, some of which are gravel and very narrow with a lot of switchbacks and places where a tight turning radius is needed.”

Graham doesn’t believe in formal committees, citing the old adage that “a camel is actually a horse designed by a committee.” So, he tasked himself, deputy chief Matt McGuire, and a couple of key firefighters to work directly with a factory representative from VT Hackney to design a rescue truck that fit the department’s needs and budget.

The resulting vehicle, says Ed Smith, director of Hackney’s emergency vehicles group, is a heavy rescue truck built on a Kenworth 470 series with 40,000-pound gross vehicle weight rating (GVWR) chassis and two-person cab, powered by a 400-horsepower Cummins ISL9 and an Allison 3000 EVS automatic transmission. Purchase price was $383,000. “It’s a walk-around rescue on a single rear axle with an overall length of 33 feet, overall height of 10 feet, six inches, and wheelbase of 224 inches,” Smith says. “The challenge was to get all the equipment on board within the height and length restrictions.”

Smith points out that the Blowing Rock heavy rescue carries a 35-kilowatt Onan PTO generator with a 150-amp service panel, a CL 609 Command light tower with six 900-watt heads, four FRC Spectra LED scene lights (two on each side of the body), two FRC Magnifier LED tripod lights at the back, and two Hannay electric cord reels, each carrying 200 feet of 10/4 electric cord allowing the tripod lights to be removed from the vehicle and connected to the cords away from the truck.

Graham praises Hackney for its use of the drop pinch frame that allows a huge rear compartment where the department’s hydraulic rescue tools are stored. “The drop pinch frame approach worked great for us to bring the center of gravity of the truck down and create a lot of usable space at the rear of the truck,” he says. 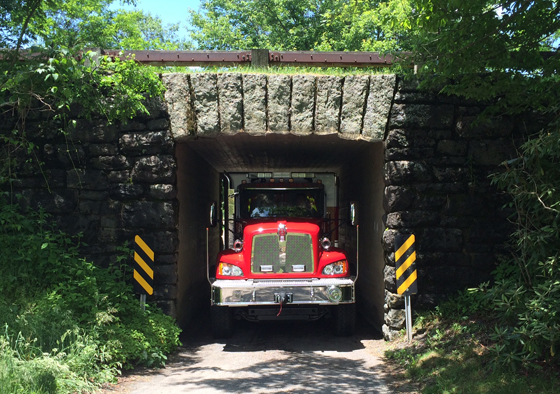 CLICK HERE FOR A PHOTO GALLERY FOR THIS TRUCK

McGuire points out that the rescue truck’s extended front bumper carries a fixed 16,500-pound Warn winch, and three receivers are positioned at the sides and rear for use with a 9,000-pound Warn portable winch. The truck also has tie-off points at all four corners of the roof. “We also have a rope winch on the truck, and using the tie-off points on the top, we can rig for rescue using a Stokes basket or set up for a cable winch rescue,” McGuire says.

The top of the rescue truck is set up with two coffin compartments on the driver’s side and carries a 24-foot, two-section extension ladder and a 14 foot roof ladder on the officer’s side that are accessible from a roller assembly at the rear of the truck.

The rescue needed to allow for a steep angle of approach, Smith notes, so Hackney installed oversized 385/65R22.5 front tires to help the vehicle sit up higher and deal with the mountain terrain better.

Other equipment on the apapratus includes a four-bottle 6,000-pound Cascade air station, four self contained breathing apparatus (SCBA) in frames on a slide-out tray in a driver’s side compartment, 10 spare air bottles, and an absorbent dispenser with a sealed lid to keep out moisture and prevent clumping.