Like most towns on Long Island, it is served by a volunteer contingent of firefighters. The fire district was in the process of obtaining a bond issue for enlarging its fire headquarters and the subsequent large purchase of fire apparatus to replace four aging units.

According to Chief Ed Kunz, “In the past two years, we had to begin to think to replace four pieces of aging apparatus. One of our ladders was a 1983, and we also had 1982, 1991, and 1997 pumpers that were in need of replacement. In the process, we looked at four manufacturers. Our apparatus replacement committee comprised the chief’s office, the district manager, and representatives from each company that was to have a vehicle replaced.” 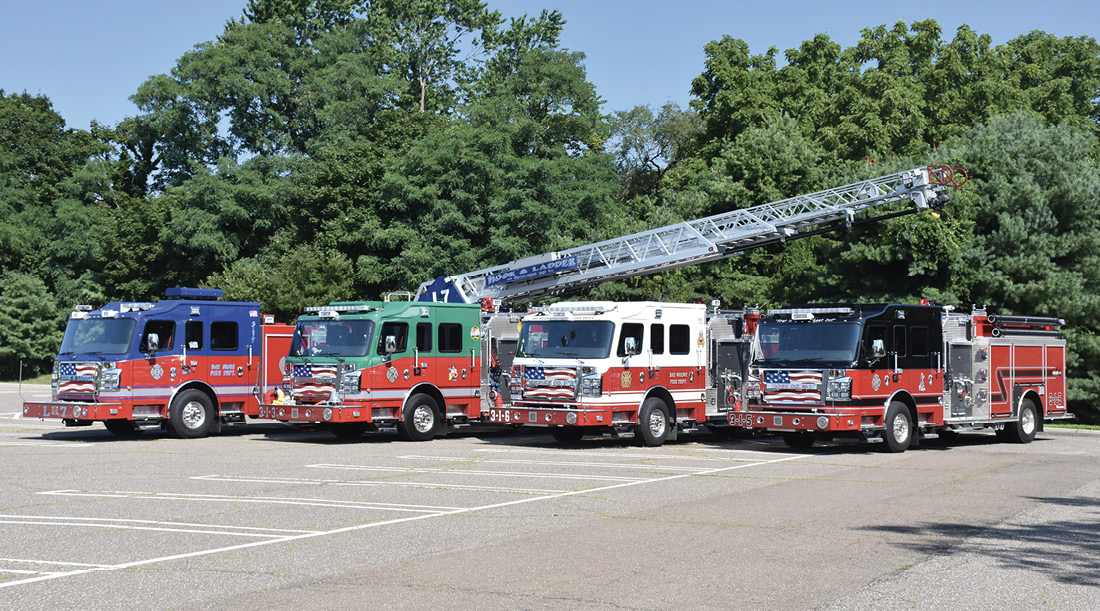 1 Lineup of all three: Rosenbauer Commander engines and Rosenbauer Viper 109-foot rear-mount ladder. Each company chose a different color for the top of the cab. (Photos by author.)

The department’s fire district gave it $2 million to spend on the purchase. “We chose to go with the NJPA purchasing program, which made it easier for us not having to go out to bid,” says Bill Stenger, fire district manager. “And Rosenbauer, which we eventually chose for the build, was in that program.” He adds, “We also wanted to go back to the basics as far as operation of the vehicles. We didn’t want any electronic valves or flow meters. We wanted to go old school. Also, we designed each engine to be identical as far as compartments and operation were concerned. If you operated and responded with one engine, you could operate the other two as well. They all carry the same tools in the same compartments. All the hoselays are also identical, for the most part, with location and the amount of hose carried, with one exception.”

The department also wanted larger compartments and went to a single-stage pump for the engines, something that took a lot of convincing for current drivers. “They were brought up on two-stage pumps,” says Stenger. “But with higher horsepower engines and larger pumps, we didn’t think it would be much of a problem.” 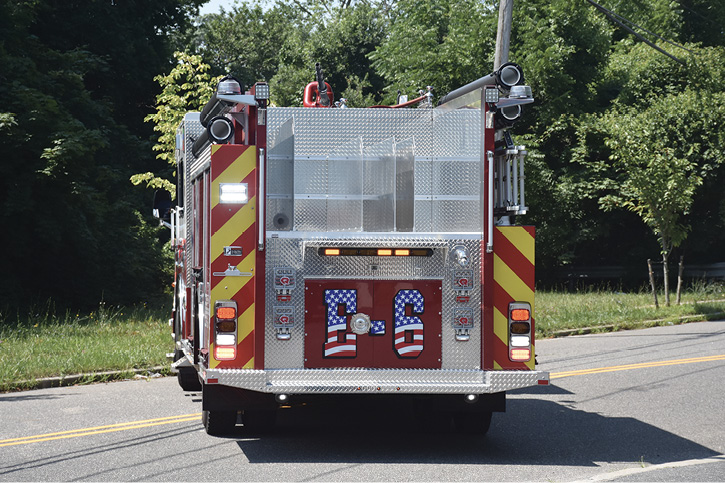 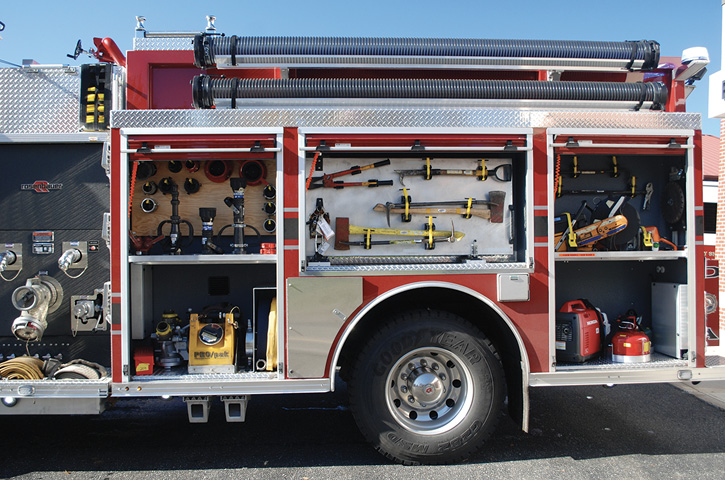 Stenger says that the department eventually chose Rosenbauer for the apparatus purchase. “They gave us a lot for our money,” he says. “Dealing with them was great. They have a local service center, and the local dealer, Eagle Fire Equipment, was a pleasure to deal with.”

The committee worked on the specs at the department’s headquarters and then traveled to the factory for two visits, states Stenger. “In hindsight, we were probably better off holding the preconference build at the factory to actually see some of the ideas we had on other vehicles that were already being built,” he says. “The visits we did were one for cab and chassis inspections and a second visit for final inspection. We also gained some new ideas for the build when we went out to the factory for the visits that we incorporated.”

When the BSFD received the apparatus, it had its in-house maintenance personnel mount all of the rigs’ tools.

The rear of the pumpers has 250 feet of preconnected 2½ inch. There is also 150 feet of one-inch booster line and portable generators on each engine. The engines also carry four five-gallon pails of foam. The foam tanks are kept dry until needed for a foam operation. They also have preconnected deck guns and four 10-foot sleeves of hard suction hose and floats for the hard suction hose. Self-contained breathing apparatus spare cylinders are carried over the wheel wells. Pump panel compartments have cones, flares, and fire line tape. The walkways between the top-mount pump panels and cabs carry Little Giant ladders. 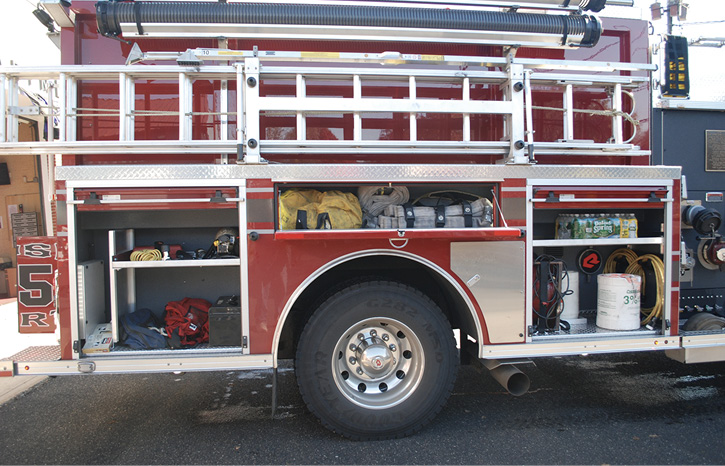 5 The Rosenbauer Viper 109-foot rear-mount ladder truck features high side compartments on both sides of vehicle. 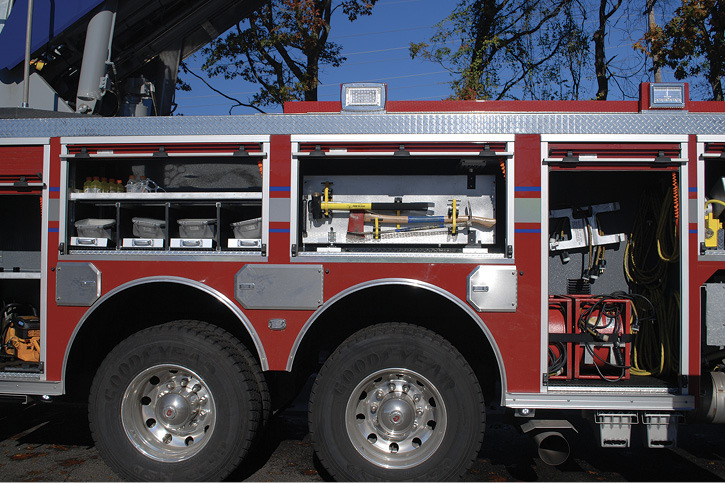 The truck also carries a full complement of ground ladders. The truck has a short jacking profile and a joystick control for easy and quick operation for the aerial itself.

The BSFD designed three simple pumpers with an old school touch as well as an aerial that met its needs for its varied response district. It also designed the pumpers to carry identical tools and hose for easier operation and training of its members.

When spending a great deal of money on an apparatus purchase, you must make sure you are receiving the “best bang for the buck,” as they say. It seems the BSFD did just that. While all of the apparatus are custom builds, the BSFD designed the compartments to hold the tools it operates with space for future use. It planned hosebeds and the hose carried for its response district, which includes a larger waterfront area, hence the 10-foot sleeves of hard suction hose carried on all of the engines for possible drafting scenarios.

Writing the specs and involving the local salesperson and factory engineers is a plus for everyone. This ensures that you get what you want as the end result. Service after the sale is also paramount. Having a local service center for warranty service and repairs is also something you should be concerned about. In this purchase, the BSFD was fortunate to have both, thanks to its proactive thinking and planning. Make sure you know what you want before you place an order, and proper planning is essential.