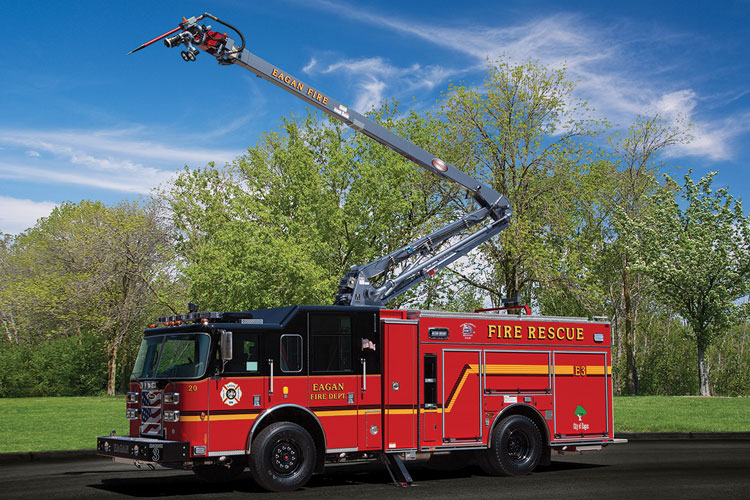 Snozzle, Sky-Boom, T-Rex, ACP 55, Stinger, Roadrunner, Snorkel, TeleSqurt, Squrt, and Bronto Skylift are some of the boom and articulating boom configurations that are finding their way into fire departments around the country.

Departments using such apparatus see the rigs as valuable in operating up and over obstacles and buildings, in below-grade operations, and for getting into tight places.

Tim Smits, senior manager of national sales and product support for Pierce Manufacturing Inc., says the Snozzle articulating boom comes in 50- and 65-foot lengths and is popular on both municipal fire apparatus as well as on aircraft rescue and firefighting (ARFF) rigs made by Oshkosh. “Both Snozzle lengths feature a 1,500-gallon-per-minute (gpm) waterway and have a piercing nozzle option that flows 250 gpm with a 40-foot spray pattern,” Smits says.

Smits points out that when the Snozzle is mounted on a traditional pumper body, it’s mounted midship, which means the rear compartment on the pumper is unrestricted, unlike a rear-mounted unit. The Snozzle consists of two boom arms and one telescoping boom that can extend 15 feet, and it also can operate below grade. Both lengths can be installed on a single-rear-axle vehicle and are supported by two midship, A-frame-style stabilizers that stick out 12 inches on each side.

Pierce also offers the Sky-Boom, a two section, rear-mounted boom in 55- and 61-foot lengths that mounts on a single-rear-axle vehicle. The Sky-Boom uses a single set of A-frame-style stabilizers and can flow 1,000 gpm.

Rosenbauer makes two articulating boom products and one elevated boom product, says Dave Reichman, national sales manager. “The T-Rex has a 115-foot vertical reach and 93-foot horizontal reach and is composed of three sections with an 18-foot-long articulating jib boom,” Reichman says. “It has a lot of advantages over a straight stick or platform because the articulation allows the T-Rex to get up and over a parapet without the need of a parapet ladder, up and over other obstacles, and below grade easily for river or gorge rescues or operations off an elevated highway bridge.”

Reichman says the T-Rex has two center and two rear H-style jacks that use “sensors that read real-time pressure on each jack, know how far each jack is extended, and determine where the aerial can or can’t go based on the jack information. The sensors will not allow an unsafe operation.”

Brandon Whittaker, Rosenbauer aerial specialist, notes that the T-Rex platform can rotate 48 degrees to the left and right and has a smaller folding platform at the front that makes it easier to get victims and firefighters on and off the platform. “There’s also a rappelling arm in the basket and locks on the floor to hold a victim in a Stokes basket inside the platform instead of on top of the rails,” Whittaker says.

“The platform can carry 1,400 pounds without a monitor and lights or 1,250 pounds with that equipment. As people enter the platform, the CAN Bus technology weighs each person to determine the maximum load,” he adds. “Also, there is impact protection around and under the platform, so if the operator gets too close to an object he can’t see, the Smart Aerial controls tell him where the object is, and he has to hold an override button to continue forward.”

Reichman says that Rosenbauer recently introduced its ACP 55 articulating Cobra platform that uses Smart Aerial features such as soft touch controls, envelope control, auto bedding, programmable cab and body controls, and a single joystick control. “The 55-foot length carries a 1,000-gpm monitor and waterway and has a 750-pound dry tip load and 500 pounds wet,” he says. “The system is all steel construction, can stand up to 50-mile-per-hour (mph) winds and ¼ inch of ice, and uses four A-style jacks with a jack spread of 11 feet 9 inches.”

Rosenbauer also makes the Stinger high reach extendable turret (HRET) with a 55-foot articulating boom and a piercing nozzle, mostly used on Panther ARFF units but also on some municipal pumpers, Reichman says. It also makes the Roadrunner straight boom in 55- and 68-foot lengths, typically carrying a 1,000-gpm monitor with a ladder section over the top. The boom uses two pairs of A-frame stabilizers at the rear and has a 500-pound dry tip load and 250 pounds wet.

Dave Rider, director of global product management for Smeal Fire Apparatus, says Smeal’s subsidiary, Ladder Tower Company (LTC), makes the Snorkel, TeleSqurt, and Squrt lines of products. “The Snorkel is an articulating boom platform that’s available in a 55-foot model that is stabilized by four A-style outriggers,” Rider says. Until Smeal took over the company, the last Snorkel built was about 25 years ago, Rider points out, so LTC had to redraw the original blueprints with computer-aided design software, convert them into 3D, engineer a unit, build a model, and get it tested. “We started with the 55-footer and are looking at converting the blueprints and reengineering the prior 85-foot model,” he says.

LTC’s TeleSqurt is available in 50- and 65-foot versions. The 50-footer is typically mounted on a single-rear-axle pumper, like two recently built for the Syracuse (NY) Fire Department, Rider says, on Spartan Gladiator chassis with 1,500-gpm pumps and 500-gallon water tanks. The 50-foot version uses two A-style outriggers at the rear, while the 65-foot model has four A-style outriggers – two at the rear and two midship. TeleSqurt boom ladders have a 1,000-gpm master stream with a 500-pound dry tip rating and 250 pounds wet.

The Squrt is a 54-foot boom that uses the same controls, torque box, and lower assemblies as the TeleSqurt and Snorkel models. “We redesigned it for commonality of manufacturing and parts for the end user,” Rider says. “After Smeal took over LTC, we also upgraded to electric-over-hydraulic controls using the CAN Bus system.”

Tom Goyer, director of North American sales for Bronto Skylift, says the manufacture of its units is done in Finland and shipped to E-ONE where the devices are mated to chassis and bodies, then finished into completed units. “We offer models in 100-, 114-, 116-, and 134-foot lengths that meet the National Fire Protection Association chassis configuration standard,” Goyer says. “The telescoping main boom has three sections for the 100-, 114-, and 116-footers, while the 134-footer has a four-section boom. Each model has a secondary 22-foot-long jib boom with a platform at its tip. A ladder runs alongside the boom.”

Goyer stresses the benefits of an articulating boom apparatus as being able to provide access at a fire or rescue scene. “The access is what sells,” he says, “like being able to go over wires or a parapet or the peaked roof of an apartment building and hitting the back side. Also, there are advantages to being able to easily go below grade.”

The Bronto Skylift 116-footer has a 50-mph wind rating, while the three other models have a 31-mph wind rating. The 100-, 114-, and 134-footers use an auto jacking system where the operator pushes one button to get the jacks out and a second button to level the vehicle, Goyer says. “The 116-footer has variable jacking where the operator gets the jacks out as far as possible and the onboard computer shows him how far he can reach out in four quadrants. All models use four H-style jacks with a maximum jack spread of 19 feet 8 inches.”

Goyer says the tallest Bronto Skylifts sold in North America include rigs of 174 feet in Coral Gables, Florida; 173 feet in upstate New York; and 164 feet in Montreal and Calgary, Canada.