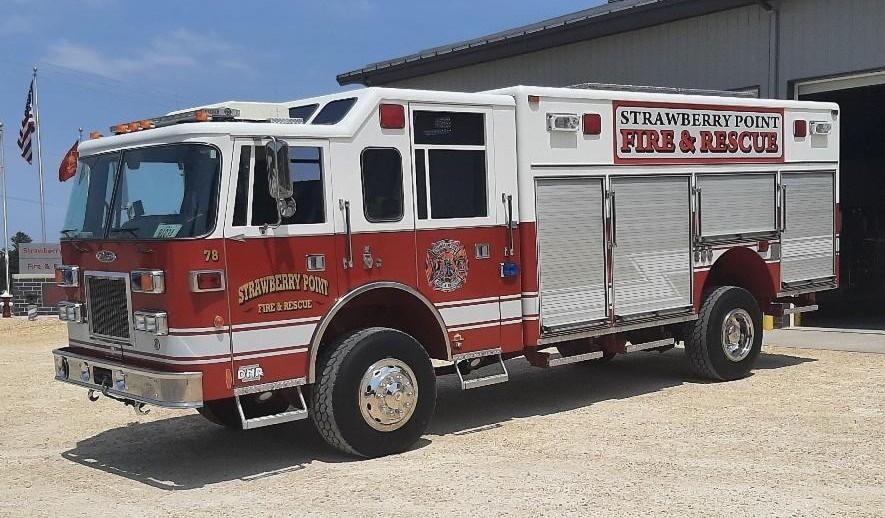 More than 700 miles separate Arnold (TN) Air Force Base and the town of Strawberry Point (IA).

On any given weekday, the workforce at Arnold AFB exceeds the population of the small Midwestern municipality. Arnold, the headquarters of Arnold Engineering Development Complex, is home to dozens of wind tunnels, tests cells, chambers, and ranges that have contributed to the development of numerous aircraft, engines, missiles, satellites, and space systems. The Iowa town is home to “the world’s largest strawberry” – a 15-foot-tall fiberglass statue located in front of Strawberry Point City Hall.

Still, distance and differences didn’t prevent emergency responders at Arnold and in Strawberry Point from connecting over the summer, their association stemming from their common goal of protecting lives and property.

When all was said and done, members of the Strawberry Point Firefighters Association left middle TN with valuable equipment, once used by emergency crews at Arnold, to bolster the lifesaving efforts of their hometown fire department.

The fire truck acquired by the Strawberry Point firefighters and repurposed for use by Strawberry Point Fire and Rescue was past its useful life for Arnold AFB Fire and Emergency Services, or FES. Typically, when this type of government equipment reaches that point, the assets are dispositioned through the Defense Logistics Agency.

Due to issues related to the ongoing COVID-19 pandemic, the DLA had amassed a backlog in dispositioning such assets, meaning it would take longer than normal for Arnold to offload the truck.

However, personnel at Arnold found an alternate means for disposition. It could be accomplished instead through the General Services Administration. The GSA creates an availability list of excess assets, allowing organizations outside of the federal government to apply for the assets.

Strawberry Point Fire and Rescue requested the truck through the GSA. The request was granted, and in May, Gregg Howard, property administrator with AEDC contracting, signed the paperwork that transferred the truck to Strawberry Point. To save AEDC money on shipping costs, the truck remained at Arnold until firefighters from Strawberry Point could make the trip down to retrieve it.

Arnold FES Chief Daryle Lopes said his department is “thrilled” that the truck was transferred to a department that needed to expand its fleet to better protect those around its base of operations.

“It’s a great thing for us to know the truck will be getting a good home and will serve a good community,” he said.

Lopes added that the truck has been well-cared for and will serve Strawberry Point Fire and Rescue well during its extended service life.

“That’s going to be a valuable asset to them,” he said.

“Getting a truck like this for our Fire Department is a huge asset to our rural community,” Zitelman wrote.

Strawberry Point Fire and Rescue, which is made up of a little more than two dozen volunteers, responds to calls within a nearly-80-square-mile community, including the town Strawberry Point, and parts of a nearby 2,000-acre state park.

The department is also called upon to assist nearby communities for vehicle collision rescues due to it carrying the extrication device commonly known as the “Jaws of Life.” With the additional truck received from Arnold, Zitelman wrote the department will now have two trucks that can carry the Jaws of Life and other rescue gear, allowing Strawberry Point Fire and Rescue to better serve the nearly 1,200 residents of Strawberry Point and those in surrounding areas.

“We were thrilled when we received word that we acquired this truck and want to say thanks for having a program that allows small rural fire departments to improve their fire apparatus to help serve their community even better,” Zitelman wrote.