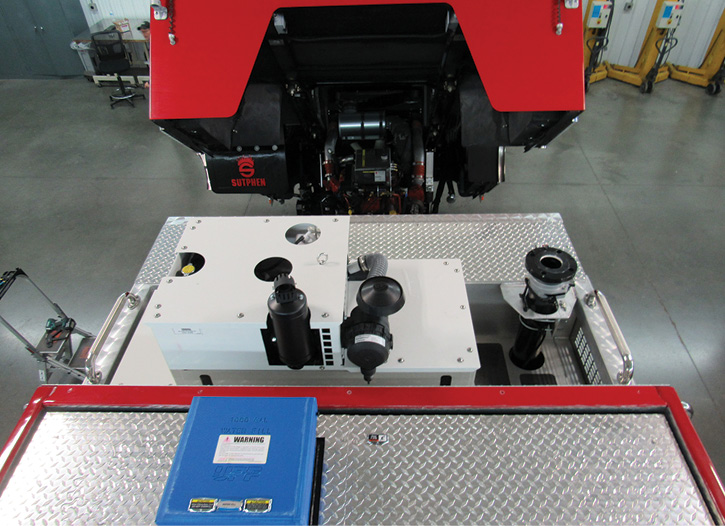 Auxiliary power units (APUs) are getting more and more use on board fire apparatus and ambulance units, with proponents saying the reduced run time and wear and tear on the main engine mean greater savings in terms of fuel, maintenance, cost per run, and return on investment in the APU.

The types of APUs being installed on fire and ambulance rigs are of two main types, says Dave Reichman, national sales manager for Rosenbauer: a diesel-powered unit and a battery-powered version. “Rosenbauer brought its Green Star technology to the fire industry 10 years ago and has supplied a large number of APUs on fire apparatus,” Reichman says. “Our diesel version uses a Kubota diesel engine to drive a generator that is programmed with a Rosenbauer-designed control module. When the apparatus is in neutral and the parking brake is set, the control module can automatically start the APU generator and shut the chassis engine off, allowing the APU to run heating, air-conditioning, and lighting. The operator can restart the chassis engine at any time, and that will shut off the APU.”

1 Rosenbauer introduced its Green Star Technology Auxiliary Power Unit (APU) for the fire service in 2009 with this diesel-powered unit driven by a Kubota engine. (Photos 1 and 2 courtesy of Rosenbauer.)

3 The SG-09 APU, powered by a 33-horsepower diesel engine, is used by Spartan ER for customers that want an APU on their fire apparatus. (Photos 3 and 4 courtesy of Spartan ER.)

Wyatt Compton, Spartan ER’s product manager for emergency response, says Spartan has installed more than 100 SG-09 Green APU diesel-powered units on pumpers, aerials, and rescues. “The 33-horsepower diesel engine powers a 9-kW generator and a 12-volt alternator,” Compton says. “We use a larger diesel because our goal is to be fuel efficient and quiet to meet our 85-decibel exhaust requirement.”

Compton points out that the user interface to control the SG-09 APU is a touch pad display that can be located almost anywhere on a fire vehicle and also can be installed in multiple places. “Once the chassis parking brake is set, the system monitors the chassis and will automatically start the APU and shut off the main chassis engine after a factory set time,” he says. “The system also can be manually started to provide additional DC and/or AC power if needed.”

Joe Hedges, product manager for chassis and aerials at E-ONE, says E-ONE offers both diesel-engine-driven and battery-driven APUs. “If a fire department wants 110 volts on its truck, then they would have to go with a diesel-driven system,” Hedges points out, “but if they don’t need 110 volts, then they can choose the battery system that we offer. We partnered with ZeroRPM to integrate a battery APU on fire apparatus, using their Idle Mitigation System that uses lithium-iron batteries. The fire department can set a time limit of when the system takes over and shuts the chassis engine down as long as the transmission is in neutral, the parking brake is set, and the pump is not running.”

“Those fire departments that have a tremendous amount of electrical load, like a command truck or heavy rescue carrying light towers, and equipment needing 110-volt power go with a diesel-powered APU, which usually is placed on top of the vehicle because of the amount of space it takes up as well as the noise it produces,” Hedges says. “The diesel system works in the same way as the battery system.”

4 The digital control module used on the SG-09 APU.

Paul Newton, vice president of sales and marketing for Harrison Hydra-Gen, says his company makes a diesel-powered APU “that is shaft-driven, with no belts, and in a very thin package. It’s designed inline so it’s easy to fit in an apparatus’s dunnage area.” Harrison’s 10K200 APU provides 10 kW of AC power and 200 amps of DC power, Newton says. The APU is powered by a T4F Kubota® three-cylinder diesel engine that maintains the chassis’ 12-volt DC electrical system by running both the AC generator and DC alternator simultaneously, he notes.

Harrison Hydra-Gen debuted its H Power battery-powered APU at FDIC International 2019, Newton says, specifically for those customers that don’t want any engine running on a scene. “The 200-amp lithium-ion battery model will run all the lights on a fire truck, while the 400-amp model will handle both lights and air-conditioning,” Newton observes. “The benefits of using a battery-powered APU are great because it eliminates recurrent diesel particulate filter regenerations, there’s less on-scene noise, it reduces fuel consumption, it provides less wear on the power train, and it requires no maintenance.”

Joe Scott, engineering manager of the Dublin, Ohio, facility for Sutphen Corp., says Sutphen recently installed Harrison Hydra-Gen APUs on two pumpers that it built for the Durham (NC) Fire Department. “The diesel engine is tied into the pumper’s chassis diesel tank,” Scott says, “and if the vehicle’s parking brake is set and the pump is not engaged, after a set amount of time, the APU will turn on and switch off the chassis engine, running the scene lighting and air-conditioning/heating systems.”

7 Stealth Power makes a lithium-ion battery pack APU with a charger inverter that is typically used by ambulances and other EMS vehicles. (Photo courtesy of Stealth Power.)

Bill Needles, sales director for Stealth Power, says his company makes a lithium-ion battery pack APU with a charger inverter that is used mainly by ambulances and other emergency medical services (EMS) vehicles. “If the vehicle is in park and the emergency lights are off, the system turns the chassis engine off and gives full power to air-conditioning, heating, laptops, communications equipment, and other electronic gear,” Needles says. “If the rig sits for 45 minutes on battery power, the system will automatically restart the chassis engine, recharge the battery packs, then shut the engine down again and go back to battery power.”

Needles notes that Stealth Power has its battery-powered APUs on more than 300 Fire Department of New York (FDNY) ambulances. “We are doing another 88 trucks for them this year,” he says. “FDNY is seeing a 34 percent savings on engine hours, which translates into millions in fuel savings and also much less emissions. FDNY is the busiest EMS provider in the world, running more than two million calls a year.”

Bob Hansen, owner of XRT Power Systems, says XRT offers a line of APU diesel generators in models including 5.5, 8, 10, 11, 12.5, and 14 kW. “These are Westerbeke diesel generators/auxiliary power systems that are quiet operating, are all weather starting, have automatic safety shutdowns, and are available with multistation remote controls,” Hansen points out. “We supply the generator, the alternator, the start/stop controls, and the remote digital controls, and the manufacturers build the APU auto start into their control panel.”