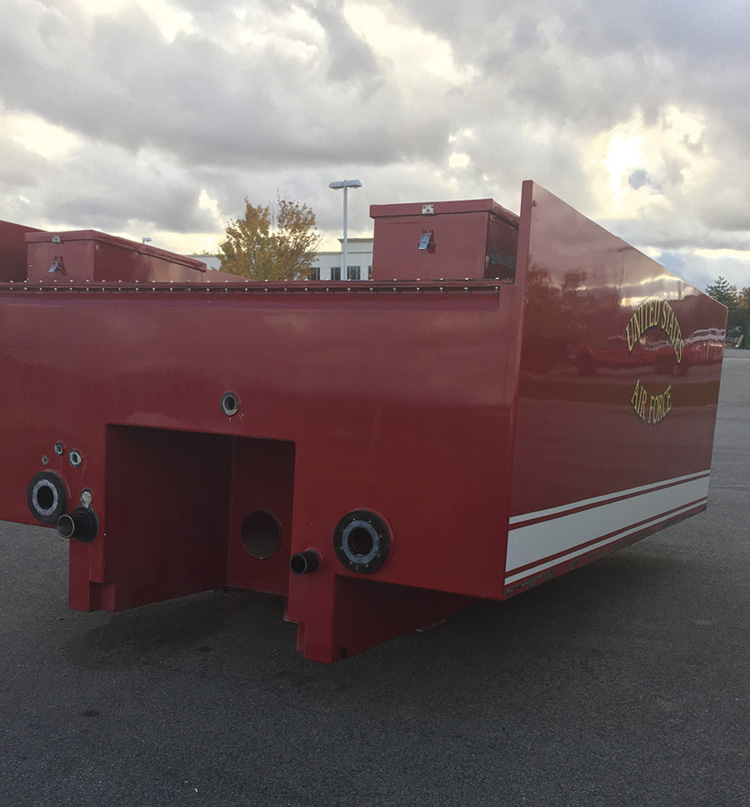 Copolymer polypropylene, fiberglass, steel, and stainless steel—there are several choices available to fire departments when it comes to their apparatus water tanks.

In addition to the material they are made of, size and physical dimensions of water tanks also play an important part in the ergonomic design of the vehicle.

Andrew Lingel, president of United Plastic Fabricating Inc. (UPF), says his company makes the Poly-Tank III out of high-impact copolymer polypropylene that is sealed using a Polypro Seal technology. “Water tanks have been getting more complex over the past 10 years,” Lingel points out. “Fire departments are requesting a lot of options and custom features like through-the-tank tunnels for ladders or hard suction hoses and notches for compartments or to run plumbing and wire conduits. We’ve even done notches for backup cameras.”

Tim Dean, president of Pro Poly of America Inc., says that his company has been making water tanks for fire vehicles since 1991 and has produced more than 25,000 water tanks and truck bodies. “We’ve seen the popularity of copolymer polypropylene water tanks take off because they basically are maintenance free,” Dean points out. “They are much lighter than steel and stainless steel tanks and somewhat lighter than fiberglass tanks but are very versatile, durable products that give fire departments the comfort of not dealing with corrosion.”

With an FRP water tank, the key is that there are no seams, Martin says. “FRP is a molded seamless tub,” he says, “that has a bolted-on gasket lid. By contrast, copolymer polypropylene water tanks are made out of a sheet material that is extrusion welded together.”

APR has been doing a lot of work for the California Department of Forestry and Fire Protection and the U.S. Forest Service, Chad Falls, director of sales for APR Plastic Fabrications, Inc., adds, beefing up water tanks on wildland apparatus. “We have stiffened certain areas of their water tanks and spring-mounted others to make them last longer because of the pounding they take in wildland areas,” Falls says. “And, both those organizations want water tanks that save space on the apparatus yet are able to be larger to carry more water.”

Lingel notes that the biggest challenge for water tank manufacturers is that every water tank is different. “We make about 5,000 tanks a year, and about 3,000 of them are unique designs,” he says.

Falls says there is really no “typical” fire truck water tank anymore because original equipment manufacturers and fire departments are asking for more and more water tank customization. “Most departments want the most water they can carry on a fire truck,” he says, “but then they want it customized, for example with ladder tunnels, dropped hosebeds, or notches for a portable water tank compartment or for a self-contained breathing apparatus bottle compartment. Water tanks aren’t square anymore.” 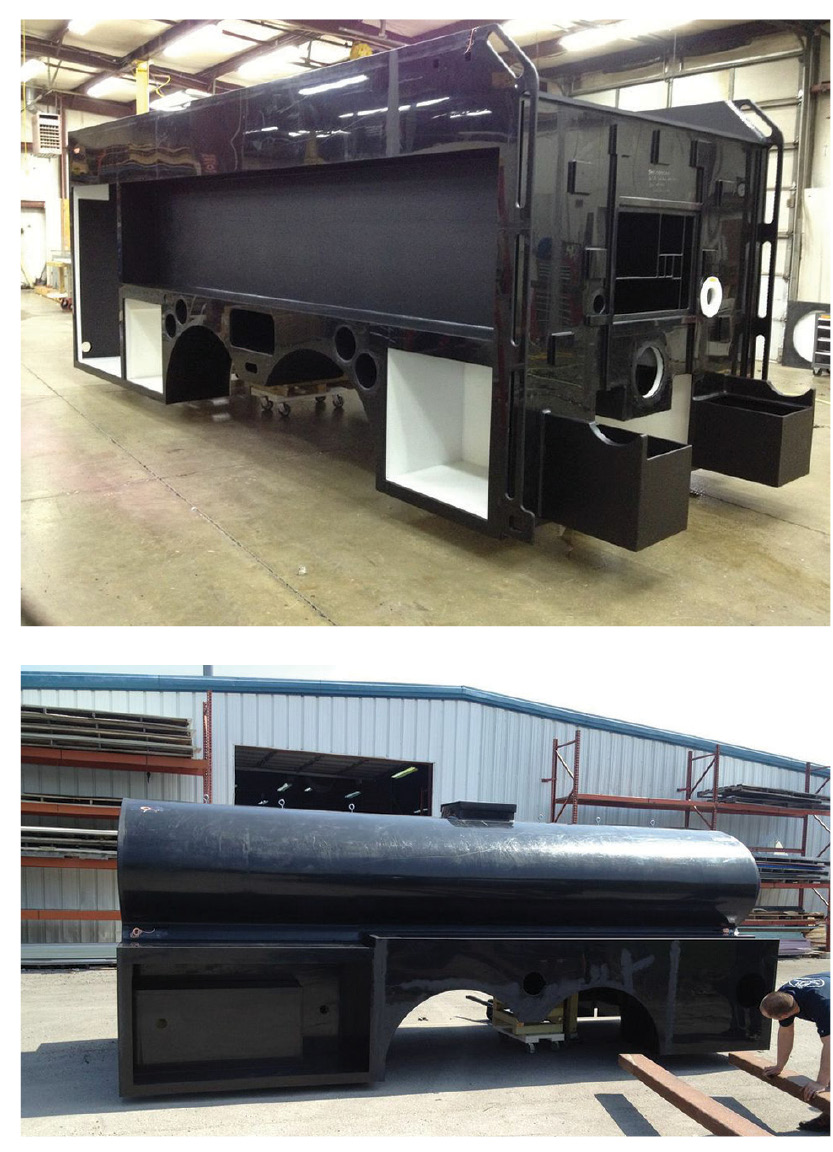 Pro Poly and PolyBilt see a lot of requests for ladder tunnels in water tanks, Dean says. “In the tanker world, departments are looking for through-the-tank hard suction storage,” he adds, “and portable water tank storage on the side of the tank. On smaller skid tanks and in wildland applications, we’ll do an array of different things, from hose reel mounts to suction tubes, crosslays, and bolted-on toolboxes.”

Customization is popular with both types of tanks, Martin adds. “We have seen all kinds of odd shapes and sizes of water tanks,” he says. “We have even dropped water tanks down into the frame rail area to keep the tank’s center of gravity low on the apparatus.”

5 This is a typical copolymer polypropylene skid unit water tank built by Pro Poly with fork lift runners in the bottom of the unit. (Photos 5 and 6 courtesy of Pro Poly of America Inc.) 6 This PolyBilt™ unit by Pro Poly and Darley integrates a skid water tank into a polyprene body for a single unit.

Falls notes his company’s niche is custom copolymer polypropylene tanks of 2,000 gallons or more. “T-tanks and rectangular tanks are the most popular types used in fire apparatus,” Falls observes, “but wetside and elliptical tanks continue to be used for very large applications. In fact, many large tanks combine the water tank and apparatus body into a single unit.”

Falls notes that a lot of departments choose a T-tank because it typically has a lower center of gravity than other types. “It also lends itself well to a ladder tunnel and a portable water tank mounting or compartment,” Falls says “But these days, pretty much every water tank, no matter what type, is a custom tank.”

Dean notes that in 2000, Pro Poly and W.S. Darley & Co. partnered in creating PolyBilt LLC, a company that produces copolymer polypropylene water tanks and truck bodies as a single unit. “We patented the process more than 10 years ago,” he says. “The combined unit turns out to be very strong and durable and can be designed to accommodate any style of water tank: T-tank, rectangular, elliptical, or skid.”

Lingel says that UPF makes the Defender series of skid tanks for wildland use. “We recently enhanced the Defender 2 and 3E versions with recessed covers, instead of flush covers, and sight tubes for a visual water level,” Lingel says. “The difference between the 2 and 3E models is that the 3E has a copolymer polypropylene pump platform with side gussets.”

UPF also makes the Integrator fire water tank and body. “We build the two separate components and then weld them together into a single package,” Lingel points out. “The OEM can then drop a single item on the chassis and mount it, which has a lot of benefits for smaller builders. The unit only needs paint to be finished and is used a lot on apparatus that are being rehabbed.” 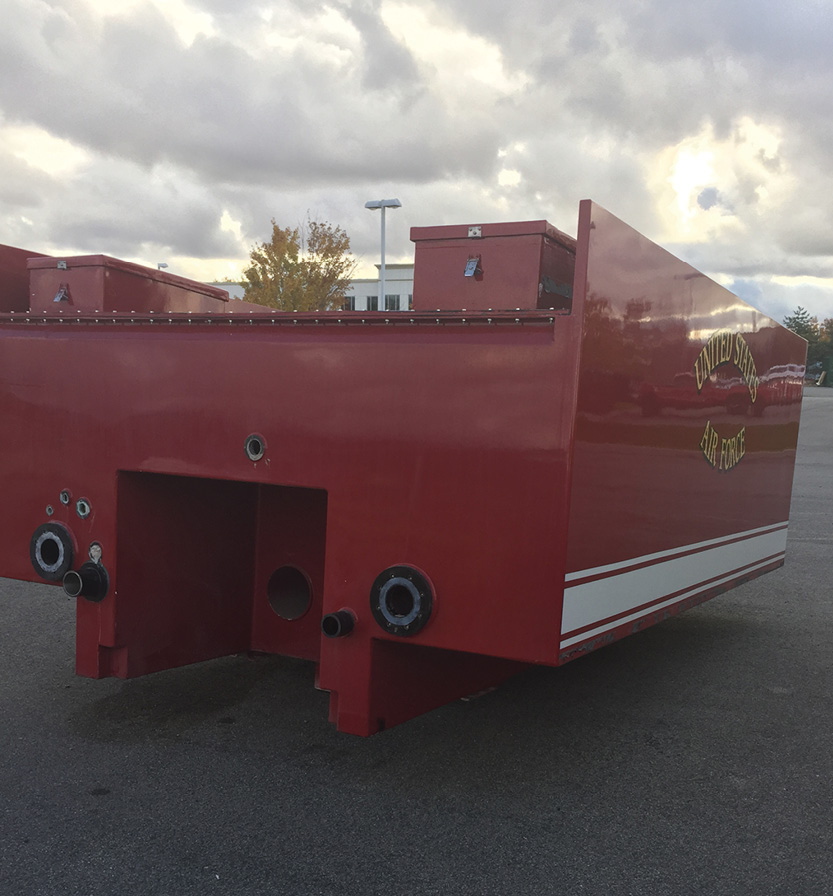