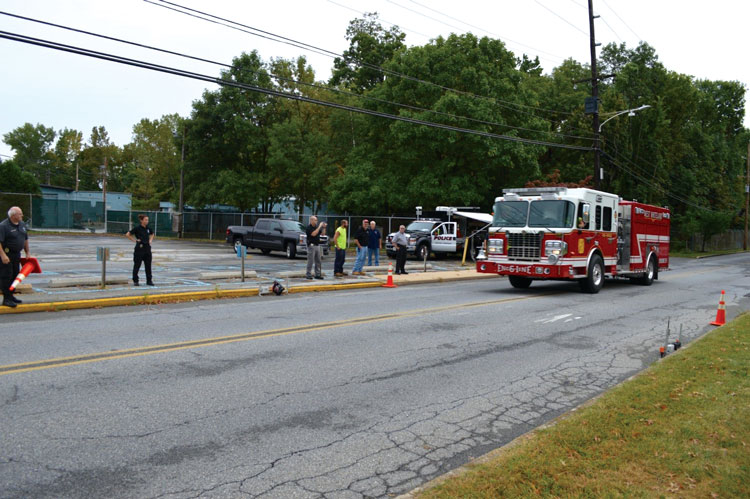 In last month’s article, we discussed the fact that a fire apparatus operator who accelerates or brakes while rounding a curve may create a combined g-force that exceeds the available grip of the roadway. When this occurs, the vehicle tires will break traction with the road and the vehicle will lose control.

Regular readers will remember that on a dry road, a fire apparatus will probably roll over before enough lateral g-force is generated to cause the tires to lose their grip on the road. However, on a slick road, the tires on the fire apparatus may break traction and start to slide before enough lateral g-force is created to cause the vehicle to roll over.

Now let’s look at the same curve we have examined in previous months. In our real-life example, the radius of the curve is 320 feet. Using this 320-foot curve radius, we can calculate how much g-force the fire apparatus operator will generate as the fire apparatus rounds the curve at different speeds. The corresponding g-force is provided in Table 1.

Table 1 shows us that at 35 miles per hour (mph), the fire apparatus will experience 0.26 g. At this speed, the driver and passengers will probably start to feel uncomfortable, as most people don’t enjoy a g-force that exceeds 0.20 to 0.30 lateral g. A trained professional driver will recognize this fact and begin to carefully slow down. However, we will assume that this fire apparatus is staffed by personnel who don’t mind that their faces are starting to press against the side windows as they round the curve at almost 0.30 g! Instead, the driver continues through the curve at 35 mph and, while the amount of g-force has not reached the rollover threshold of an average fire apparatus (typically 0.50 to 0.60 lateral g), the driver is close to using up the available grip between the tires and the slick road. This is quite evident when we examine our friction circle (Figure 2); we see that although the fire apparatus is just on the verge of breaking traction with the slick roadway, it has not generated enough lateral g-force to flip over.

Figure 2. The red circle represents the friction circle of our slick road, which has a drag factor of 0.30 g. For this discussion, we have added the blue circle, which shows the average rollover threshold of a fire apparatus, in this case 0.50 g. At 35 mph, the fire apparatus operator is generating 0.26 lateral g while rounding the curve discussed in Table 1. Notice that on a slick road with a drag factor of 0.30, the fire apparatus operator has used up almost all the available grip between his tires and the roadway. However, while 0.26 g is close to the point of causing the fire apparatus tires to break traction with the slick roadway, the driver has not exceeded the rollover threshold of the vehicle (the blue circle).

Now let’s see what happens at 40 mph: The fire apparatus is experiencing 0.33 g. At this speed, the vehicle has not generated enough lateral g-force to flip over. However, the driver has generated a lateral g-force that is greater than the drag factor of the slick road (0.30 g). As a result, the tires break traction with the roadway (Figure 3).

Figure 3. At 40 mph, the driver has generated 0.33 g. This amount of g-force is outside the friction circle of the slick road, which is depicted as the red circle. However, the driver has not generated a lateral g-force that is greater than the rollover threshold of the apparatus, which is represented as the blue circle. On this slick road, the fire apparatus tires will break traction and slip before there is enough lateral g-force to cause the vehicle to roll over.

If this scenario took place in a large open parking lot, the vehicle would probably enter a spin and spin to a stop. However, most roadway travel lanes are only 12 feet wide. As a result, when the fire apparatus tires break traction, they will most likely slide off the travel lane. When this occurs, the tires will likely strike a soft shoulder or fixed object along the roadside. The soft shoulder or fixed object will “trip” the vehicle and could induce a “tripped rollover.”

Fire apparatus operators must understand the changing road conditions associated with slick weather. If there is rain, snow, sleet, or ice on the road, the driver will not have as much tire grip available as on a dry road. For this reason, fire apparatus operators must slow down during inclement weather to prevent the tires from slipping off the road and causing a roadside crash. Slow down!

Chris Daly will present “Drive to Survive” at FDIC International in April 2020. The concepts discussed in this series will be reviewed in great detail. Go to www.fdic.com to register.