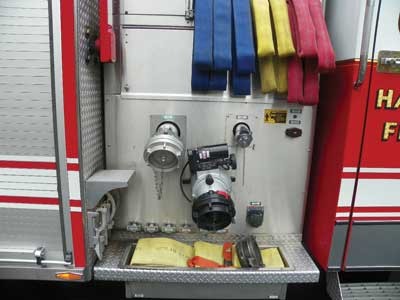 Some apparatus purchasing committees (APCs) consider fire pump discharges a mundane topic-a matter taken for granted. Some erroneously believe discharge quantities, locations, and sizes are cast-in-concrete, sacrosanct requirements never to be doubted. Tactlessly questioning the topic during the specification (spec) writing process can cause dissension within the ranks and unintended controversy with vendors.

Regardless of whether their questions are or appear controversial, APCs and vendors should applaud queries from firefighters. Firefighters showing interest in their workplace (the fire truck) should be commended. Their participation will make APCs more attentive and accountable and can assist in making successful purchases. Hopefully, APCs will not construe firefighters’ honest questions as questioning their authority and competency to purchase fire apparatus.

When discussing pump discharges, vendors should walk a fine line. An APC may mistakenly believe its expertise and knowledge is being challenged if a vendor asks a question the committee never considered or can’t answer. Asking too controversial a question may jeopardize a sale. Conversely, a vendor not candidly addressing pump discharges with an APC and, in particular, an uneducated one, is doing the fire department a disservice. Concurrently, APCs’ questions must be answered honestly and forthrightly. With today’s social media and Internet access, a committee member may already have the answer to a question being asked merely to “test” a vendor. It’s not right, but it happens.

“A Standard” or “the Standard”

Standard can also mean a benchmark or a requirement. In the fire truck world, referring to “the standard” means National Fire Protection Association (NFPA) 1901, Standard for Automotive Fire Apparatus. Buyers, beware. A vendor claiming it’s an NFPA 1901 requirement to have a certain quantity of discharges in mandatory locations is either misinformed, is talking about his OEM’s standard configuration, or hasn’t completed the fire apparatus selling apprenticeship.

Note that NFPA 1901 requires two two-inch or larger discharges for preconnects. However, discharges with two-inch valves do not count in rating a fire pump.

Purchasers can locate 2½-inch discharges anyplace they want with one caveat. Sentence 16.7.9.1 says, “No discharge outlet larger than 2½-in. (65 mm) shall be located at the pump operator’s position.”

NFPA 1901 does not require a given number of certain sized outlets on a pumper. That allows purchasers more leeway than is generally known in choosing the number, capacity, and location of discharges. As an example, a 1,500-gpm pumper can be NFPA 1901 compliant-but not necessarily practical-when equipped with just the two required 2½-inch discharges with a rated capacity of 250 gpm each and a single five-inch discharge with a rated capacity of 1,000 gpm. Rated capacity is important, often misunderstood, and addressed further on.

In fairness to manufacturers, it is prudent for them to have a practical means for salespeople to “lay out” discharges on a rig. Most use a basic or standard configuration, usually NFPA 1901 compliant, reflecting what the OEM typically sells or wants to sell. Standard packages are effective sales tools. When meeting with a purchasing committee, vendors can easily modify a standard configuration to meet an APC’s requirements. Whether an OEM’s standard package reflects the least expensive or the most popular size discharges or the most desirable locations is solely in the eyes of the beholder. NFPA 1901 has no say in a manufacturer’s standard package. Vendors are remiss if they imply that their in-house standard package is an actual NFPA 1901 requirement.

Purchasers, vendors, and spec writers are not always in sync when addressing flow tests, flow rates, rated capacities, and requirements. NFPA 1901 does not require flow testing for individual discharges. Nor does it address acceptable friction losses, minimum sizes and lengths of piping runs, or maximum pump discharge pressures when addressing flow rates. Exercise caution. Individual perceptions may cause confusion.

There is no requirement for a specific or minimum size valve for various flow rates. Sentence 3.3.50 defines discharge outlet size as “the nominal size of the first fire hose connection from the pump on a discharge.” That statement can open Pandora’s Box. Vendors may proffer conflicting flow rates, and purchasers may expect unreasonable flows. As an example, it is generally accepted that a three-inch RHS discharge may flow 1,500 gpm. It is illogical to believe the same 1,500-gpm flow is achievable through a three-inch valve piped to the rear of a pumper through 15 feet of three-inch pipe with a half dozen 90-degree elbows in the piping run-regardless of the first hose connection’s size. Be careful how purchasing specifications are written because both preceding examples meet “the standard.”

In reality, a pumper’s discharge outlets will probably yield much more than their listed ratings, which sentence A.16.7.1 acknowledges: “The flows listed for each outlet size are minimum and are for rating purposes only. If piping and valving are sufficient, much higher flows for a given outlet might be achievable.” Be advised that higher flows may be achievable, but the purchaser does not get credit for them. What’s listed in Table 16.7.1 is all you get.

Without causing angst in an APC, an astute salesperson should diplomatically ask what flow it expects from, as an example, a discharge intended to supply large-diameter hose (LDH). Judicious salespeople will carefully tell an APC that just because they put an LDH adapter on a 2½-inch or three-inch discharge, the discharge is not automatically rated as a high-capacity discharge. Why not? NFPA 1901 does not specifically address or have requirements for high-capacity or LDH discharges.

A challenge for APCs is who to believe if multiple vendors verbally claim they’ve flow tested discharges at similar locations with disproportionate results. The same dilemma occurs when vendors claim the same flows, and you know they’ve piped the discharge differently! As an example, one vendor pipes a three-inch discharge straight off the pump to a RHS discharge claiming an 1,800-gpm flow. Another may pipe it through a discharge manifold using several fittings to reach the same location and claim the same flow. Purchasers should bear in mind that vendors are called salespeople for a good reason. Some excel at it. Compare apples to apples.

Sagacious salespeople will not argue with an APC that can’t accept it is spending thousands and thousands of dollars for a four-inch electrically controlled valve with four-inch piping that is only rated for 1,000 gpm when in reality it may flow in excess of twice that amount.

It is possible for an APC to “over spec” discharge outlets. It seems illogical that a vendor would recommend a valve and piping configuration intended for LDH use unless it asks the APC what flow it desires. Who determines an acceptable friction loss in the plumbing when pumping a required flow to that first fire hose adapter on a discharge outlet?

Perceptive OEMs have documented flow tests on the various valve and piping arrangements they have installed. Their vendors can confidently make recommendations and substantiate them as well as provide technical purchasing specifications for them. Be concerned if a vendor cannot or will not.

APCs easily add five or six extra discharges while leaving an equal number unused on the side pump panels. Does it make sense to add extra outlets with a flow rating equal to the pump’s total capacity while an equal number are left capped on the panels to be seldom, if ever, used except for the annual pump test?

Sentence 16.6.10 states that if suction inlets are equipped with valves and adapters that remain in place when the vehicle is in motion, those appurtenances “…shall not project beyond the apparatus running board.” Strangely, NFPA 1901 does not require the same for discharge outlets. APCs should consider the same requirement in their purchasing specifications for discharges with LDH adapters on the sides and rear of the apparatus.

Previously mentioned sentence 16.7.9.1 says, “No discharge outlet larger than 2½-in. (65 mm) shall be located at the pump operator’s position.” If a crosslay located above the pump operator’s panel or a speedlay just ahead of it is piped with three inch, do they meet NFPA 1901’s requirements?

An ineffectual purchasing specification may read, “There shall be one (1) discharge located on the passenger side dedicated for LDH. It shall be equipped with a minimum 30-degree downturn elbow, five-inch Storz connection, and five-inch Storz cap with cable attached to the apparatus.” The spec writer shouldn’t have wasted ink and paper writing that. The requirements are too vague. There are too many variables for an APC to evaluate. It did not specify the valve size. The elbow itself could be three, four, or five inches. Piping from just a three-inch valve could be three, 3½, or four inches. Is the valve electrically operated? If manually operated, is it by a push-pull rod or a hand wheel? More importantly, the spec did not specify discharge or flow rate.

Purchasers should be aware that NFPA 1901 does not require testing discharges to certify flow. Is it wise for an APC to blindly believe a flow rate verbally quoted by the preferred vendor? If the APC awards another vendor the contract for the new rig, does the APC know if the discharge proposed by the successful vendor will actually perform as verbalized by the favorite vendor?

It may be advisable to specify flow rates for discharges intended for LDH use as well as for remotely located discharges. Requiring third-party testing and flow rate certification at the time of the fire pump’s certification test (at 150-psi discharge pressure from draft) is being fair and equitable to all bidders. By specifying how testing is to be conducted, all prospective bidders know exactly how their proposed performance will be verified. A third-party certified test will eliminate doubt and biased evaluations and will separate fact from fiction. Good luck.