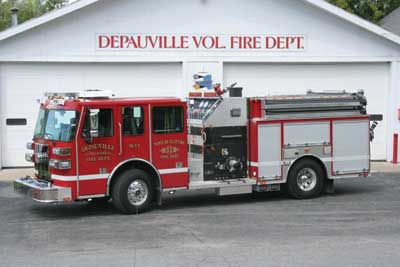 Fire apparatus specifications (specs) have been characterized as proprietary, open, generic, manufacturers’, design, performance, contractors’, bid, purchasing, and even deceptive. Individual authors and speakers have their own descriptions for each that are often influenced by personal experiences and occasionally prejudiced by personal agendas.

That’s life. This article will not address the content, intent, or partiality of any specification or the ramifications of using one in lieu of the other. That’s a local matter-do what’s best for your fire department. It does address the format in which a specification, and in particular a purchasing specification, is written. The objective is to make the document less confusing and easily readable.

A purchasing specification is a document written by an apparatus purchasing committee (APC) and promulgated (put to bid) by the authority having jurisdiction (AHJ) describing a fire apparatus it wants to purchase. Some commentaries portray writing fire apparatus purchasing specifications as an overwhelming task so technically oriented that only highly trained professionals should be allowed to undertake it. That is not necessarily true. Although there are specific legalities and guidelines APCs must follow, purchasing specifications that are overly lengthy and not easy to understand can cloud the process and discourage APC members. There may be spec writers who, for pecuniary reasons, may intimidate purchasers when describing the process.

Beware of questions and statements such as, “Would you spend hundreds of thousands of dollars for a new home designed by a self-proclaimed architect with no credentials, no experience, and no education in engineering? Would you let an apprentice electrician design and install your home’s electrical system? If you were an employer, would you let an employee lacking technical expertise spend half a million dollars of your money on a piece of intricate machinery? Why would you let any of those three write a set of purchasing specifications for your fire truck? Let a professional do it.”

Playing on Expertise and Knowledge

Read between the lines when you are told, “You’ve got to be very careful writing specs for a fire truck. New apparatus must meet the requirements of no less than 10 National Fire Protection Association (NFPA) minimum standards with the primary document being NFPA 1901, Standard for Automotive Fire Apparatus. NFPA 1901’s Chapter 2 makes reference to more than 70 publications from 15 organizations ranging from the Society of Automotive Engineers to the United States Government. NFPA 1901 sentence 2.1 says: ‘The documents or portions thereof listed in this chapter are referenced within this standard and shall be considered part of the requirements of this document.’ So you’d better know what you’re writing.”

Purchasers shouldn’t be intimidated. It’s doubtful anyone working in the apparatus industry can name all the referenced publications or even the applicable NFPA standards! Most of the hard work has already been done-it’s all inside NFPA 1901. Consequently, an APC doesn’t have to concern itself with whether some component part meets a voluntary or a consensus standard of the American Society for Testing and Materials (ASTM), the American Society for Nondestructive Testing (ASNT), or a mandatory requirement by some obscure government agency.

Vendors and outside spec writers do not appear to prescribe to the keep it simple and sweet (KISS) principle for streamlining and simplifying purchasing specifications. Their documents seem to be lengthy, flowery pieces of literary prose that are hard to read and harder to understand.

Purchasers who think spec writers start with a blank piece of paper each time they write a new specification are mistaken. Consultants and fire apparatus manufacturers-original equipment manufacturers (OEMs)-have individualized computer-generated “standard” specifications. OEM specs are proprietary to their product lines, and although the content may differ, the general format of all OEM documents is similar. Some OEMs use the same computer software program to generate their individual specs.

An OEM’s standard spec is used as a template-a master framework similar to a form where an OEM fills in the blanks with its requirements. OEM outsourced parts and piece suppliers also have their own highly descriptive specifications for their products. They follow the same general templates used by the apparatus manufacturers. When preparing a purchasing spec for a fire department, the OEM uses its standard spec and fills in the blanks as needed with suppliers’ specifications that meet the each customer’s needs. That’s why the descriptions of, as example, an outsourced fire pump, booster tank, or valve are nearly identical from one OEM’s spec to another’s.

The more “longwinded” an OEM and the component parts suppliers are when writing their descriptions, the lengthier the document is. The downside to a long, highly detailed and technical specification is that it may be hard to read. That can be difficult for an APC to “work with” in a committee setting. Chances of making grammatical mistakes and overlooking items increase in a lengthy document. You don’t need all those words. The KISS philosophy of keeping it short and sweet has merit.

APCs can make purchasing specs easy to understand by abbreviating the format in which they are written and by changing the attitude of both the people who write them and the people on the purchasing committee. Condensing specs is easy. Changing attitudes will be a challenge. To make the KISS process workable, there are basic principles and theories that APCs should accept and follow.

Regardless of whether a vendor-supplied purchasing specification is biased and proprietary, the decision to use it or not is a local matter. Choose wisely; carefully; and, more importantly, legally.

It is crucial not to compromise the desired level of quality or minimize the standard of workmanship when abbreviating purchasing specs. Although it is understandable that some political subdivisions do not want OEMs to write a fire department purchasing specification, almost all APCs will interact with vendors. Vendors are an excellent resource for fire departments to find out what is on the market, what works, and what doesn’t. Use them; don’t abuse them.

Be aware that even if a fire department uses an OEM’s standard specification as a template when writing its own document, it can abbreviate and shorten those specs. Some OEMs may see the advantage in making their own specifications uncomplicated, easily understandable, and stress-free to read. They might even start condensing specs on their own.