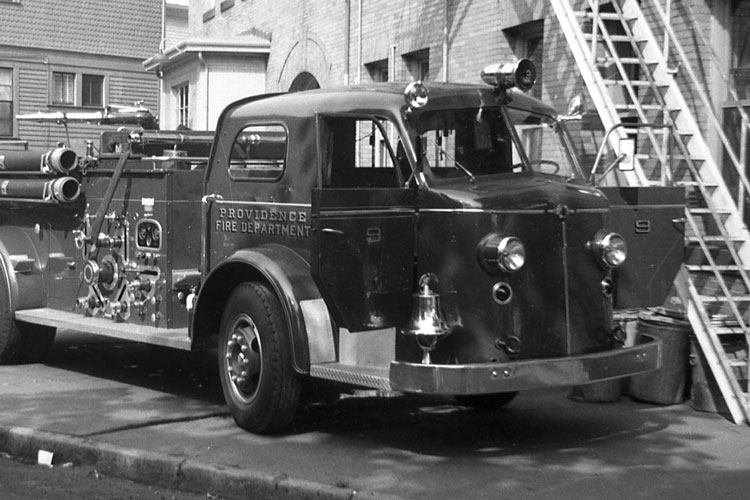 Asking a group of firefighters if they prefer fire apparatus mounted on a custom cab and chassis or a commercial cab and chassis may result in a discourse as contentious as debating the attributes of straight tip vs. fog nozzles, aluminum vs. wooden ground ladders, or what the best color to paint a fire truck is.

The backbone of every fire truck is the combination of its chassis components. Part 1 only addresses the development of custom cabs. Part 2 will address cab construction and the differences between custom and commercial cabs.

The original custom cabs were built by manufacturers of complete fire apparatus including the chassis. Some that are no longer in business include Mack, Maxim, Peter Pirsch, FWD, Ward La France, Oren, American La France, the original Ahrens-Fox, Hahn, Buffalo, Stutz, Sanford, and Crown Coach-a late entry into the apparatus field. The first custom cabs were located behind the motor and were not much more than an open seat sitting on top of a fire pump. In 1928, Peter Pirsch delivered the first custom built, fully enclosed cab on a fire truck to Monroe, Wisconsin. It was on a chassis with the motor located ahead of the cab, commonly referred to then and today as a conventional cab. In 1939, American La France introduced the industry’s first custom cab-forward chassis-the JO/JOX series, a square, unappealing design that no manufacturer copied. Some early cab-forward commercial chassis were referred to as midengine chassis, meaning the front seats were located ahead of the motor and radiator. The definition shouldn’t be confused with today’s fire service understanding that a midengine chassis is one where the motor is not located within the cab at all.

In 1947, American La France introduced its popular 700 Series custom cab-forward design that was the forerunner of today’s custom cabs (photo 1). Other apparatus manufacturers introduced their own designs, although it took most almost 10 years to do so. Each apparatus manufacturer that built its own cab and chassis had a unique design whereby firefighters could readily identify the manufacturer of the rig coming down the street.

From the mid 1960s to the 1990s, builders that manufactured just a bare custom cab and chassis (no body or pump house) fulfilled the needs of smaller apparatus builders that did not build their own. Several manufacturers that did build their own also purchased outsourced cabs and chassis, advertising them as entry level models. It was common for apparatus purchasing committees to evaluate multiple cab and chassis manufacturers and choose one prior to looking at the final assemblers’ pump, plumbing, paint, and body work.

In 1975, Pemberton Fabricators of Rancocas, New Jersey, purchased Imperial Fire Apparatus, a regional builder of complete fire apparatus that had been in business for only a few years. Pemberton manufactured the Pemfab line of custom cabs and chassis for about 20 years before closing.

The Duplex Power Car Company, in Charlotte, Michigan, started in 1906. A 1916 spinoff was the Duplex Truck Company, which later merged with the Warner & Swasey Company and eventually was purchased by an offshore company. Depending on the era and owner, its custom cabs and chassis were marketed as a Warner & Swasey, a Duplex, or a Simon-Duplex. It disappeared in the late 1990s.

Spartan Motors also originated in Charlotte, Michigan. It was started by several former employees of Diamond-Reo Trucks after it went belly up in the 1970s. Pemfab and Duplex are gone; however, Spartan still supplies custom cabs and chassis to various apparatus manufacturers, as does HME as noted later herein.

Not every early manufacturer fabricated its cabs in house. An Internet search shows there are three companies that did and still manufacture custom fire apparatus cabs. Kidron Metal Products, in Kidron, Ohio, has been in business since 1948. Its Web site says it is a manufacturer of custom fire and emergency cabs. It further states that it has the ability to fabricate with steel, galvanneal, aluminum, stainless steel, and plastics. VT Hackney is Kidron’s parent company, and VT Hackney is also the parent company of Hackney, which manufactures complete emergency vehicles.

Marion Body Works of Marion, Wisconsin, has been around since 1905. Its Web site says Marion has “fifty years’ experience building all aluminum bodies for emergency vehicles.” It also says that it offers a “fully extruded aluminum design” of custom fire truck cabs. I believe it has been building cabs for more than 20 years. It also manufactures complete fire apparatus.

Truck Cab Manufacturers (TCM), Cincinnati, Ohio, has a lineage going back to 1870. Its Web site claims it is “one of the oldest manufacturers of custom cabs.” They are available in steel, aluminum, galvanneal, and stainless steel. TCM’s cabs were commonly called the “Cincinnati Cab,” and the company claimed to supply most of the major apparatus manufacturers. Larry Shapiro’s book Pumpers Workhorse Fire Engines notes that the TCM cab was used by some apparatus manufacturers that also built their own cabs. Regardless of whose nameplate was on the TCM cab and how much a manufacturer tried to customize it, the cabs all looked pretty much the same (photo 2).

HME, Incorporated, can trace its roots back to the Hendrickson Motor Truck Company, which started in 1913 building heavy-duty trucks. It has a unique and convoluted pedigree. One of its offspring was a hybrid custom cab-forward fire apparatus chassis available in the early to mid 1960s. Hendrickson built the chassis, which featured an International 477-cubic-inch V8 gasoline engine and a custom cab supplied by TCM. It was designated the model CO8190. Interestingly, the cab and chassis were marketed by and carried the nameplate of International Trucks. A 1967 advertisement in Fire Engineering says, “Read this before you pay $2,000 more for a custom built chassis.” The advertisement (photo 2) was a shot across the bows of the apparatus manufacturers of the day that built their own cabs and chassis. Mystifying was the fact that a Class 8 heavy truck manufacturer (Hendrickson) was supplying a chassis with an outsourced custom cab (TCM) that was sold but not advertised as a custom chassis by a larger Class 8 heavy truck manufacturer (International) that didn’t build it. A Class 8 truck is one with a gross vehicle weight rating of more than 33,000 pounds.

Hendrickson started marketing cabs and chassis under its own name in the early 1970s. There have been conflicting stories as to who purchased who, what part, and when. My interpretation of what happened is Hendrickson was sold to the Boler investment group in 1978, which in turn sold either a portion or all of Hendrickson’s “mobile equipment division” to Kovatch Mobile Equipment (KME) in 1985. Supposedly, a portion of Hendrickson’s assets were acquired or inherited by Hendrickson’s current owners, Valley Truck Parts, in Grand Rapids, Michigan, which shortened the name to HME. KME also purchased Grumman’s fire apparatus division after that company discontinued manufacturing fire apparatus in 1992. Today, KME and HME both manufacture their own cabs and chassis and are competitors in the manufacturing of complete fire apparatus.

Mack fire apparatus historian Harvey Eckart says fire truck manufacturers that built a cab derived from a bus design were Crown, Ahrens-Fox, and Mack. Intercity and local transit buses used cab-forward designs before the fire service. Ford had one on the road in 1937.

Today’s manufacturers would cringe if people said their apparatus “looks like a school bus.” However, two former and well respected apparatus manufacturers-one on the East Coast and one on the West Coast-have that pedigree in their lineage.

The Crown Coach Historical Society’s Web site has a posting describing the book The Dentist Who Built Buses and Fire Engines authored by Ahrens-Fox historian Ed Hass. Paraphrasing it, Hass mentions that a Mack Truck executive left Mack for Crown Coach and proffered the idea that Crown could be competitive building fire apparatus cabs and chassis based on a Crown bus design. They did, and it was very successful on the West Coast for 34 years.

On the East Coast, a complicated and very confusing relationship developed between Mack, C.D. Beck, Ahrens-Fox, and Approved Fire Equipment. Hass is also the Webmaster for the Coachbuilt Web site that says Ahrens-Fox changed hands numerous times and ultimately contracted with the C.D. Beck & Company, in Sidney, Ohio, to build the last 25 Foxes sold. Beck’s primary business was manufacturing buses. Mack Trucks purchased Beck in 1956. The Web site states: “A few months ahead of the Mack purchase, Beck introduced the revolutionary new cab-forward design: Ahrens-Fox ECB (open cab) and FCB (enclosed cab).” Supposedly an Ahrens-Fox salesman from New Jersey and a bus engineer from Beck designed the chassis based on a Beck Greyhound bus design. Only six were built. Eckart cautions, “Any reference to Greyhound is cloudy as ‘greyhound’ is sometimes used in a generic sense.”

Mack was in and out of the bus business from the early teens until the late 1950s. Mack’s legendary C-Series fire apparatus were based on the Ahrens-Fox/Beck design (photo 4). They look alike. Bear in mind that Ahrens-Fox only contracted with Beck to build apparatus. Mack bought Beck, but Beck never purchased Ahrens-Fox. Eckart continues, “As to exactly how Mack came to use the Ahrens-Fox cab-forward design is a deep mystery. A search of Mack corporate records reveals no mention of this regarding the purchase of Beck. My personal opinion is that this was an ‘arrangement’ between the Fox salesman who helped design it and Mack.”

Approved Fire Equipment was a small apparatus builder located on Long Island, New York, that built several rigs in the late 1950s that looked just like the Ahrens-Fox and Mack cab-forward apparatus. My research into Approved’s history reveals little, although there are some Web site photographs of several of its rigs-mostly from fire departments that own or owned them. According to Eckart, the relationship between Mack, Ahrens-Fox, and Approved is “another area that is deep in mystery.” The general consensus is that the aforementioned Ahrens-Fox salesman who helped design the rig with the Beck engineer became a salesman for Mack when Mack bought Beck. While working for Mack, he also sold the lookalike rigs built by Approved! Eckart reiterates that Beck never purchased Ahrens-Fox-it just built the Foxes on a contract basis. He says, “Since all parties involved are deceased, I do not expect this to ever be resolved definitely.”

Part 2 will address custom cab construction and the differences between custom and commercial cabs.