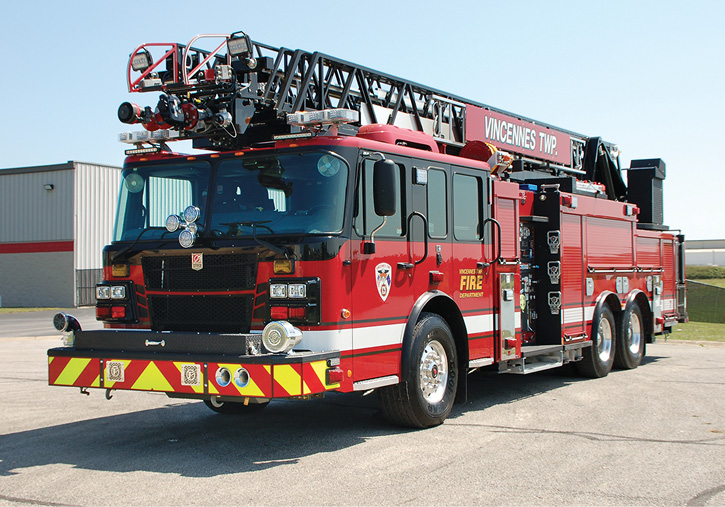 The Vincennes Township (IN) Fire Department is fairly new as far as fire departments go around the country, having been formed in 1961.

However, it is proactive when it comes to apparatus design. “The department tries to replace its apparatus on a 20- to 25-year basis,” states Chief Tim Smith. “The previous ladder that we were replacing was a 1997 model, so it was 22 years old and in the correct time frame.”

The department’s apparatus purchasing committee looked at several manufacturers and went out to bid. Smeal was the low bidder, but it was also the one manufacturer that met all of the department’s specs, according to Smith. “We have dealt with Smeal and Spartan previously with the purchase of a Smeal engine two years ago as well as US Tanker, another Spartan company, for two other vehicles,” he says. “Standardizing kind of made sense for our department as far as training and maintenance of like rigs. So, buying from the same manufacturer was an important decision for us.”

The pump panel setup and the cab configuration inside and out are basically the same as the department’s other Smeal engine. This makes it easier for Vincennes firefighters operating both rigs. “We also deal with Hoosier Fire Equipment, the local Smeal dealer,” adds Smith. “They have also given us great service through the past several years with all of our purchases.”

Smith states that funding for all the department’s equipment comes from its tax base. “We borrow from a local bank and pay the loan back by local tax,” he says. “It makes it easier to deal this way for all of our apparatus purchases.”

The department did incorporate some changes, including the height of the ladder. “We went from a 75-foot ladder to 105-foot ladder,” says Smith. “We needed the reach, not so much the height, with the new ladder. Our response district has a great deal of homes that are set back from the road. The 105-foot ladder gave us a great deal of additional reach.” According to Smith, other design features include a low, ergonomic hosebed; a Class A foam cell; and a swivel front suction. An extended front bumper allows the rig to carry extrication tools up front as well as have a front inlet and hose tray to carry 100 feet of 1¾-inch trash line. 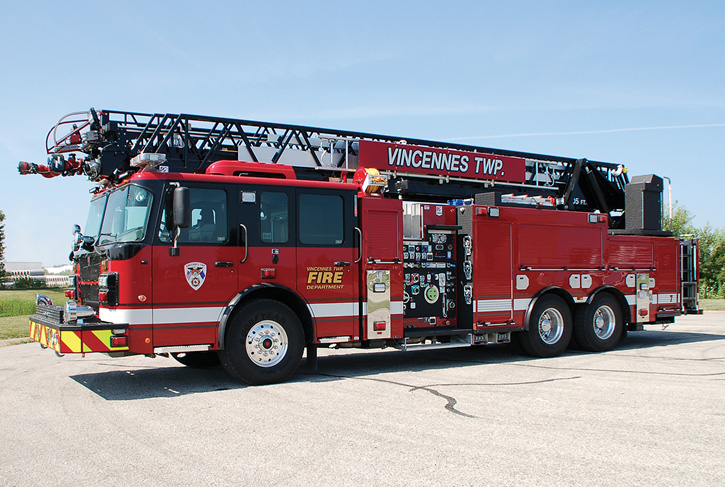 1 The Vincennes Township (IN) Smeal quint. It features a 105-foot Smeal steel ladder, a 2,000-gpm pump, and a 500-gallon tank. (Photos courtesy of Hoosier Fire Equipment.)

“The body was designed with an extra compartment on each side of the rig,” Smith says, “an EMS cabinet in the cab, and a small compartment on each side of the vehicle for turnout gear.” The quint also has two electrical reels carrying 200 feet of cable, one on each side of the body. The department added a second fan, a combi tool for extrication work, rope rescue capability, and the normal complement of engine company and truck company fittings and tools. “The truck was basically designed to mirror the Charlotte (NC) Fire Department quints, which we thought were set up really well and their setup would work in our response area,” says Smith.

The committee that consisted of the chief’s office and company captains did a prebuild conference and a final inspection at the factory. Some changes were made like notching the roof of the cab, enabling the ladder to sit lower. “This change was a significant factor for the vehicle to fit in the station it will respond from,” Smtih says. 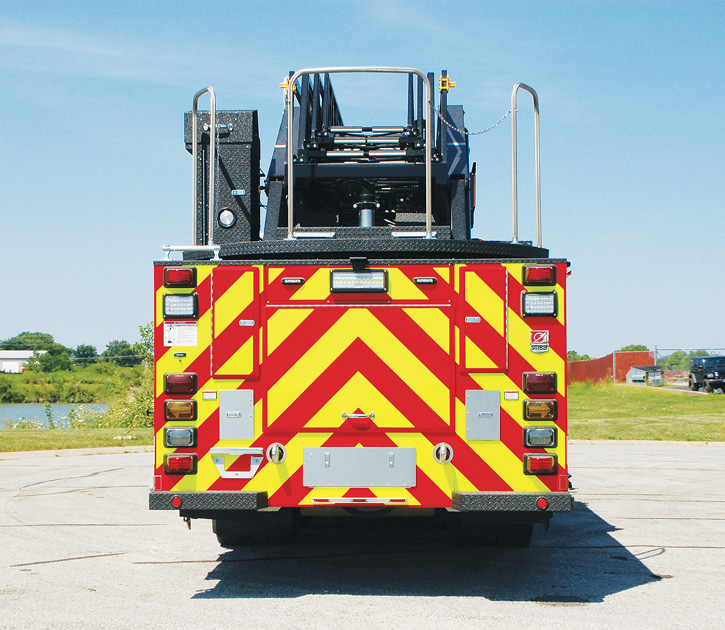 2 The rear of the truck with a compartment for a slide-out ergonomic hosebed. 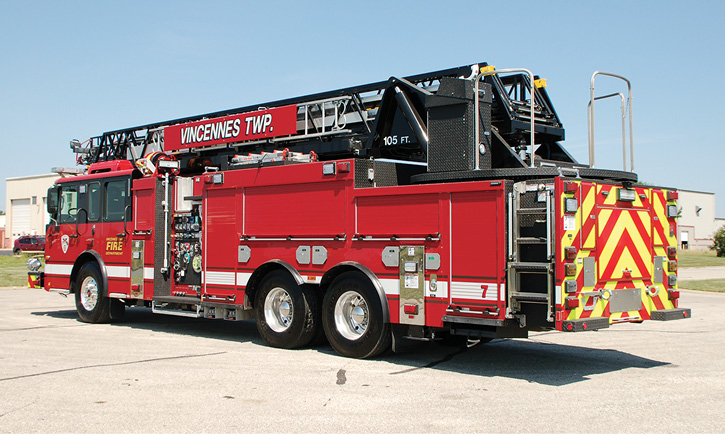 3 The driver’s side showing large compartments and pump panel.

The hose-carrying capacity of the vehicle is 800 feet of five-inch large-diamater hose, 400 feet of 2½-inch, two crosslays with 200 feet of 1¾-inch, one crosslay with 200 feet of 2½-inch, and the front trash line with 100 feet of 1¾-inch. There is also a TFT Blitzfire™ nozzle in the rear and an Elkhart ground-mounted nozzle. The pedestal on the body allows firefighters to operate in water tower mode or in rescue mode, and the platform basket has twin automatic nozzles mounted. “Also added was a battery-powered AMKUS rescue tool to be carried for extrication work,” says Smith. “The tool is lighter and smaller than previous tools we operated in the past.”

The quint will respond first due on all commercial structure fires and second due on all residential alarms. “Manning is one driver from the station and volunteers responding to the scene from home,” says Smith.

4 The front of the truck with swivel front suction and rescue tool compartment.

The Vincennes Township Fire Department designed a highly functional quint to operate in its response district. It followed its apparatus replacement program, and the committee worked within its budget to get what it wanted out of a vehicle that would be able to operate well into the future. The department updated from its older quint, enabling it to gain better reach for dwellings in its response area as well as more compartment space for future expansion.

The committee’s thought process worked well. Not only were they able to plan accordingly, but they also thought about the safety of their firefighters in designing an ergonomic hosebed and separate turnout gear compartments outside of the cab.