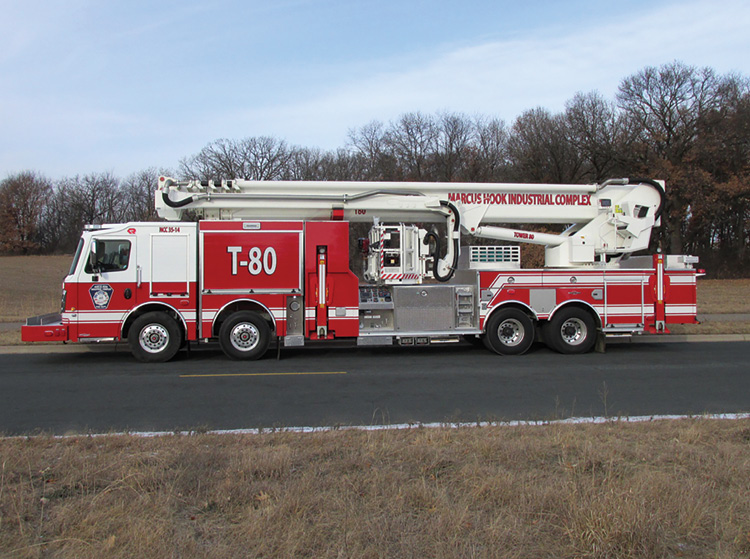 The Sunoco Marcus Hook Refinery, in Marcus Hook, Pennsylvania, was one of the largest crude oil processing plants in the United States until 2013.

The plant was purchased by Energy Transfer Partners, a Dallas-based pipeline company, which converted the plant for the storage of butane, propane, and ethane. Fracking in Pennsylvania brings the product by pipeline to the facility where it is stored in refrigerated tanks and then transferred to tanker ships docked at the plant and transported domestically and internationally.

After doing a global fire protection study, William Kelly, the senior manager of emergency services at the plant, says, “A decision was made to acquire an aerial device. Our tanks are 165 to 170 feet in height, and the main working parts for the operation of the tanks are on top. Our employees have to operate at this height to make repairs. We had to find a way to remove them in case of an emergency without climbing or using ropes.”

During the planning to repurpose the Marcus Hook facility from an active refinery into a hub, an analysis was conducted to identify potential fire suppression requirements. Multiple fixed and mobile components were identified, including a specialized fire/rescue response capability. Specifically, this need was for an apparatus that could not only provide mobile fire pumping capacity but also perform water delivery from an elevated platform along with assisting in any rescue from structures including the refrigerated storage tanks.

The primary function of the aerial platform is equally shared between rescue of injured or ill persons from the top of the tanks or other elevated structures within the process area and the application of water to fires in elevated areas that may be outside of the reach of the plant’s fire brigade’s primary apparatus. In addition to these important functions, the unit needs to be in service within minutes and with minimal staffing. “Since we didn’t have to go out to bid because of our unique requirements, Rosenbauer built the highest platform in the U.S. for our demands,” says Kelly. “Thus, we acquired the Rosenbauer T-Rex articulating platform. The Rosenbauer chassis and cab are American products manufactured in Minnesota, while the aerial device is a German design. Some of the platform installation was completed in Italy, but all of the complex design and installation were under the supervision of trained Rosenbauer technicians.”

THE AERIAL AND PLATFORM

The aerial components include five telescoping sections and one final section that articulates. This allows for the unit to operate at 22 feet below grade and 180 feet above. Not only can the platform pivot over 90 degrees, it has a 1,400-pound capacity and can deliver 1,500 gallons per minute (gpm) of water at any operating range. The unit monitors ice and wind conditions and can operate in wind speeds of 39 miles per hour. The aerial is operated by a rear-seated turntable position or within the platform.

The outriggers can be deployed in as little as 60 seconds. This is completed by a joystick located at the rear of the vehicle. The automatic leveling is not challenged by grade of slope whether side to side, front to rear, or both.

The T-Rex’s intuitive controls from just two joysticks allow the operator to focus on the task at hand. It will automatically stow the aerial back to the travel position with the touch of a button. The platform design allows the operator to deploy directly from the platform without the use of the aerial command seat at the turntable. The platform is equipped with impact protection with sensors on the front, sides, and bottom. The system will stop the aerial when it comes within 18 inches of a collision. The operator must acknowledge the obstacle and then can trim in against the intended target. The target control system can navigate the travel path in an identical repetitive operation in either direction when required.

2 The aerial’s first section extended with the platform on the ground. (Photos 2-4 courtesy of the Marcus Hook Industrial Complex.)

3 The T-Rex’s outriggers at full extension on the officer’s side.

4 The aerial’s boom at full extension.

The T-Rex has a 1,500-gpm pump that can supply the waterway to the platform, allowing for the use of the monitor nozzle or a hoseline if necessary. The platform is equipped with spray nozzles around the perimeter to protect against intense heat. These can be operated manually or programmed to a set temperature. The T-Rex also has preconnected crosslays. These are designed for rapid deployment and are close to the ground in the front bumper. This position helps in the deployment and is also more ergonomic for reloading.

The T-Rex comes with storage compartments, allowing the equipment normally expected for high-angle rescue to be immediately available on scene if necessary. The platform is designed with stretcher support in mind. The front of the platform can open up and allow a Stokes rescue stretcher to be secured to the floor. This allows rescue staff to concentrate on victim care. This ability may also avoid any need to manually lower victims by ropes.

“The T-Rex’s reach and height exceeds any others on the East Coast, but it is something you hope that you never really use other than in training,” says Kelly. “It is certainly a valuable addition to the toolbox of the Marcus Hook Industrial Complex’s fire department. It is identified with our mutual-aid partners as Tower 80 in Delaware County, Pennsylvania, and Tower 35-14 with our New Castle County, Delaware, community.”

The vehicle is equipped with standard axes and forcible entry tools as well as ropes and rigging equipment, confined space equipment, portable lighting, and a 10-kW generator. Kelly adds, “What’s really nice is the quick operation. One-button operation self-levels the vehicle. It auto levels in 60 seconds.”

The apparatus has double front steerable axles for height and weight. “We visited the factory four times during the building process and were really impressed with the whole Rosenbauer team and our local dealer DPC Emergency Equipment,” says Kelly. “DPC also mounted all of the tools for us at its facility.”

The term target hazard takes on a new meaning for the members of the Energy Transfer Partners Fire Brigade at the Marcus Hook facility. After doing a needs assessment for fire protection, the company decided on purchasing an aerial device to meet its unique needs—for firefighting capabilities and also for the safety of employees. It came up with a unique, one-of-a-kind unit in the United States that will operate at a height of 180 feet. Even though the facility had unique needs, it planned ahead for those needs in the future, thought out of the box, and now has a well-thought-out piece of fire apparatus to operate now and well into the future.