The Langley Township (BC) Fire Department, located in the Metro Vancouver area, serves a population of 121,727 spread across 122 square miles and protects various residential, commercial, and light and heavy industrial occupancies in urban, suburban, and rural areas. There are also new developments going up all over the response district.

The department also specializes in animal rescue. There are a lot of horse and cattle farms in the district. A few times yearly, the cattle and horses get stuck in ponds and ditches. The general categories of emergency response for the department include fire suppression, medical aid, motor vehicle incidents, and special operations (confined space rescue, large animal rescue, and airport rescue). 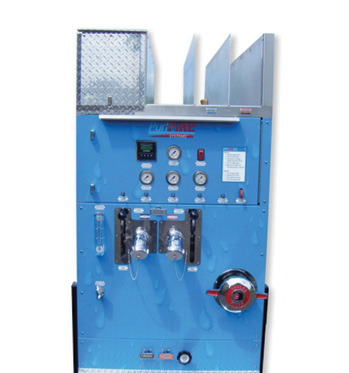 2 The puriFire pump panel on the officer’s side of vehicle.

Recent ordinances in Canada make local fire departments responsible for providing drinking water to the public should a natural disaster occur. The fire department is located in an earthquake zone, so the possibility of a major power loss is a major concern. It could disrupt the area’s water purification systems that provide clean drinking water to residents.

“The department decided to take a proactive stance in disaster preparedness,” according to Assistant Chief Monty Armstrong. “We formulated a small truck committee to go over what we wanted to do and to write up specs. When this was done, we sent out a request for proposals. The department had a 25-year vehicle replacement program for our apparatus. We would like to get it down lower but have to work within our budget. Around 20 years ago, we purchased seven American LaFrance tenders that were due to be replaced at this time. Our committee decided to go with a simple design, which was a commercial chassis with a [five-person] cab, which saved us a great deal of money. Larger water tanks on the vehicles were spec’d since we have a large rural area with no public water supply in the South Langley area. In addition, we decided to install a water purification system.”

The 4S10F puriFire System is designed to supply drinking water from fresh water sources contaminated by natural or man-made disasters. The system is a compact, self-contained, fire-pump-driven, water purification system that uses advanced filtration and a chemical-free disinfection technology system.

It has a dedicated control panel on the officer’s side of the vehicle. The system can be set up by one operator and provide 600 gallons of water per hour of drinking water within five minutes of deployment.

4 The driver’s side with standard firefighting pump panel and high side compartments.

The truck committee decided to go with Darley’s puriFire System to be able to provide purified water in the event of a water supply shutdown during a disaster. Also in the specs were higher horsepower (hp) engines so the rigs could be driven up hills faster. The weight was also kept down on the pumpers. “We worked with Darley on the pump and water system and also with Spartan ER, which provided the Freightliner chassis, mounted the pump modules, and did the body work on all of the vehicles,” Armstrong adds.

All seven pumpers were designed exactly the same for ease of driving, training, and maintenance. The tools on the vehicles are also standardized. “Right now, we have the basic engine company tools and fittings,” says Armstrong. “In the future, we might incorporate battery-powered extrication tools. Highway 1 is a major thoroughfare going through the area. We tend to operate at a great deal of auto accidents and have to perform extrication work on this main artery.”

The engines can also be used to respond first due for a fire or to transport water to a scene depending on the need of an incident commander. Another area of concern, according to Armstrong, was to use the purification system for cleaning and decontaminating personal protective equipment (PPE) for firefighters after a fire and also to clean tools. The engines carry 1,000 feet of four-inch large-diameter hose; two crosslays of 1¾-inch, 150 feet each; 1,500 feet of 2½-inch hose; and an Akron Deck Gun. The use of these seven pumpers is still evolving.

“Working with Darley, Spartan ER, and the local dealer Safetek Emergency Vehicles was great. They worked with us to give us a great design,” adds Armstrong. “They addressed all of our questions and concerns when the vehicles were being constructed.”

Here you have a fire department that had a unique need for its response district. Not only would it need to design seven engines for firefighting, but it also had to consider the loss of power and water in an earthquake-prone area. Designing a vehicle for a twofold purpose is no easy task. The department was proactive in thinking when it designed these vehicles.

It now has highly functional pumpers that can be used for firefighting and PPE decontamination and also for disaster response. The pumpers were also designed for standardization, which makes it easier for driver training, operation at an emergency scene, tools onboard, and ease of maintenance.

BOB VACCARO has more than 40 years of fire service experience. He is a former chief of the Deerpark (NY) Fire Department. Vaccaro has also worked for the Insurance Services Office, the New York Fire Patrol, and several major commercial insurance companies as a senior loss-control consultant. He is a life member of the IAFC.