The Manhasset-Lakeville (NY) Fire Department has one of the largest fire districts on Long Island. It covers 10 square miles and has a residential population of more than 44,000, with more than three times that amount during the workweek.

It has a large inventory of fire apparatus that responds out of five stations. Apparatus purchases keep the fire district busy, having replaced several ladders, pumpers, and ambulances over the past several years. “The latest apparatus due to be replaced was a heavy rescue going to Company 3,” states Kyle Dugger, assistant superintendent of the Manhasset-Lakeville Fire District. “We began the spec-writing process about 11⁄2 years ago. We try to go with a 20-year plan for our engines and 15 years with our ladders. Like most other fire districts, we also look at maintenance issues and, of course, our budget.” 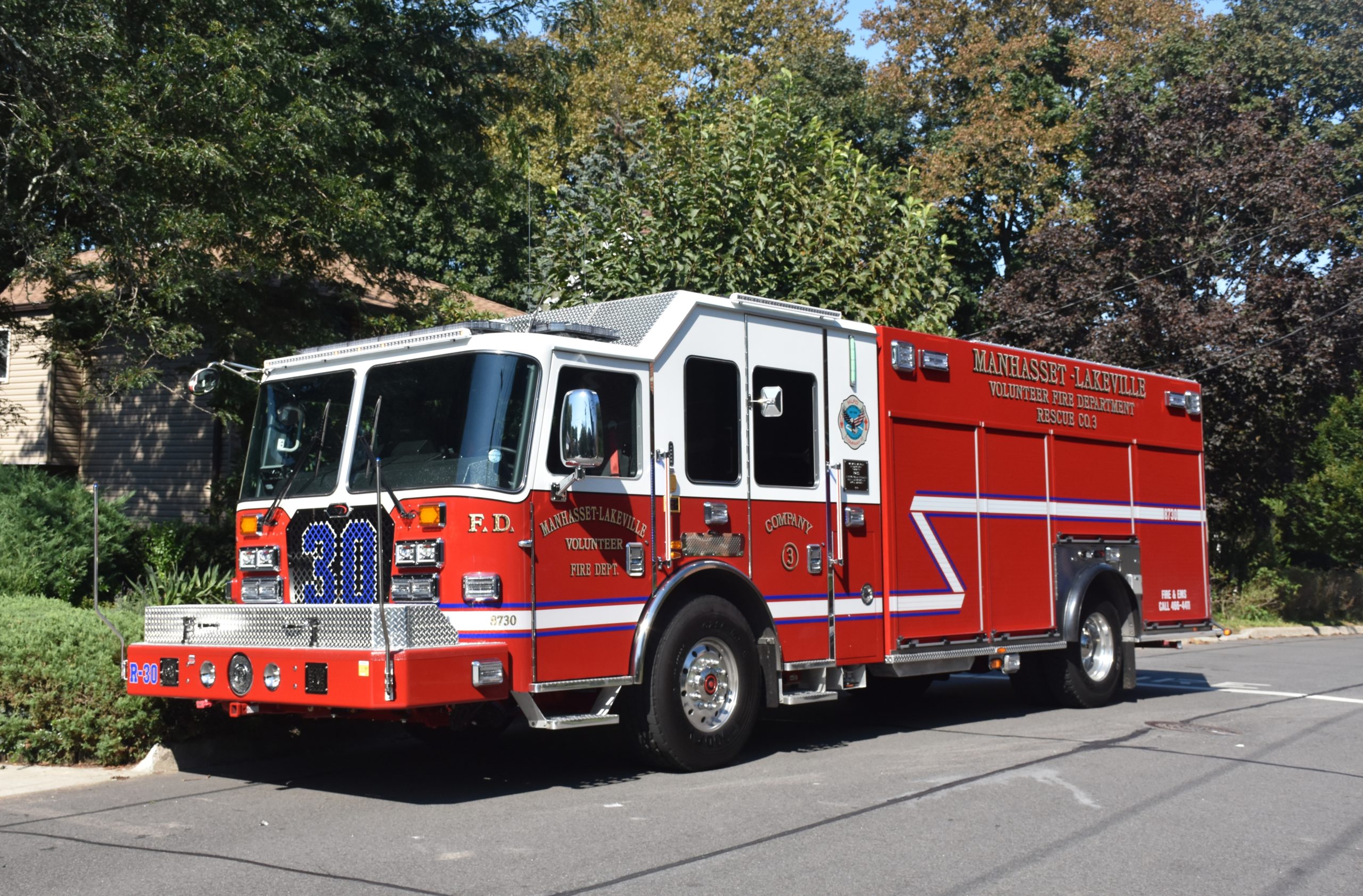 “The district has had a wide variety of rescue trucs through the years,” continues Dugger, “from our first rescue in 1957 to our current purchase. Our committee basically tried to mirror a rescue truck purchase we had back in 2011 that went to Company 5. It was a different manufacturer, but the body configuration was kept the same with some minor changes.”

The last rescue operated by Company 3 was a walk-in with no pump. Previously, it always operated a walk-around body configuration, according to Dugger. “For this purchase, we decided to go back to that concept. Also, we felt a rescue-pumper was the way to go this time around. Doing more with less is probably the norm in the fire service all over the country. Our new members also had little to no driving experience for the most part. Purchasing a smaller, more maneuverable vehicle for some of our tight streets here in the community was also the way to go. Our other rescue-pumper located at Company 5 could work in conjunction with this new piece as well.”

The main difference between this new unit and the department’s older unit is that it has more compartment space, has a transverse compartment, and has coffin compartments on the top of the vehicle that also provide additional space. The truck committee also designed a through-the-body ladder compartment; a flat water tank, which also provides more space; a “speedy dry” chute built in; and a front trash line that carries 150 feet of 1¾-inch hose. The tradeoff was a higher hosebed.

“Also, like Company 5’s rig, we specified an officer’s side pump panel,” says Dugger. “We operate on the Long Island Expressway and Northern State Parkway sometimes and wanted to keep our chauffeurs out of harm’s way when operating at a scene.”

Three manufacturers bid on the unit. KME was eventually chosen. The department had dealt with KME several times in the past, and it had a good dealer service facility on Long Island. “They were great to deal with,” adds Dugger. “The factory, which we visited several times, was only a three- to four-hour drive, which made it convenient for our members to visit to see the construction and, if necessary, make any corrections or additions.” 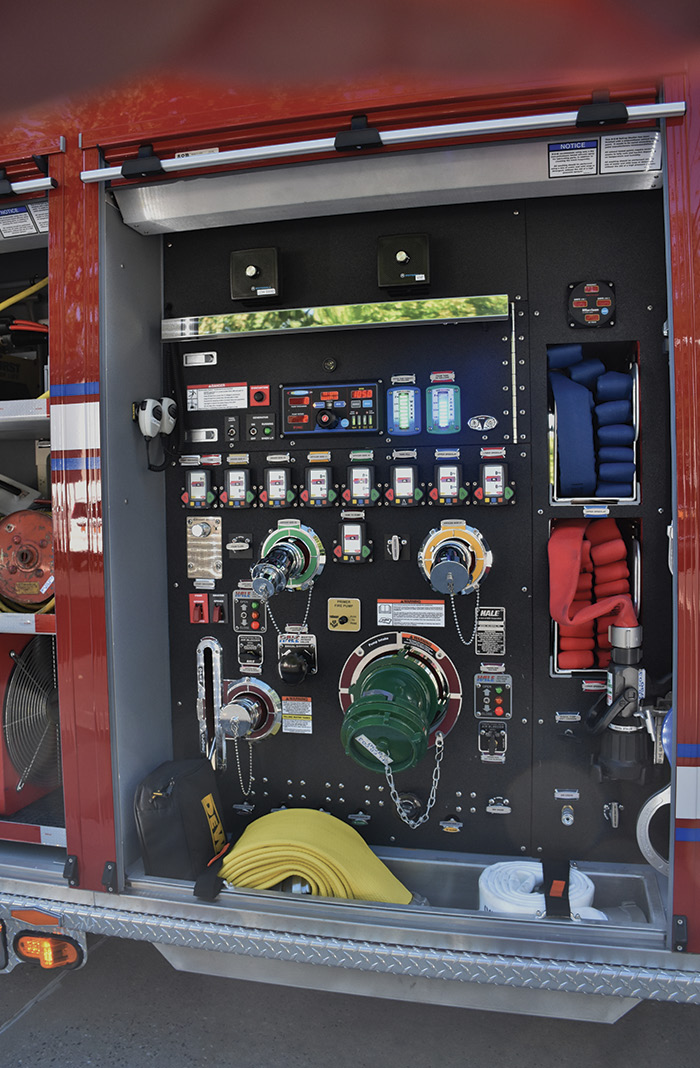 2 The officer’s side pump panel is designed for chauffeurs’ safety, keeping them off the roadway at an emergency scene. 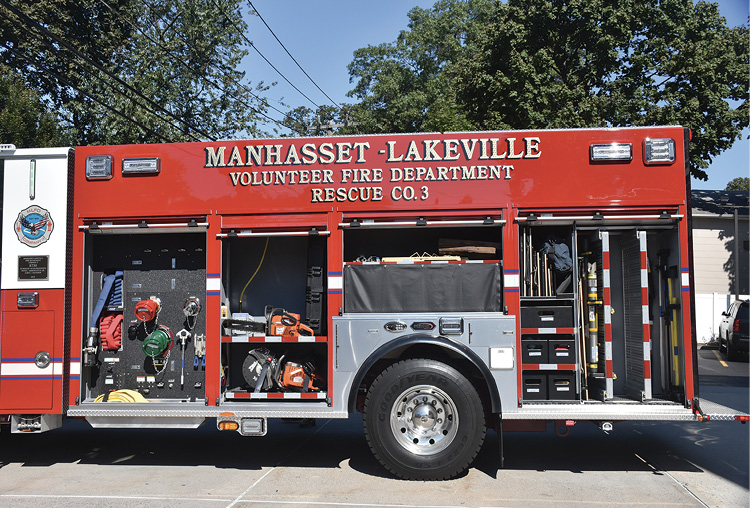 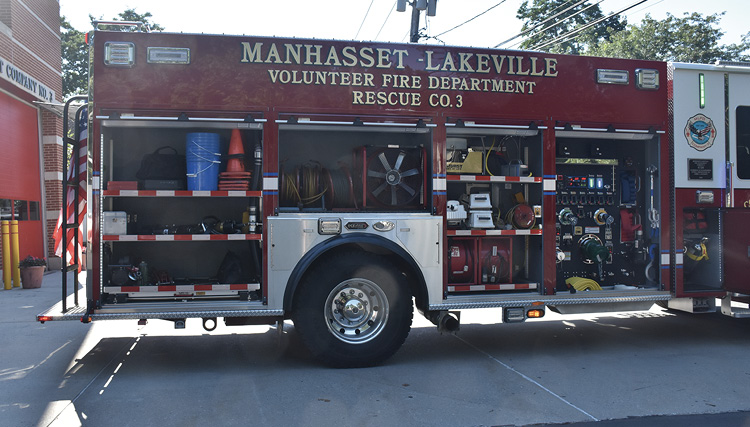 4 The officer’s side compartments and pump panel are shown here. The compartments carry fans, electrical reels, and flood lighting.

The vehicle has two 1¾-inch crosslays and 200 feet of 1¾-inch lines, 400 feet of 2½-inch attack line, and 800 feet of five-inch supply line in the rear. The front bumper houses a hydraulic O-cutter and spreader. The compartment built into the cab holds a hydraulic ram and Paladin tool. This compartment also holds a HURST eDRAULIC O-cutter, spreader, and ram and the company’s DeWalt tools and portable winch.

At the rear of the vehicle, one compartment houses a portable power unit for extrication tools with portable reels. Ladders, pike poles, a Little Giant ladder, and FAST team Stokes basket and backboards are carried above this compartment.

The MLFD solved several problems with this new apparatus purchase. It downsized from the previous vehicle, making it more maneuverable on some of the tight streets it has in town and making it easier to drive for its younger members with limited emergency vehicle driving experience. It gained compartment space and has room to grow. By making it a rescue-pumper, the limited staffing problem that has been plaguing many fire departments has been solved. It now can have a rescue truck and pumper on the scene in one unit.

All it takes is a thought process that may have you think out of the box. Again, think about your target hazards in your response district as well as your neighboring communities. With more automatic mutual aid being called around the country, especially for RIT, you might want take this into consideration for the type of added equipment you might need to carry. In any case, don’t overload the vehicle. National Fire Protection Association 1901, Standard for Automotive Fire Apparatus, has a great section in its annex where you can plan out compartment by compartment and see the weight of just about any type of tool you want to carry. Work with the manufacturer’s engineers to see that the vehicle does not exceed its gross vehicle weight rating.

The department thought proactively through all of this and now has a new functional rescue-pumper that will last it well into the future.