Part 1 (May 2018) discussed how options exist for fire departments to get big flows with existing pumpers in their fleets—specifically out of pumpers with 1,250- or 1,500-gallon-per-minute (gpm) pumps.

SETTING UP THE PUMPER

I believe there is a place for this type of unit for a city department with some modifications in the unit itself as well as the water delivery operations required to support it. Let’s take a look at how this can be done.

I would make this unit capable of running as a regular engine company assigned to its own station and district with the few modifications previously mentioned to make it a high-flow pumper. The super pumper should have at least a 1,250- to 1,500-gpm pump.

Both sizes of hose will work in a 3,000-gpm evolution; however, with four-inch hose, you basically have to work twice as hard. Two four-inch lines equal approximately one five-inch line hydraulically. Other than that, the unit can be designed and equipped as a standard engine company to run the standard calls.

If there is a big fire that requires this unit to go into the high-volume mode, it can be special called for the incident if not already assigned. As mentioned above, the unit would need multiple supply lines to develop a 3,000-gpm stream. If five-inch hose is used, I recommend a minimum of three supply line evolutions from three separate hydrants set up in a relay pump operation no matter how close or far away the hydrant may be from the super pumper. We attempted four flow tests using two hydrants, five-inch hose, and two pumpers. Basically, we could not get enough water from the hydrants and we ran out of throttle. The third pumper with a third hydrant made a difference. The extra pump reduced the overall revolutions per minute (rpm) for the other two engines, making the operation more efficient and doable.

If the hose being used is five-inch, most likely three hydrants would also be needed, with two of them set up in a dual four-inch relay line and one in a single relay operation. If single supply lines are used instead of duals, plan on using up to five hydrants because of the extra friction loss in the supply hose. The super pumper operation itself would probably qualify for an extra alarm just to set it up, so it may need to be put in as a special callout procedure if the super pumper is needed. The pumpers hooking up to the hydrants for the relay operation should hook up a minimum of two soft suctions to get maximum flow from the hydrant, and both of them should be large-diameter hose (LDH). The 2½-inch port on the hydrant can be adapted to LDH to connect to the intake of the engine. In fact, if you think the hydrant is strong enough, I would go ahead and make a three-line hookup to the hydrant for maximum flow if the unit is equipped for three lines.

It’s very important to know your hydrant systems and what they are capable of. This should include the grid system and the size of the mains for the hydrant you might choose. A water main map is a must for this type of operation.

Finally, when using a master stream, the stream itself needs to be moving to cover the entire fire area it is responsible for. Just setting up a master stream and leaving it in one position does nothing more than drill a hole right through the building. This tends to happen a lot on master stream fires.

SETTING UP THE OPERATION

Setting up the operation takes some training but is rather simple. When the order is given to set up the super pumper, there needs to be a predesignated team that will go into action. This can be set up in staging with the standard pumpers. All units are told to reverse out from the super pumper and go to their designated hydrants. Each unit relay pumping should take one firefighter to assist in locating the hydrant because you might be looking for a specific one that will provide adequate performance for the operation. It would be a good idea for the pump operator on the super pumper to mark each supply line from the pumpers that they belong to for communication reasons.

The pump operator of the super pumper is in charge of the operation. The order should be given for all relays to be charged under idle pressure. Once all lines are charged, the order can then be given for the pumpers to throttle up. I would start the operation at about 150 pounds per square inch (psi), keeping the super pumper at idle, and check to see where the super pumper is at regarding the flow. If the required flow is close, the super pumper would simply throttle up to make the difference for reaching the target pump discharge pressure. The goal is to reach the required flow efficiently. In this case, efficiency means an rpm that is not extremely high—1,700 to 1,800 rpm on all units would be good. The maximum operating pressure of the hose should never be surpassed. Most LDH has an operating pressure of 185 psi; however, there is LDH attack hose that can go up to 250 pounds per square inch (psi). Remember, the goal of this operation is twofold. You are trying to reach the desired flow while keeping all pumpers at an efficient rpm/pressure, so adjustments may be needed.

On August 25, 2017, Fire Flow Technology with the assistance of the Bullhead (AZ) Fire Department conducted a series of flow tests to attempt to get a maximum flow of 3,000 gpm from our “big water unit” using a four-inch Stang master stream with a 3¼-inch smooth bore tip. The big water unit itself is a 2005 Ford 250 XL that weighs 3,800 pounds. A set of outriggers was fabricated with a capacity of 5,000 pounds and mounted in the truck trailer hitch receiver.

We did the tests in a commercial area using three hot hydrants that started with a static pressure of 120 psi and after flowing 3,000 gpm had a residual pressure of 30 psi. Three engines were used, and each had its own hydrant from which they double tapped with five- and three-inch hose.

Originally the engine that pumped the big water unit was to pump dual five-inch lines. The evolution had to be changed because the engine did not have enough LDH intakes to receive water from the water supply engines. So, the plan was changed to allow two engines to pump to the big water unit: the original one next to it and the engine 500 feet away sitting on another hydrant north of the simulated fireground.

Also keep in mind that even though the stream went 200 feet, in reality the target will probably be half of that. Think of the power of that stream at the halfway point.

Apply the emergency brake and use wheel chocks. I also do not recommend flows higher than 2,000 gpm unless otherwise proven to be safe by all manufacturers involved with the project. A quick-attack unit is commonly used with refinery fire departments, so consulting with them would also be highly beneficial. In fact, you may want to give the Chicago (IL) Fire Department a call.

There is only one way to support the quick-attack unit flow of 3,000 gpm. It has the same basic principles for the water delivery evolution that the super pumper applies with one exception. The receiving pumper will be supplying the quick-attack unit, and it only has to be a standard pumper, not a super pumper. This pumper needs to use the high-pressure five-inch attack hose.

HOW MANY PUMPERS SHOULD BE PLACED IN A RELAY?

The main goal to strive for when placing pumpers in a relay is to be able to move the required amount of water in the most efficient manner possible. Efficiency, in this case, means using the least number of pumpers as possible.

In large-flow relays, the hose becomes a restricting factor regarding the amount of water that can be delivered because of the maximum allowed operating pressure (mainly 185 psi with LDH supply hose) and the length of the hoselay itself. As a rule of thumb, whenever the flow is doubled, the pressure required to move it is quadrupled. This higher pressure equates to more friction loss in the hose, which in turn has a direct effect on how long the lay can be between pumpers.

A flow chart like Chart 1 can be designed to show flows and lengths of the line that will assist in properly placing the correct number of pumpers in the relay. Our goal is 1,500 gpm per relay. Red fonts on the chart denote 1,500 gpm.

A lesser alternative to this project could be to order new engines each with a 2,000-gpm gun. It only makes sense. A 2,000-gpm flow would not require the dual intake valves; however, more than likely a relay or two supply lines will be needed to obtain the 2,000-gpm flow. 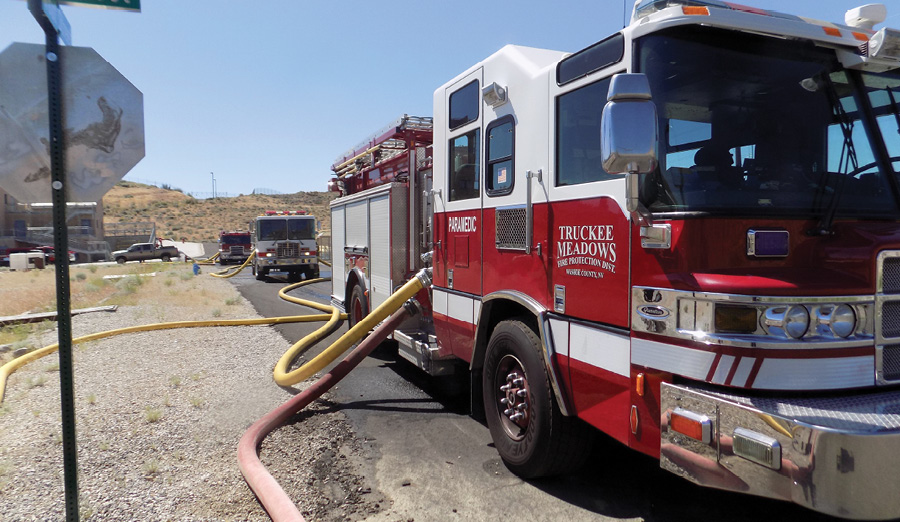 2 This was initially a two-pumper operation to move the required water but the rpm was too high. Three engines put in tandem relieve the work of the pumpers involved in the operation by adding the third engine just to help the workload of the initial two that were used. Of course, if another hydrant was available, this engine could have pumped from there and accomplished the same thing. 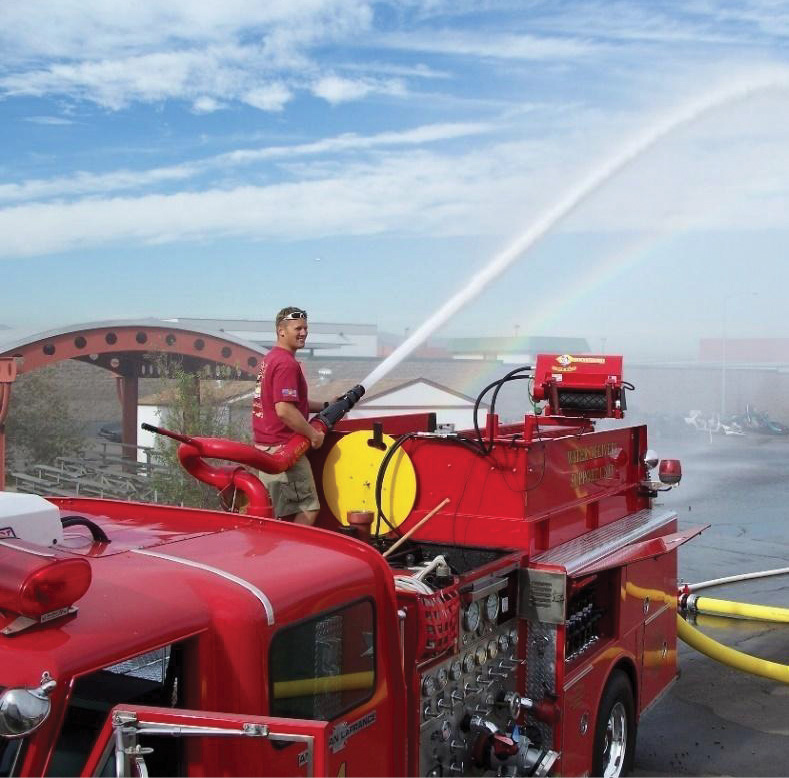 The bottom line is that the fire service has gotten away from flowing the big water. One reason is probably the lack of understanding of LDH. You have to do more than just connect it to the hydrant. The operation in this section is really nothing new. The Fire Department of New York and others have used a similar concept for years. We’ve just gotten away from it. The economy super pumper concept is a way to get back into the water business for just a small investment and has the potential to save millions of dollars in property loss.

Fire departments are there for our protection and should be able to handle any fire that our community can experience to the best of their ability. I know this is a huge responsibility and sometimes not totally achievable. Large-flow fires, as rare as they are, in most communities can and do happen. For a small investment, the two units covered in these articles can provide assistance in developing an overwhelming fire stream as compared to the standard master stream flows we are used to and provide a big knockdown and still operate on an everyday basis for the everyday responses.

PAUL SHAPIRO is director of Fire Flow Technology. He is a nationally recognized instructor on large-flow water delivery. He is also a retired engineer from the Las Vegas (NV) Fire Department. He has authored numerous articles for fire trade magazines. He has been in the fire service since 1981, is author of Layin’ the Big Lines, and produced the first in a series of videos on large-flow water delivery.