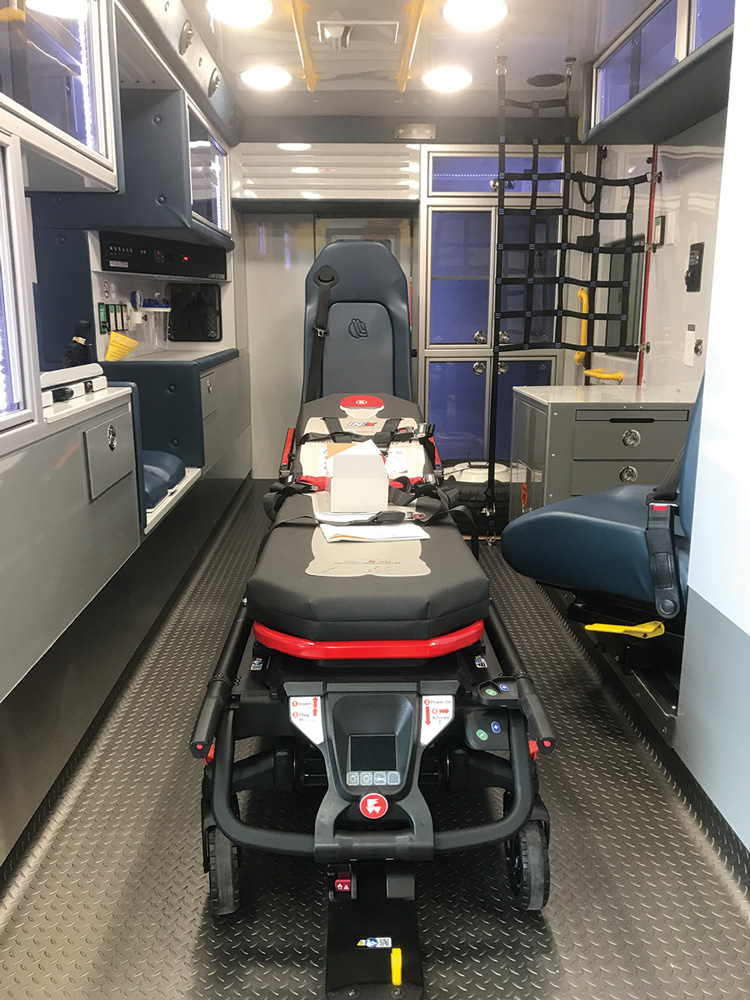 Standardized lines of ambulance models continue to see strong customer support, but most manufacturers also are altering their designs to accommodate specific requests from end users.

Ambulance designs are changing to reflect not only safety concerns from customers but also specific requirements for equipment placement. 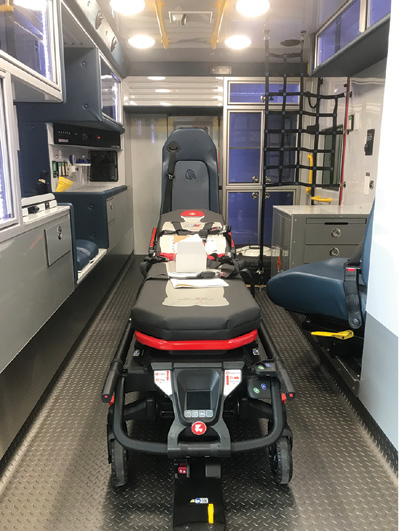 Steve Rowland, regional sales manager for USA South at Demers Ambulances USA Inc., says that many of the design changes on Demers ambulances involve mobility seating within the patient module. “We are seeing more and more departments go to a captain’s chair on a sliding and rotating track on the curb side of the module where they can treat a patient,” Rowland says. “We are seeing more of them replacing the squad bench, although the industry probably will never fully get away from the traditional squad bench.”

If a second patient needs to be transported in an ambulance with a curbside captain’s chair, Rowland says the design can accommodate such a situation. “That curbside mobility seat back folds forward, and the medics can quickly screw two panels into the module’s wall to support a backboard for a second patient,” he says. 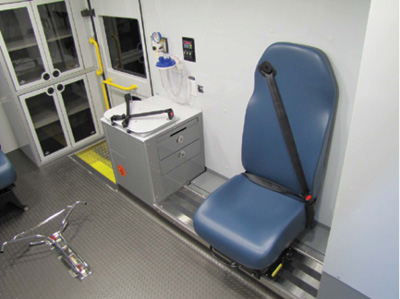 2 The curbside captain’s chair in this Demers ambulance can be rotated 180 degrees and faces forward during transport but can face 45 or 90 degrees toward the cot to treat a patient.

Rowland notes that when using a captain’s chair, it is much easier for a medic to treat a patient while seated and buckled up in a harness. “The captain’s chair can rotate forward for a long transport and has a total of 180 degrees of rotation,” he points out. “However, typically it is forward-facing, at a 45-degree angle toward the head of the cot or at a 90-degree angle to the cot.” 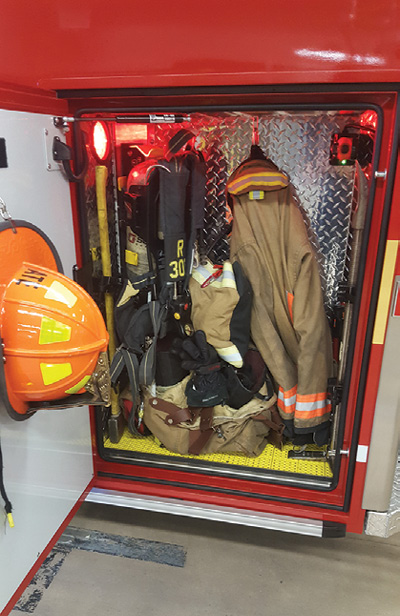 3 Demers has installed sealed PPE compartments on some ambulances staffed by firefighters to hold their PPE securely and apart from the cab and patient module interior to prevent contamination.

The captain’s chair usually is located at the midpoint of the cot on the right side, he adds, and will have a medical cabinet, defibrillator, and monitor mounted nearby. “It’s important to give the medics the tools they need that are nearby and reachable so they can treat the patient but while still buckled into the seat,” Rowland observes. He notes that in most patient transport situations, the primary care position is usually at the curbside seat, while the captain’s chair position at the head of the cot most often is committed to maintaining an airway on the patient.

Chad Newsome, national sales manager for PL Custom Emergency Vehicles, says that in terms of ambulance design for safety, “we want to keep butts in the seats. We have the Medic In Mind system, where the person working with the patient is able to stay seated and belted in and yet can still reach all of the equipment needed to treat the patient.” Newsome adds that the design of PL Custom’s ambulances include radiused strike points in all of its modules to prevent injuries. “All strike points on our Corian-type countertops are cut at 45-degree angles,” he says, “and all seats with swivel bases have six-point harnesses.” 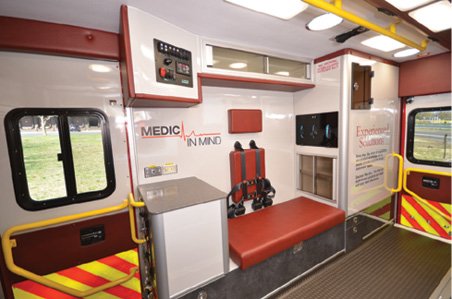 Chad Brown, vice president of sales and marketing for Braun Industries Inc., notes that Braun designs its seating configurations and seat belt restraint systems with ergonomics of the medics in mind. “We usually place heavy-use items beside the seating instead of in the overheads,” he says. “We’ve done ride-alongs with customers to visualize where and how they use their equipment and make suggestions on where they could be located in the module. Cabinets, cot retention, and seat belt restraint systems testing has been a big focus for us in the past 24 months.”

Braun also has been seeing a move away from the squad bench by ambulance customers, Brown points out. “They are moving to the captain’s chair that swivels and slides forward and backward at the side of the cot,” he says. “When they are transporting, the chair is in a forward-facing position, and the medic is in a four-point harness.” However, Brown notes, there continues to be a need for the squad bench, especially in more rural areas of the country where a long ride to a hospital might require the ambulance to carry a second patient. “It’s still 50/50, captain’s chair to squad bench right now,” he observes.

Dave Seitsinger, regional sales manager for Life Line Emergency Vehicles, says his company specializes in out-of-the-ordinary Type 1, Type 3, and neonatal ambulance units. He notes Life Line uses the It Means Safety (IMS) design on the inside of the module, installing either two individual captain’s chairs or one captain’s chair and a squad bench. “Usually we’ll have all the equipment either at the head or the foot of the cot,” Seitsinger points out.

For those departments that choose a captain’s chair on the curbside of the module but need to transport a second patient, Seitsinger says, “A lot of individual seats turn and face forward, then fold down so they could accept a backboard for a second patient.” He adds that Life Line’s captain’s chairs and squad benches are fitted with four-point seat belts.

Tommy Pugh, national sales manager for Excellance Inc., says lap belts in the back of ambulances “are a thing of the past, and multipoint harnesses are the prevailing theme. And, bucket seating is much more prevalent today as opposed to bench seating,” he adds.

Matt Minerd, segment marketing manager for fire and emergency at REV Group, says REV Group has partnered with Ferno (maker of ambulance cots and stair chairs) to develop a new ambulance design called REV FLEX. “REV FLEX takes our ambulance design and couples it with Intraxx, an in-track interior mounting system that essentially removes the interior cabinets out of the ambulance and replaces them with a series of tracks that can be moved to hold equipment and cabinet mounts,” Minerd says.

He points out the system “gives EMS crews the ability to quickly change the function of the ambulance based on the kind of call they are responding to. They are able to move the equipment around at any time, including oxygen mounts, defibrillator wall mounts, and tablet mounts. And, Ferno developed Safe Pack, which gives quick access to a series of pouches holding supplies.”

Minerd notes that REV FLEX is currently available on REV Group’s AEV, Wheeled Coach, McCoy Miller, and Leader brands. “The system allows the entire ambulance to be emptied in minutes so it can be cleaned more effectively than if it had traditional cabinets,” Minerd says. “We use an extruded reinforced body on our modules, so we don’t need cabinets to reinforce the vehicle’s body. In addition, we are working on a hybrid system that has tracks only on one side of the box for those customers who desire that configuration.”

Chad Brown from Braun says the company also has been focusing on safety. “We weld our entire truck and don’t use any glues, tapes, or extrusions,” Brown points out. “Instead of an extruded aluminum construction, we create a unitized body for a stronger box that can absorb energy if an accident happens instead of transferring that energy. The entire design idea is to protect the patient and crew area.” 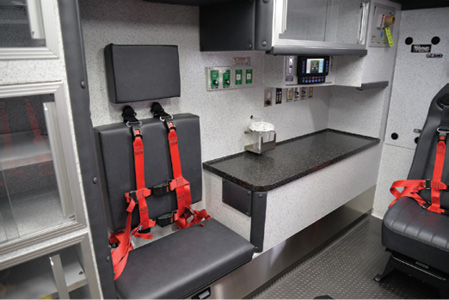 5 Rounded countertop corners and 45-degree angles on overhead cabinets are designed into Braun Industries ambulances to improve medic and patient safety inside the ambulance module. (Photos 5 and 6 courtesy of Braun Industries Inc.)

The newest design feature in Life Line’s rigs is the multiplexed Elite G3 system, Seitsinger says. “There are multiple touch screens in the patient compartment and in the driver’s area,” he says. “The driver can pull up what’s happening in the rear compartment and can even control the system from up front. There’s also a switching system on the side door of the vehicle if you want exterior controls.” 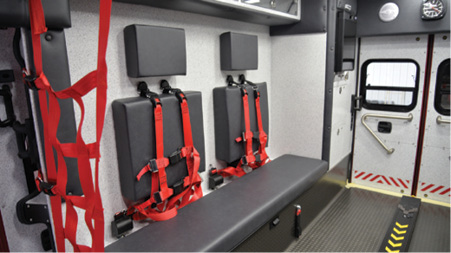 6 Braun Ambulances has found that half of its ambulance customers continue to require a squad bench in their rigs as opposed to a captain’s chair. 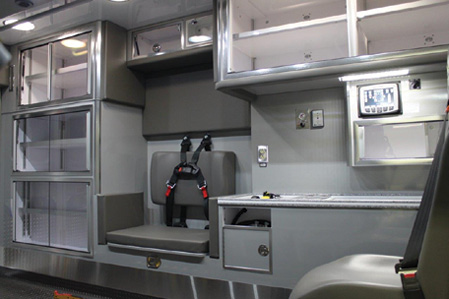 Excellance can add a second air-conditioning (AC) and heating unit onto any type of ambulance chassis, Pugh points out. “We have been focusing on dual independent AC systems in the module that do not require a generator,” he says. “When run in unison, you get the compounded effect of one helping the other, and for a truck that’s sitting out in the sun for a while, it cools the module down in minutes because of the dual-capacity AC systems.” 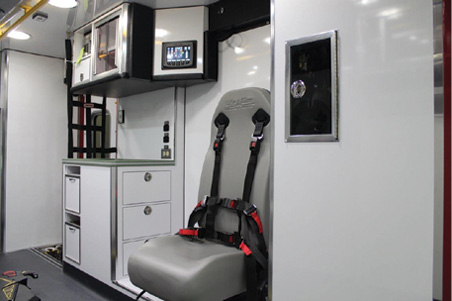 8 Six-point harnesses, like this example on a Life Line Emergency Vehicles ambulance, are gaining in popularity and, in some cases, mandated by various states.

Pugh says that Excellance has seen an increase in the past year of customers going bigger with their ambulance chassis. “We are building a lot more quad cab (four-door) chassis ambulances,” he points out. “We also are building more Mobile Stroke Units (MSUs), like ones we built for the Cleveland (OH) Clinic, the Phoenix (AZ) Fire Department, Rush University, and Indianapolis, Indiana. This is a concept that originated in Germany, but it’s growing in this country, and we expect to see more of them going into the larger metropolitan areas.”

Braun Industries recently announced a partnership with Pierce Manufacturing Inc., to bring the Pierce Saber® chassis to the Braun Patriot ambulance. Kim Braun, Braun Industries president, notes the resulting apparatus will be versatile and can serve as an ambulance, rescue vehicle, and fire suppression unit. She says it is ideally suited for volunteer fire departments without the personnel to staff several emergency vehicles. 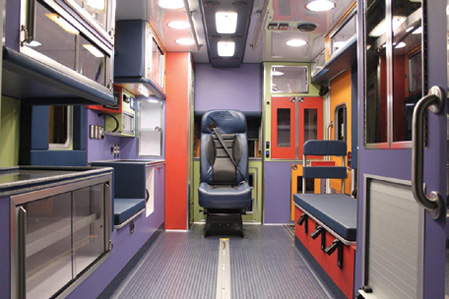 9 This Life Line ambulance has a captain’s chair at the head of the cot, CPR seat on the road side, and squad bench on the curbside of the module.

Rowland notes that when Demers designs ambulances used by fire departments and staffed by firefighters, it often has installed personal protective equipment (PPE) compartments sealed off from the rest of the ambulance. “The sealed PPE compartment is typically on the street side of the rig,” he points out, “and usually is a full-depth and ¾-high compartment. It will have brackets for self-contained breathing apparatus, space to store the turnout gear down low, and a high hanging position for helmets. It’s really a small PPE locker that’s fully sealed.”