More
Home Fire Apparatus All Those Gauges: What Are They Telling You? 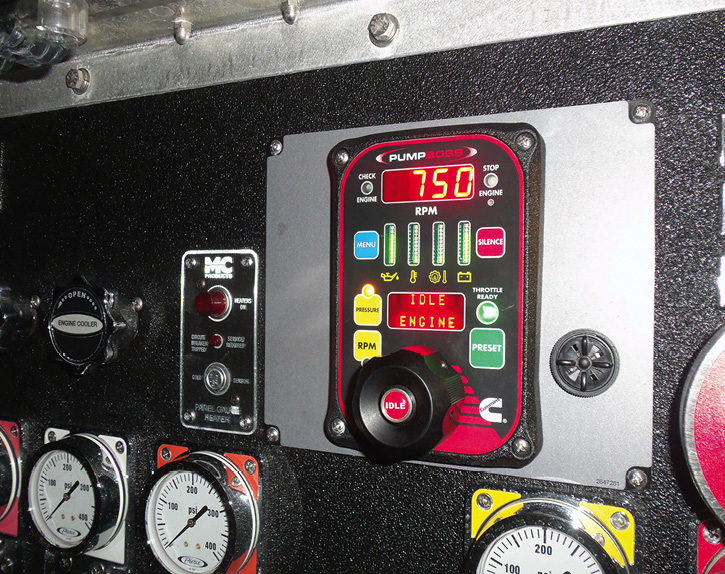 When a firefighter gets in the driver’s seat of a fire apparatus, he mostly thinks of getting the rigs started and where to go. What is the safest and most direct route?

What will I encounter when I get there? But, rarely does the apparatus driver think about all those gauges on the dashboard in the cab of the apparatus. The fact is the information being relayed by those gauges may mean the difference between getting to the intended location or maybe not even pulling out of the firehouse. So, let’s take a look at the gauges and what they are telling us.

When I first started to drive, the popular (and incorrect) mindset was that all teenage boys knew everything there was to know about automobiles including how they operate; how they are put together; and how to fix, repair, and maintain them. Nothing could have been further from the truth then, and the same applies today—especially when we are talking about fire apparatus. Just because someone has been assigned to drive doesn’t necessarily mean the assigned person knows anything about how the vehicle operates or behaves. This is particularly true of the gauges. There are a number of gauges on the dashboard, each having a separate and distinct function.

This gauge identifies the amount of fuel that the apparatus has in the tank. Few know how much fuel the tank actually holds, and even fewer know how much fuel their apparatus consumes during operations. Not surprisingly, fire apparatus don’t achieve spectacular fuel economy. A fire apparatus is a piece of heavy equipment that was designed to function at a fire scene. It wasn’t designed to be an over-the-road vehicle with fuel economy as a primary design consideration. In most cases, response distances are short, and not much fuel is consumed during the ride to and back from the scene. But, in between is a totally different story.

A pumper working at a fire can use between ¼ and 1⁄3 of a tank of fuel in one hour. This is why it is critical to check the fuel gauge at the start of every shift. There should be an established procedure for when the fuel tank should be filled or topped off. A good rule of thumb would be when the tank is at or below ¾ tank level, add fuel. Imagine the impact of letting the fuel level fall to ½ or less and then catching a working fire where your apparatus will be pumping for one or more hours. How long before you have to call the logistics officer and explain your need for fuel?

A chief of a small career fire department relayed the story of an engine company where the fuel gauge was broken. Budget shortfalls prevented the fuel gauge from being fixed or replaced, so the accepted practice until the new gauge was installed was for the on-duty shift to top off the fuel tank each morning at the change of shifts. A confluence of circumstances began to swirl. The night shift caught a fire and had to be relieved on the fireground. The day shift worked on the fire scene for a number of hours. The engine company with the broken gauge wasn’t the pumping engine apparatus, so the day shift mistakenly believed that very little fuel had been used and didn’t top off the fuel tank. In reality, the engine was left running and idled all night.

2 3 Many newer pumpers have transitioned to digital control module type gauges. You need to scroll to various functions by pressing the menu button. These photos show the pump at idle and an engine temperature. Pressing the menu button will also display oil pressure, pump pressure, system volts, and other important data elements.

Fortunately, the relief shift had a relatively quiet rest of the tour. The next morning, a Saturday, the next shift came on duty. Since it was a weekend, and the fuel pumps at the public works department were closed, the new shift didn’t top off the fuel tank. The same thing happened on Sunday. Over the weekend, the engine company caught a number of runs but no working fires. On Sunday night, while returning from a call, the apparatus began to run rough and finally conked out. The officer called for assistance as the engine sat on the side of the road unable to move. A mechanic was called in and, since this was a weekend night, the expense included an extra cost. After checking the apparatus out, the cause was determined. The fuel tank was bone dry. Multiple cases of name calling and blame assigning couldn’t mask the simple truth that had the gauge been fixed in a timely manner the entire event wouldn’t have happened. And, a lot of officers and firefighters wouldn’t have had egg on their faces for not topping off the fuel tank.

The air pressure gauge registers the amount of air pressure in pounds per square inch (psi) in the onboard air tank. This tank supplies air for the air brakes as well as the auxiliary air pressure discharge port. This discharge port can be used to pressurize the 2½-gallon water can or to attach an air hose with air chock. Additionally, the onboard air tank provides the needed air pressure to operate the air-actuated road-to-pump switch. If there is an air leak in the system, the air pressure will drop below 60 psi, in which case the air brakes will not release and you will be unable to move the apparatus until the system builds up to a minimum pressure of 60 psi. The normal reading should be approximately 90 psi. Should an air hose become disconnected, the braking system will engage, and the apparatus will be prevented from moving. This same air tank provides air for air horns. Excessive use of air horns could potentially steal air from the braking system.

The volt gauge provides an indication of electric system capacity on the apparatus. This voltage is direct current, or DC. The typical reading should be between 12.5 and 13.5 volts. If the reading is above 13.5, you need to discharge some of the electric. This can be accomplished by turning on lights or other equipment that runs on electric. On the other hand, if the volt gauge reads below 12.5, you need to shed some of the electric load. There can be a number of reasons for low voltage, one of which may be a loose alternator belt or a malfunctioning alternator. Both of these are serious situations that will prevent proper operation of the vehicle.

4 Older apparatus used analog type gauges. While the pump panels were primarily used for monitoring pump pressures (including incoming and master discharge pressures), there are several other gauges that need to be monitored during any pump operation. These include items such as oil pressure, water temperature, and fuel level.

Some mistakenly believe the water temperature gauge lets you know the temperature of the water in the pump, but that is not the case. This gauge keeps you informed of the temperature of the cooling system fluid, which is usually a mixture of water and engine coolant. The fluid circulates around the motor. The heat generated by the motor transfers to the coolant, and the heated fluid travels back to the radiator where air passes over the fins of the radiator to dissipate the heat away from the motor. When driving, air is forced over the fins of the radiator as the apparatus moves forward. Normal operating temperatures while driving can be between 180°F and 200°F depending on existing weather conditions. The strength of the coolant will also have an impact on the temperature. The weaker and older the coolant, the less likely it is to perform at peak levels.

When a pumper is operating at a fire, no air is being forced over the fins of the radiator, and you have to rely entirely on the cooling system itself. It is normal to have a pumper with a temperature of between 200°F and 210°F, particularly on warmer days. But once the temperature gauge has a reading of 210°F or higher, it’s time to open the engine cooling valve. There should be a water temperature gauge on the pump panel as well as in the cab of the apparatus.

An additional concern is whether or not the correct type of transmission fluid is being used. Using the incorrect fluid may cause the fluid to froth and come out of the fill tube. Finally, like all the fluids in your apparatus, the transmission fluid should be drained, flushed, and refilled with the manufacturer’s recommended transmission fluid at intervals stated in the apparatus operating manual. Failure to adhere to a strict maintenance schedule could spell trouble, resulting in less than desired reliable life expectancy.

Depending on the type of apparatus you are driving—e.g., engine, ladder, or specialty vehicle—you may have duplicate gauges on the pump panel, operating podium, or other location on the apparatus. You should get in the habit of comparing the gauges in the cab against the gauges in other locations on your apparatus. If they are not providing comparable readings, you likely need to have one or both gauges calibrated for accuracy. Having a problem identified by a gauge reading is bad enough. Having a problem that is not identified because of a bad gauge is even worse.

The information provided above gives general suggestions regarding operating ranges. As in all cases, check the operations manual for the particular apparatus to obtain the manufacturer’s recommended operating values.

JERRY NAYLIS has served in career and volunteer fire departments for more than 40 years. He has a bachelor’s degree in fire science from Jersey City State College and a master’s degree in administrative science from Fairleigh Dickinson University. He is a NJ-certified fire instructor and has taught at FDIC International and throughout the United States, Canada, and the United Kingdom on a variety of fire-related topics.