Vintage fire apparatus enthusiasts are often ready to take on some serious challenges when it comes to apparatus restoration. Dave Durrant, of Tower, Minnesota, located in the Iron Range of northern Minnesota, is a one-time fire apparatus salesperson, now semiretired, and a board member of the Tower-Soudan Historical Society. He has been active in researching the history of an 1891 Ahrens third size 600-gpm steamer pumper that served Tower well. The pumper is named “James Tippet” after an early Tower mayor and carries a build number of 668, making it one of the last units built by Ahrens before the company joined several other manufacturers that would eventually become American LaFrance. The horse drawn ”Tippet” remained in service until 1928. 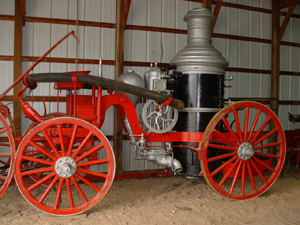 Life in Retirement
Since the steamer’s retirement, it has remained in the City of Tower, and has mostly been kept indoors in a variety of buildings and sheds. Several years ago, the city transferred ownership of the rig to the historical society. The goal now is to restore Tippet and also acquire the 1894 fire hall where the rig was housed while in service at the turn of the 20th century. Currently Durrant is working with the board to pass a resolution to continue restoration efforts to preserve the vintage pumper. With that resolution secured, there is a core of the society’s members ready to go to work.

Although the society’s membership is well over 100 members, Durrant estimates that the actual work crew will number eight to 10 workers. One of the major restoration items is removing several coats of red, black and silver paint. During its retirement, the old steamer has often been a project for community service—with the town supplying the paint. The pumper is mostly intact, which is amazing considering how long the rig has been out of service and the many moves it has made while in storage. That said, the rig is still a long way from being at “in service” condition.

Finding Expertise
Durrant has been in touch with Ed Hass, an expert on everything Ahrens-Fox. He has also been in contact with Ken Soderbeck, a master fire apparatus restorer working out of Michigan. Ken Peterson in Burnsville, Minnesota, has been a valuable resource on the history of the age of steam and also on the nuts and bolts end of restoration of all antique fire apparatus. These sources have been helpful with information and suggestions regarding how to proceed with the restoration.

Durrant sent us pictures of the Tippet and also of the old firehouse. Both the pumper and the firehouse present huge challenges, but will bring about wonderful rewards when completed. Durrant is comfortable with all the research, including the original specifications from the sales order. Volunteer labor is an important component. Finding resources that can repair or remake wooden spoke wheels is another piece of the puzzle. Time and money round out the needs to complete the project. Durrant has some interesting ways to raise the funds. Now all he needs is that continuing resolution to move forward.

It could be several years before the steamer restoration is complete. Then there is the issue of acquiring and restoring the 1894 fire hall to properly show the restored rig. If everything comes together, what a quality attraction will be in place to show the history of the fire service in Tower, Minnesota, as it was at the turn of the 20th Century.