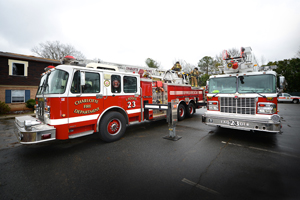 During that time, Ladder 23 has been through 1,890 gallons of oil, 158 tires, and 76,542 gallons of diesel fuel, but only had 34 aerial-related work orders during the ten-year span. This long service life is why Charlotte Fire ordered another Smeal apparatus to replace Ladder 23.

Captain Buddy Caldwell of the Charlotte Fire Department sums up the value of a reliable vehicle. “A truck is a firefighter’s life for 24 hours when they’re on shift,” he says. “They trust that truck to be dependable, to get them to every call, and to function the way it’s supposed to function when they get there. It’s an integral part of their job. And, it’s all got to work.”

Now in reserve status–and replaced by a new 2012 Smeal 105-foot rear-mount aerial)–Ladder 23 and its crew will be making a special appearance at booth 3537 at the 2013 Fire Department Instructors Conference (FDIC) on April 22-27 in Indianapolis, Indiana. Attendees are invited to stop and meet the crew and hear stories of Ladder 23’s exploits and share their own experiences.