The North Patchogue (NY) Fire Department on Long Island began looking into the purchase of a quint a few years ago. According to Ted Peters, assistant chief, the department wanted to have a vehicle that would be a first-out response vehicle to respond to all alarms between the hours of 6 a.m. and 6 p.m. and be able to handle the work load with limited staffing if necessary. It would also be used for mutual-aid responses locally, if requested.

The district is primarily like all others on Long Island—numerous apartment and condo complexes as well as strip shopping centers, schools, big box stores, restaurants, and a major medical center. So, this vehicle would have to be able to operate at all these types of target hazards as well a normal dwelling fire.

Since it operates primarily Pierce apparatus, the department was interested in continuing along this line. The local Pierce dealer had informed the department that the manufacturer was going to introduce a new line of aerials, so North Patchogue waited to see what Pierce was offering.

The new Ascendant line of aerials was introduced, and the department decided to go with a 107-foot Ascendant ladder on a single-rear-axle Velocity chassis. The truck committee comprised chiefs, commissioners, and district employees.

North Patchogue worked with Firematic, the local Pierce dealer on Long Island that it had a great relationship with previously on its other purchases. The quint was purchased through the Houston, Galveston Area Cooperative (HGAC), which is a group purchasing organization. By working with HGAC, the department didn’t have to go out to bid, saving a great deal of time. 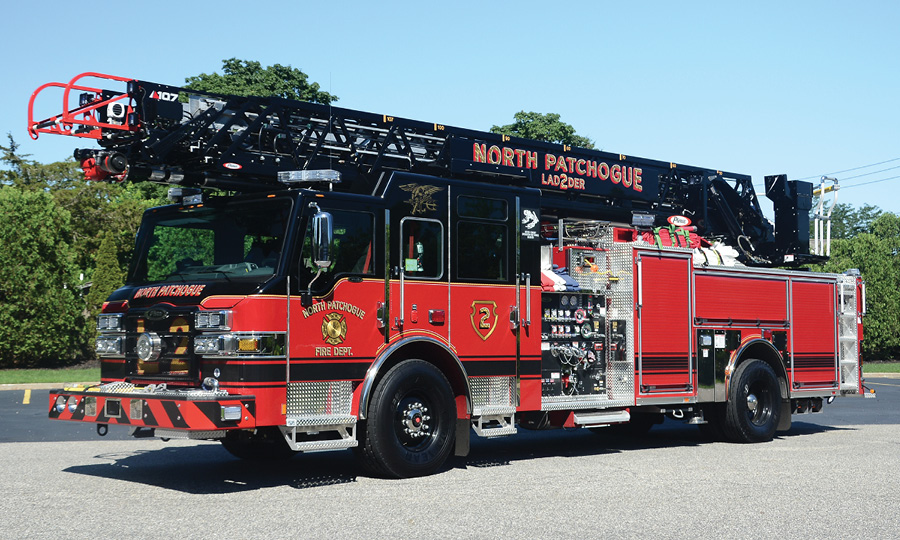 The vehicle is set up to be used as an engine, a truck, and a heavy rescue. It carries a full complement of HURST battery-operated rescue tools that can be backed up by the vehicle’s generator if needed. It also carries the normal engine company fittings and tools, a full set of saws, Milwaukee battery-operated grinder and band saws, a man vs. machine kit, shoring and struts, and battery-operated fans. 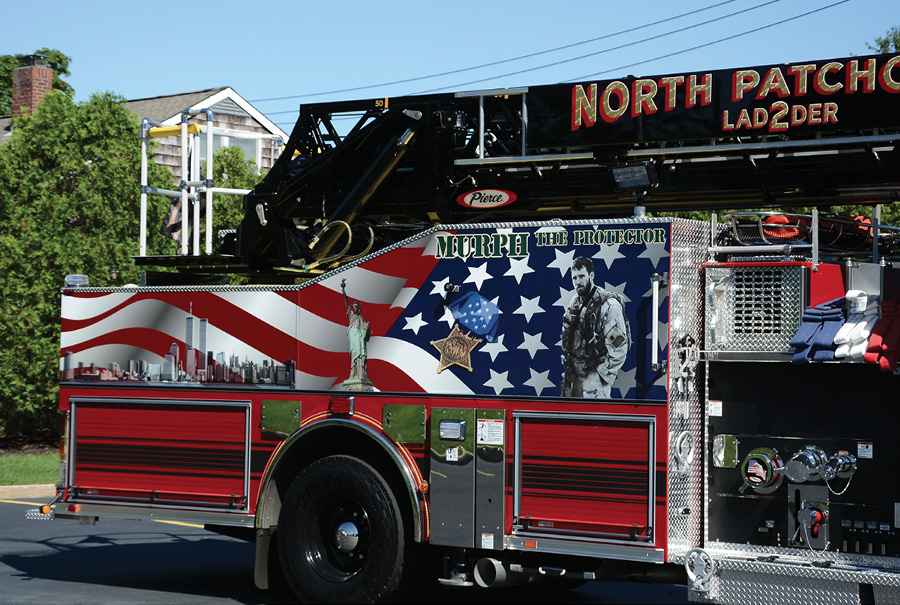 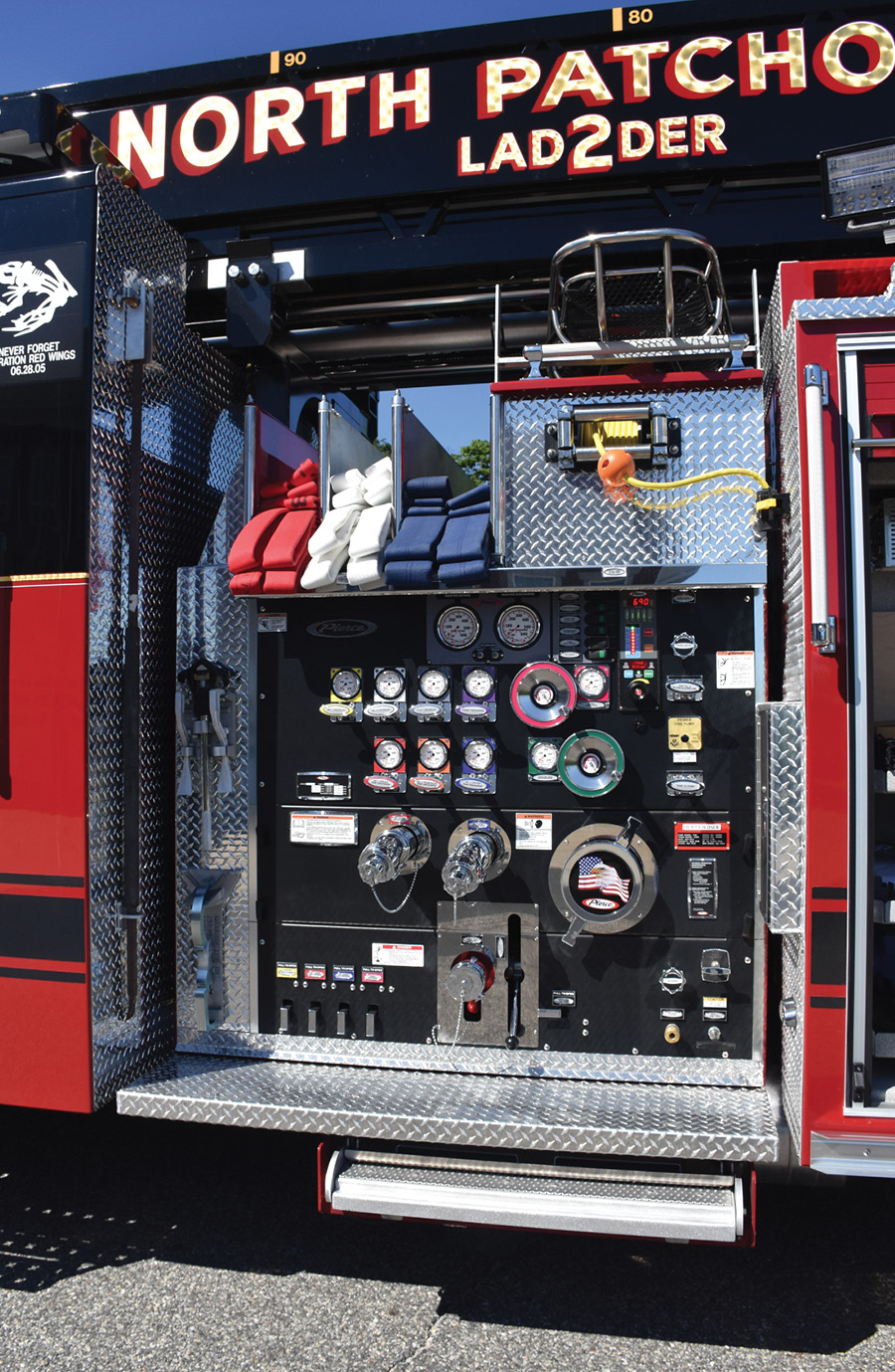 2 The officer’s side mural on the truck shows the Manhattan skyline, the Statue of Liberty, the Congressional Medal of Honor, and Lieutenant Michael Murphy. 3 The quint’s red, white, and blue crosslays.

The department packed a great deal of equipment and hose onto this vehicle so it would suit it well in all types of scenarios. The large compartments on the truck provide a great deal of space to mount all of the equipment crews need to operate.

The department had a good experience working with Pierce. It never had any major problems during the build or service after the sale. Traveling to the factory allowed committee members to see what other departments were installing on their vehicles. 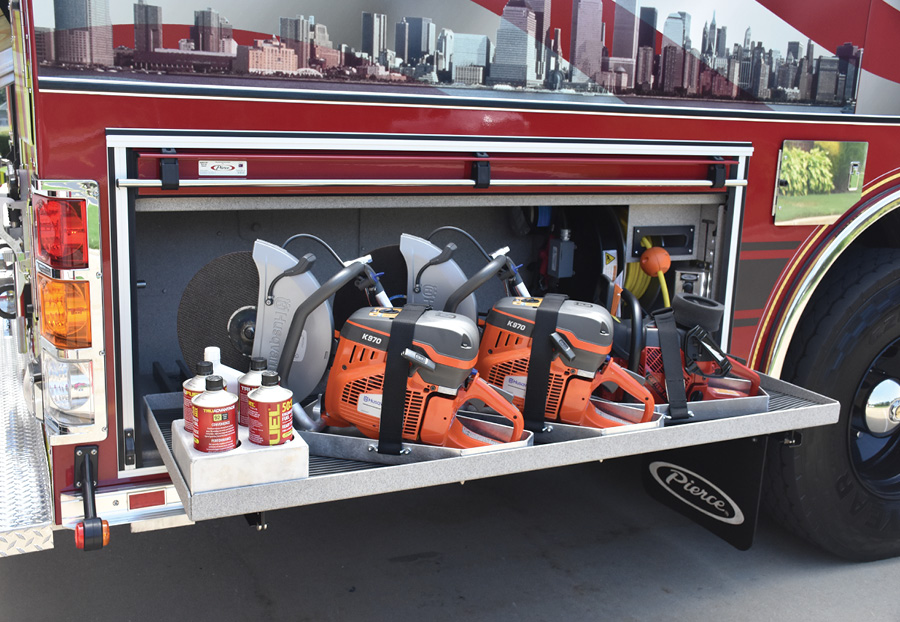 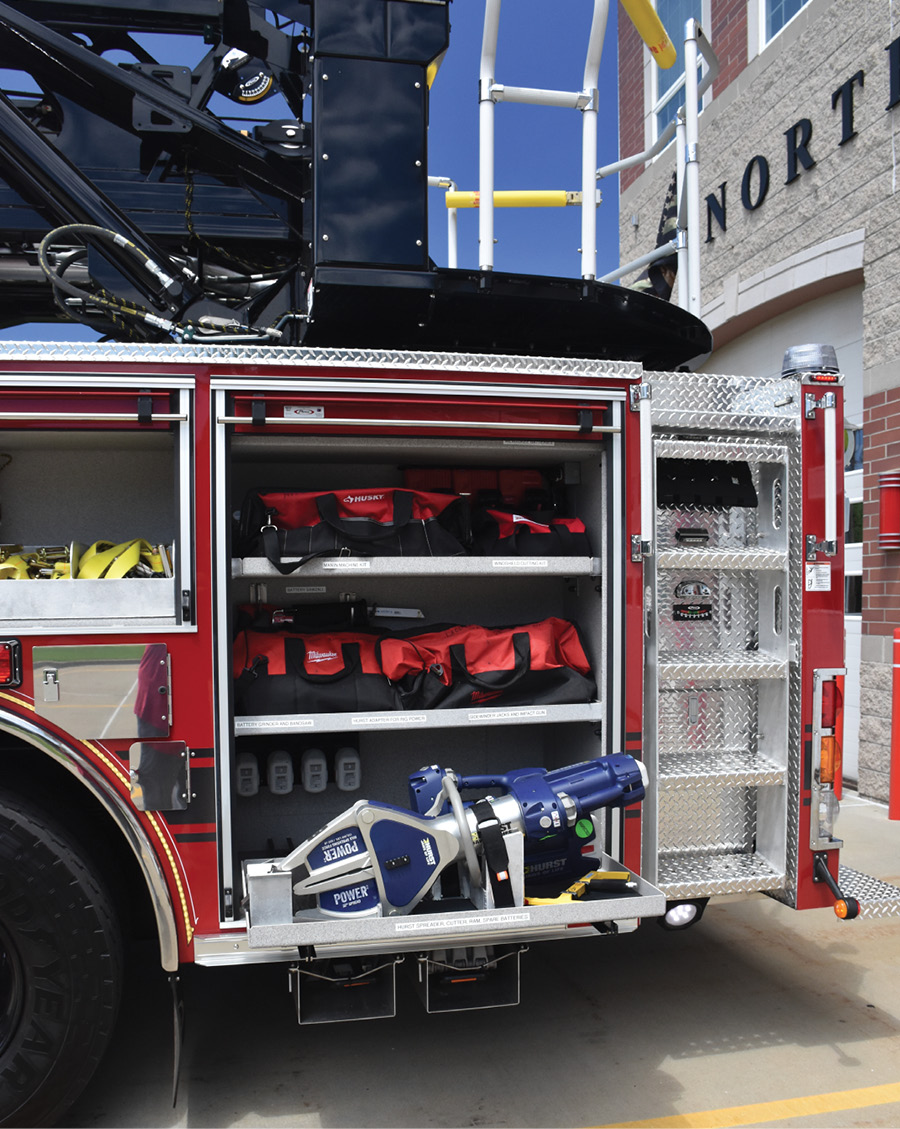 After ordering the vehicle, the chief’s office decided it wanted to dedicate the truck to a local hero, Lieutenant Michael Murphy. The department contacted family members to see if they would be agreeable to this honor for their son. They were. Department representatives worked on the mural that was placed on the officer’s side of the vehicle and had it ready for the dedication ceremony, which Murphy’s mother, father, and other family members attended. 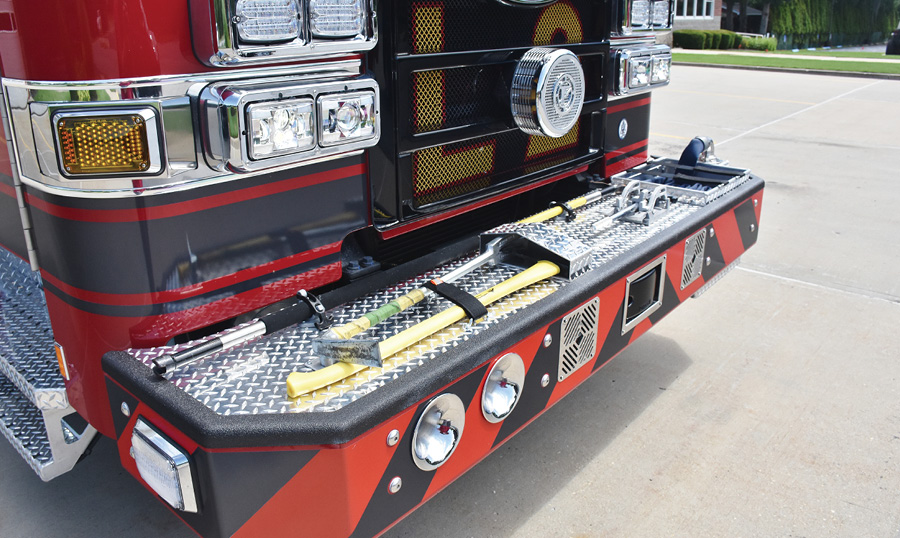 6 The front bumper of the truck carries forcible entry tools, a hook, and a 1¾-inch handline.

Proper planning for a multiuse vehicle has to be performed before considering a purchase of this type. The North Patchogue Fire Department was proactive in its thinking. It looked into the target hazards in its community and built the vehicle to handle just about any type of response as an engine, a truck, or a heavy rescue. It also carries a variety of hose options for different types of hose evolutions in a local hospital and various apartment complexes.

This vehicle should last well into the future and handle a multitude of responses. It has large enough compartments to accommodate future equipment purchases and carries more than enough hose.

Like I have preached in past columns, “Plan for the future, not the just the present, and you shouldn’t go wrong” in any type of apparatus purchase.