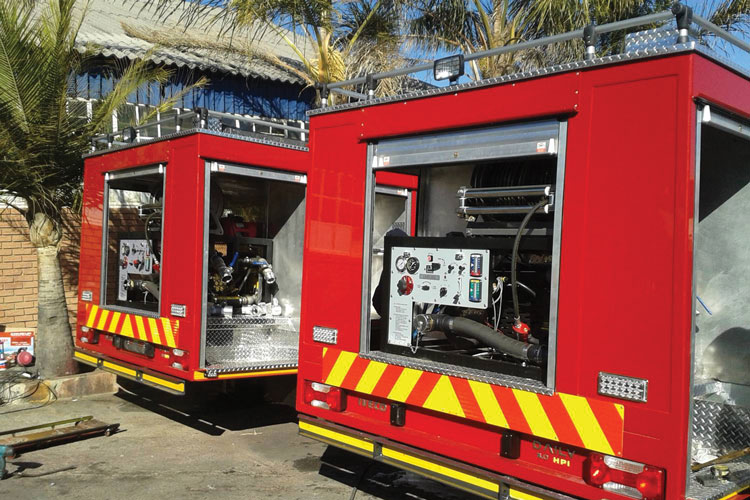 Ultra-high-pressure (UHP) pumping systems have been around for a while but are attracting more attention recently in using their higher pressure to extinguish flammable liquid fires; wildfires; and, in some cases, even fires such as room-and-contents fires.

Ryan Darley, international sales manager for W.S. Darley Co., says Darley makes an ultra-high-pressure-high-volume (UHP-HV) pump that has proven popular for wildland and rescue truck use in the United States, as well as in New Zealand and South Africa. “It’s two pumps driven off of one engine, plus Class A or B foam,” Darley says. “The Model 2BE-23V has a UHP side running at eight gallons per minute (gpm) at 1,300 pounds per square inch (psi) driven by a 23-horsepower (hp) Vanguard gasoline engine driving a CAT 7CP high-pressure piston pump with foam injection, typically through a ½-inch-diameter hoseline. The system also is available with a 24-hp Kubota diesel engine.”

Bill Carroll, general manager of HMA Fire, says HMA has been shifting its focus from military and government sales to municipal fire departments “now that National Fire Protection Association (NFPA) 1901, Standard for Automotive Fire Apparatus (2016 ed.), and NFPA 1906, Standard for Wildland Fire Apparatus (2016 ed.), have UHP sections in them.” He notes that one of HMA’s UHP units is going on a rapid response vehicle (RRV) built on a Ford F-550 chassis with super single tires manufactured by Pierce Manufacturing for the Middleton (WI) Fire Department with a 300-gallon water tank and 30-gpm bumper turret. “Instead of a skid unit, it’s coming off the live-drive power takeoff (PTO) that allows pump and roll. The system will pump 30 gpm at 1,300 psi,” Carroll says.

Carroll points out that HMA Fire has built 30-, 60-, and 90-gpm UHP skid unit systems using Waterous and Hale centrifugal pumps. “We build a 90-gpm system at 1,300 psi that will supply a 70-gpm bumper turret and a 20-gpm handline simultaneously,” he adds. “But the 20-gpm UHP is our most commonly used system. It can fit in the back of a pickup truck or be fitted into a small rescue.”

Kevin Quinn, president and owner of E.J. Metals, says his company makes UHP systems in the six-, eight-, 10-, 16-, and 20-gpm range operating from 1,500 to 3,600 psi. “We recently sent two units to Pierce Manufacturing to install on rescue trucks in the dunnage area on top and tied into a reel on the front bumper holding two-wire ½-inch hose,” Quinn says. “The units put out 20 gpm at 1,500 psi.”

Another player in the UHP field, Kimtek Corp., makes the Firelite Transport FTUHP-400 series UHP skid unit for pickup trucks that features the FoamPro Turbo Stream high-energy firefighting system from FRC. Powered by a Honda 13-hp gasoline motor with an electric state, the skid unit delivers eight gpm at 1,400 psi and can handle a foam injection rate of between 0.3 and 3.0 percent. The unit is available with a choice of a 125-, 160-, or 200-gallon polyethylene water tank with an integrated five-gallon foam cell.

Chanc Bennett, division chief of operations for the Euless (TX) Fire Department, says his department mounts a Darley 2BE-23V UHP-HV system on its Squad 55 multipurpose vehicle, a Ford F-550 chassis that carries 300 gallons of water; Holmatro CORE Technology™ spreader, cutter, and ram; and advanced life support (ALS) equipment. “We’ve been using UHP on vehicle fires, dumpsters, and grass fires,” Bennett says, “and because it has foam capability, after a structure fire we’ll use the high-pressure side to foam the walls inside the building as a measure of protection.”

The Euless Fire Department has 63 full-time paid firefighters, seven administrators, two engines, one ladder, the squad, and three medic units. “We’ve been using UHP for three years and would buy another UHP system when the need arises,” Bennett says. “The firefighters really like its penetrating power and low water use. They say it seems like they could fight a fire forever on 300 gallons of water.”

“Depending on the scenario, we use UHP on more than 90 percent of our structure fire calls,” Harris points out. “Our RRVs are able to get on the road within 60 seconds of being paged. On scene, they can initiate an exterior attack to cool down the fire or, if the fire is small enough, go to an interior attack. But, we wouldn’t use UHP on a structure fire when the radiant heat energy is such that we had to throw water from 40 to 50 feet away. The biggest thing we learned with UHP is to attack the base of the fire where the most heat is.”

Harris maintains that “UHP can paint a room so much faster than a conventional handline. The more you can apply the smaller water droplets, the faster you collect that energy and the faster the fire goes out. And, our scenes are left dry because we are not causing additional water damage,” he says.

Quinn points out that some fire departments are using UHP for initial attack on structure fires. “The Norwalk (WI) Fire Department bought a six-gpm at 1,800-psi UHP unit on a brush truck trailer with 150 feet of hoseline,” Quinn says. “They were able to put out a garage fire with less than 10 gallons of water and foam, which meant very limited damage compared to using a high-volume pumping system and a lot more water. Some departments are putting 16- and 20-gpm UHP systems on Type 1 pumpers and taking down room-and-contents structure fires with them.”

Doug Kelley, product manager for KME, says KME has had the most sales of its UHP systems go to airport use, particularly with the U.S. Air Force. “They have spent a lot of time and effort in testing UHP and found it to be very effective, with a lot of knockdown power using less water,” Kelley says. “Their P 34 rapid intervention vehicle (RIV) has a UHP system on it that will flow 90 gpm at 1,200 to 1,500 psi.”

Kelley says the U.S. Navy has had KME build slightly smaller units on brush/wildland trucks, usually in the 20-gpm range or smaller, running at 1,500 psi. “The Navy even put a PyroLance UHP system on a rescue truck, where the system introduces an abrasive medium into the water stream that allows it to cut through walls and even mild steel plate,” he notes.

Mike Laskaris, director of engineering for Hale Products Inc., says Hale offers UHP systems in the mid range, from 60 to 90 gpm at 1,500 psi. “Our biggest customer is the U.S. Air Force on their RIV,” Laskaris says. “Our last two contracts were with KME building the RIVs, where we provide a complete engine and foam pumping system. It’s a 175-hp diesel engine with a four-stage UHP pump and Class A and B foam system.”

The P 34 RIV is built on a Ford F-550 chassis and cab, carries 400 gallons of water, has two 15-gpm hose reels with Akron Brass nozzles, and has a 60-gpm Elkhart Brass bumper turret. The UHP system can supply 90 gpm across all three discharges. “The Air Force will use the P 34 as first due on vehicle fires, grass fires off the runway, wheel fires on aircraft, and jet engine fires where they roll the bumper turret up to the engine and extinguish a fuel fire-often without using foam,” Laskaris says. “It’s also great on a room-and-contents fire that hasn’t vented yet.”

Hale Products also has had its UHP systems built into trailer units. “These are popular in industrial facilities, conventional power plants, and nuclear power plants where they can be used for fire suppression or as a feeding backup unit to cool a reactor,” Laskaris says. He believes interest is growing in increasing the use of UHP. “It’s a firefighting tool like any other tool firefighters have available,” he observes.