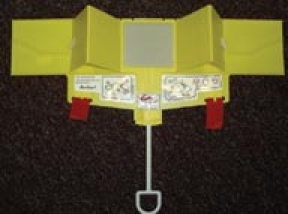 Here is a good way to mount a quick-deploy preconnect. It’s
down low, has an Akron Zero Torque handling assist and an
easy to remove holding strap. (Fire Apparatus Photo) 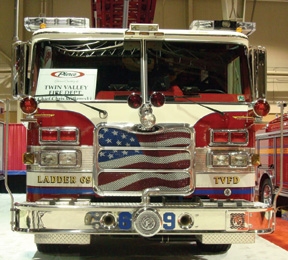 Pierce’s new ladder for Twin Valley Fire Department had just
about everything a firefighter could want – twin Mars lights, a
Roto Ray, Federal Q, front scene light and an American flag
on the grill.  (Fire Apparatus Photos by Bob Barraclough) 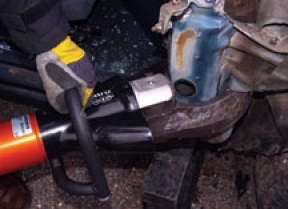 European styling has arrived at KME. This 1,500-gallon crash
truck is the first of its new series of CFR units that will be
marketed worldwide.

In what has become the biggest all emergency vehicle show in the U.S. or Canada, the Pennsylvania Fire Expo, sponsored by the Lancaster County Firemen’s Association, attracted over 20,000 interested fire folks to its 37th annual event in Harrisburg.

As is normal for this event, the biggest, the most gold leaf, the most unusual options all seem to end up on display in Harrisburg. For fire truck nuts, it’s like being a kid in a candy shop.

Even though attendance was slightly down from previous years, the quality of the attendees and their interest in new apparatus was high. Noteworthy was the number of manufacturers who were displaying stock units for sale. This should satisfy those who take a couple of years to decide what they want and once the decision is made, they want it now.

KME (the home state builder) had a large variety of units, including a beautiful tractor-drawn aerial (TDA) for Reading, Pa., and an exotic design for a new crash truck series. Well done on these units. While speaking of KME, they had the first pumper I have seen that will meet the 2010 EPA requirements, which take effect in January.

With the budget crunch bearing down on everyone, the questions are: what will the price increase be to meet the new emission requirements, and will fire departments rush to place their apparatus orders in the second half of 2009 to beat the price increase?  If you have the answers to these questions, you probably should be consulting with your favorite apparatus builder. By the way, incoming orders for the first six months are down considerably from forecasts so the activity in the last half of 2009 is critical to the health of most builders in 2010.

Back to the show. Every year it seems that some fire department wants to have its big truck on exhibit, and they show up with a Peterbilt, Mack Granite, Autocar or whatever. This year’s star was a Rosenbauer Peterbilt conventional chassis pumper complete with twin stacks and a beautiful crew cab enclosure for North Bailey, N.Y..

Seagrave seems to do very well in Maryland, Eastern Pennsylvania and parts of Delaware. Seagrave’s red and white custom pumper for Christiana, Pa., and the yellow aerial for Yeadon, Pa., were both well done. As usual, there were almost as many shades of trucks as there are colors in the rainbow.

Hand-applied gold leaf is alive and well, especially in the Pennsylvania, New Jersey and Delaware area. Mission Fire Co. of the Bordentown (N.J.) Fire Department had its new E-ONE pumper gold leafed by Danz. If you will notice, someone forgot to apply reflective striping to the front of the unit.

One of the more interesting combinations of gold leaf and shading is the two-tone blue highlights on gold used by Memphis FD. This combination was also common on trucks produced by Maxim Motors years ago.

There were many varieties of what NFPA calls initial attack vehicles, or in some cases brush trucks, on display. The Ford 450/550 has enough GVW to carry 300 gallons of water, some class A foam and the minimum amount of equipment. Unfortunately, Ford moved some chassis components around, making the installation of a midship or high capacity PTO  pump almost impossible. Skid and portable pumps have taken over the pumping duties.

There were lots of good ideas that were included on the show trucks.  See the pictures along with this column.

I was pleased to see a well-done Hahn refurb by Swab Body for Towamencin (Pa.) Fire Company.  One of the former Hahn workers claims that it looks better now than when it left the factory.
That’s about it for now. I am off to the NFPA Apparatus Committee meetings and the Firehouse show in Baltimore and then to celebrate my 50 years in the fire business at Fire Rescue International in Dallas. Stay safe.

Editor’s Note: Bob Barraclough is a 50-year veteran of the fire service and fire manufacturing industry. He is chief columnist for Fire Apparatus & Emergency Equipment magazine and a 20-year member of the NFPA 1901 Fire Apparatus Standards Committee. A principal organizer of the annual FDSOA Apparatus Specification Symposium, he is also a past president of the Fire Apparatus Manufacturers Association. Barraclough serves as a consultant to Rosenbauer America and Akron Brass and is called upon as an expert witness in litigation involving fire industry products. His career includes executive positions at E-ONE, Hale Fire Pumps, National Foam, Span Instruments and Class 1.