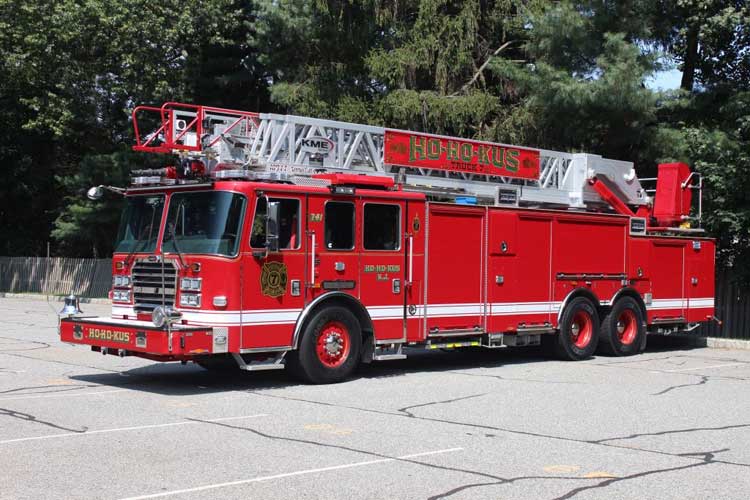 Ho-Ho-Kus (NJ) Volunteer Fire Department was looking to replace an aging 75-foot rear-mount aerial ladder with a unit that would give them a lot more horizontal reach and also much more equipment storage space. Its existing aerial, a 1993 unit, was approaching 25 years in service and was costing the department money and continuing maintenance to keep it operating properly.

Keith Rosazza, Ho-Ho-Kus’s chief, says, “The truck committee performed great due diligence. We brought in every manufacturer with a product that fit our needs, and we looked at all the options they had to offer.” Rosazza notes that the department didn’t want a platform because there are a number of platforms available to Ho-Ho-Kus from mutual aid departments. “We wanted a rear-mount ladder that would give us extended horizontal reach, because that’s an area where we fell short, especially with all the homes in our district that are set back from the roads.”

Ho-Ho-Kus decided that the KME 109-foot AerialCat™ was the vehicle that would be the answer to its needs. “The 109 is a good match for us,” Rosazza says. “It has the reach we wanted, and the storage capacity is great because we expected to do more with this truck. We had taken on additional missions like rope rescue and mass decon as part of a task force, and didn’t have enough compartment space on the [old truck] so we had to shelve equipment and put it on a pickup truck if it was needed.” 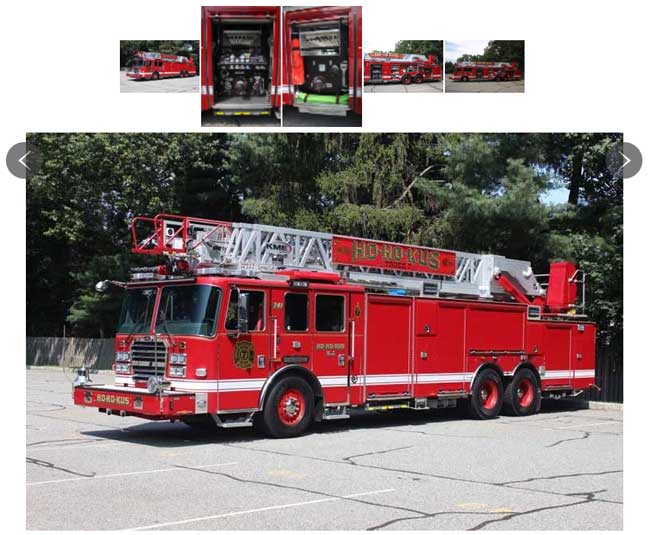 Tim Besser, northeast regional accounts manager for KME, says the department “wanted the flexibility of a quint with the storage capacity of a straight ladder company, so it was a challenge to get those components together in one unit.” The vehicle built for Ho-Ho-Kus has a 1,250-gpm Hale pump, a 300-gallon water tank, two 1¾-inch full-width crosslays in the front bumper, a transverse compartment over the pump house, and 216 feet of ground ladders in a torque box compartment.

The rig has a 100-inch wide Severe Service LFD flat-roof cab with seating for eight firefighters and is powered by a 600-hp Cummins ISX15 engine, and an Allison 4000 EVS automatic transmission. Wheelbase on the AerialCat is 244 inches, overall length is 42 feet 3 inches, and overall height is 11 feet 6 inches.

Rosazza says the department has many homes in its district that are set back and have limited rear access where the land drops off at the back of the house, essentially making a three-story structure. “We wanted to carry every available ladder to the scene on our truck in case we couldn’t get the aerial to the house and had to use ground ladders,” he notes. “In order to get all those ladders on the truck, we eliminated the plumbing from the pump to the aerial waterway, which allowed us to put two additional ladders in the torque box compartment. When we use the aerial waterway, we roll out a 50-foot section of hose to the rear of the truck.”

Besser points out that the transverse compartment over the pump house was important to the department. “It was a big thing for them and challenged us with the size pump and water tank we were putting on the truck,” he says. “So, we put in a low-profile pump module similar to our Eliminator tanker line, which is about 36 inches high from the running board. We outfitted the pump compartment with a roll-up door and were able to give them three feet of transverse space above the pump module, especially after we moved the crosslays to the front bumper.”

Rosazza says the transverse compartment holds a fully-loaded Stokes basket, and has eight tubes for pike pole storage. “All our ideas came to fruition through KME’s engineering,” he says. “They never said ‘no’ to us.”

Besser adds, “This truck is a really unique package. It’s one of the most flexible aerials that we’ve built.”

Commentary: What’s Happening to All the Apparatus Dealers?