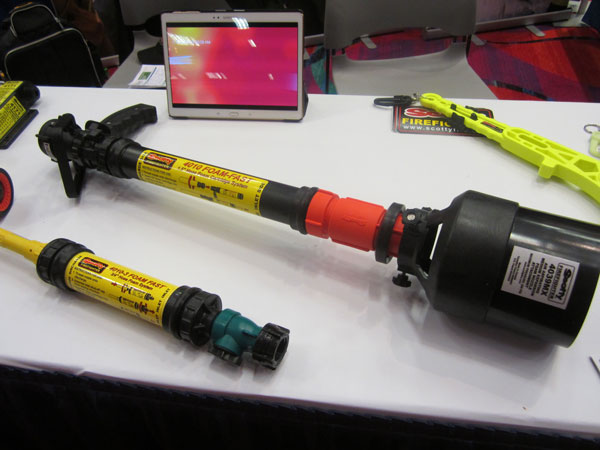 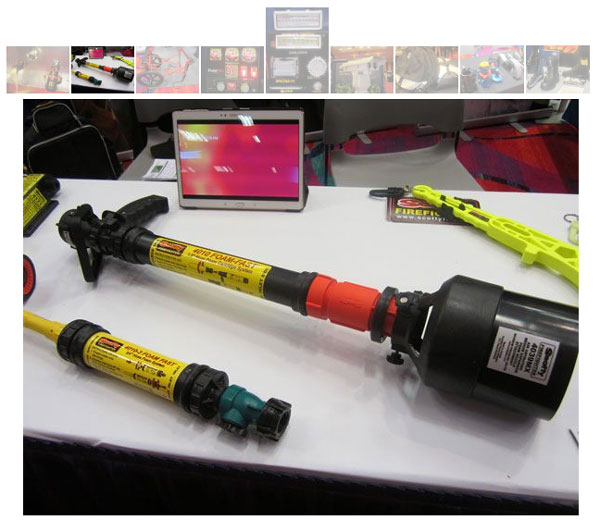 Equipment designed for wildland firefighting is arguably as important as the wildland and urban interface apparatus that carries it to the scene of a wildland fire. The recent Wildland Urban Interface (WUI) conference run by the International Association of Fire Chiefs (IAFC) at the Peppermill Resort in Reno, Nevada, had an exhibit hall filled with a wide array of equipment and gear that wildland firefighters use in suppressing wildland fires.

Eric Topacio, chief executive officer of Cedar Valve, says his company’s newly-redesigned 2½-inch valve shows a lower profile and is lighter in weight than its predecessor. The valve is used in situations when a pumper or tanker operator doesn’t want to be anchored to a hydrant or other water source, allowing the operator to quickly disconnect the engine panel while still hooked to a charged hydrant. Cedar Valve’s 2½-inch model can be easily used by a Type 3 engine on a water shuttle, Topacio says, and the company also makes a four-inch valve.

Phos-Chek, a maker of fire-retardant foams and gels used in wildland firefighting, introduced its newest product: FX, a Class B AFFF 3 percent military specification (milspec) retardant. Chris Thompson, Phos-Chek product manager, says FX is tinted pink for high visibility in air-assist applications, but that it is also being used in ground applications to protect structures and other vulnerable areas. “With ground-applied products, you get 100 percent coverage that can be applied hours, days, and weeks in advance, and even in night operations,” Thompson points out.

TenCate showed its new Tech T-4 base layer shirt for wildland use, a lightweight, tri-blended fabric product similar to athletic shirts that wick moisture away from the wearer’s skin, according to William Smith, sales manager for industrial products at TenCate. “Fire agencies like CAL FIRE and Fairfax County (VA) Fire Department are already using them,” Smith says. “And, we plan on bringing out a similar line of boxer briefs and sports bras as well.”

Amit Kapoor, president of First Line Technology, says the AmbuCarrier foldable litter his company makes, which was on display, serves as a manual transport rescue litter that can carry a Stokes, backboard, or NATO litter (used by the National Guard). “It weighs 34 pounds, has 18-inch wheels, which can be quickly changed out for sand wheels for beachside work, and fits in an apparatus compartment,” Kapoor says. “The litter also can be used for equipment transfer if needed.”

First Line Technology also makes the AmbuBus system, a structural steel kit that can be installed in a school bus or transit vehicle to accommodate up to 18 patients in the vehicle. “We currently have 480 units deployed in the United States,” he notes, “with fire departments, hospitals, and other agencies.”

Safe Fleet, the parent company of Fire Research Corp. (FRC), Elkhart Brass Co., ROM, and FoamPro, displayed products from its various brands, including FRC, which showed several lighting products, like the Spectra LED Evolution, the 900, Firefly, SoBrite, and Sunstrip. Dave Roll, Safe Fleet’s Northwest regional sales manager, says there was considerable interest in FoamPro’s Turbo Flow system, its Accumax controller, and its tank vision product, which are widely used in wildland applications. “Our system is easy to use and pretty simple,” he says, “and wildland firefighters don’t want it to change.” Also on display by Safe Fleet was Elkhart Brass’s Sidewinder monitor and nozzle, widely used as a bumper turret on wildland apparatus.

A.J. Frisell of Nargear says his company’s wildland gear bag, called the Body Bag, now comes in a wheeled version that is reinforced with 1,000-denier Cordura. “It has backpack straps, a 120-liter volume, and will collapse flat for easy storage,” Frisell points out.

Insight Robotics displayed its Robotics Wildfire Detection System that is comprised of a network of InsightFD1 wildfire detection robotic imagers linked to a central control room. Each robot provides 360 degree scanning, says Brendan Kramp, director of business development for the U.S. and Canada, and is equipped with thermal imaging and visible light cameras that communicate to Insight Globe, the company’s geospatial intelligence system. “The system is able to spot small fires up to 8 kilometers away within minutes of ignition,” Kramp points out.

In footwear, Haix exhibited its Missoula hiking boot for wildland firefighting, a black leather boot eight inches high, with a breathable insole, and Vibram outer sole as well as its Airpower XR1 wildland and EMS/station boot, which is nine inches high and made of waterproof leather with a Crosstech inner liner, and an Airpower XR sole.