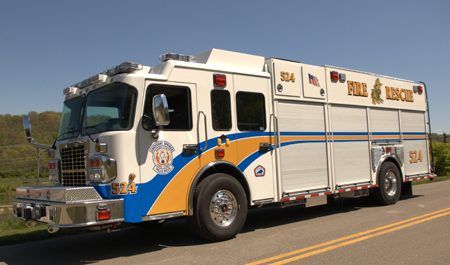 The Crescent Springs-Villa Hills Fire Department in Crescent Springs, Kentucky, was in need of a vehicle that could perform the dual functions of a first-line pumper and a traditional rescue. The department covers a 12-square-mile district out of a single station that encompasses the major interstate I-75, an airport, riverfront property along the Ohio River and a railroad.

Chief Jeff Wendt says the department “has more than 50 lakes in its coverage area, so water and ice rescue are important elements of a rescue vehicle, as well as extrications.” The department is staffed by 45 paid firefighters (including paramedics) and 46 volunteers.

Crescent Springs wanted to purchase a piece of apparatus that could handle not only the necessary rescues in the district, but one that could stand up as a first-due pumper. “We wanted the vehicle to do everything in one truck except ladder operations,” he says. “Our new rescue-pumper has lived up to our expectations at fires and extrications.”

Crescent Springs put together a committee that developed specifications for the rescue-pumper and put it out to bid, receiving eight bids. “Summit Fire Apparatus covered everything we wanted in the truck so we awarded the bid to them,” Wendt points out.

Joe Messmer, president of Summit Fire Apparatus, says he had served as fire chief of the Edgewood (KY) Volunteer Fire Department and knew Wendt before he became chief of Crescent Springs. “Crescent Springs interviewed a number of reps from different manufacturers to determine what was available and who could provide them with what they wanted,” Messmer says. “In the end, we weren’t the lowest bid, but we were the company that offered them everything they had asked for.” 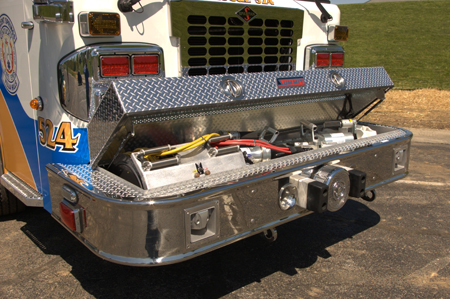 Messmer says that Crescent Springs wanted the pump panel to be totally enclosed on both sides of the vehicle. “We put in roll-up doors to house the pump panel and the piping, which negates the need for nets over the crosslays,” he notes. “The department wanted the doors because it makes the vehicle easier to clean, and they make a lot of runs on I-75 where the vehicle is heavily driven.”

It carries two 1¾-inch crosslays of 200 feet each and three 2½-inch preconnects of 200 feet, one with a gated wye that is used to run up stairwells where it can be connected to hose from high rise packs for work in apartment buildings. The hosebed holds 1,000 feet of five-inch large diameter hose (LDH).

Chief Wendt says the department specified a Will-Burt light tower “that really lights up the expressway when we are out there,” along with a Smart Power 20-kW hydraulic generator, Kussmaul 1200 battery conditioner, Whelen 9000 series Super LED lights, and a Mito Corp. heavy duty three camera system.

Messmer notes that the rescue body’s compartments are all 28 inches deep and full height. “We use a rectangular water tank instead of a T-shaped tank to get the full depth and height,” he says. “Also we put a Zico ladder on the rear to gain access to the top of the vehicle where there’s an electrically-activated R-O-M hose bed cover. When you activate the hosebed cover, it deploys an air-driven handrail across the back rear of the hosebed.”

The vehicle’s front bumper includes a 100-foot 1¾-inch hoseline, two 100-foot hydraulic hose reels and two hydraulic extrication tools. A Federal FQ2 siren is placed in the middle of the front face of the extended bumper. 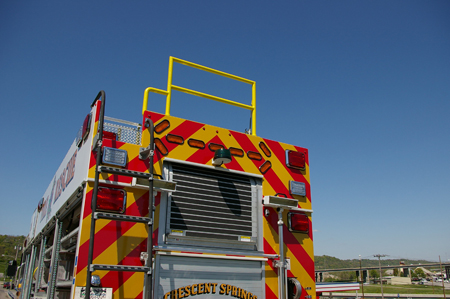 Wendt says the department had Summit build two compartments above the pump panel where Stokes baskets and backboards are stored. “Firefighters can get to them either from the top of the truck or from the lift-up lids on the sides of the vehicle,” he notes.

Crescent Springs, because it spends so much time working calls on highways, designed an arrow board for the top rear of its rescue-pumper, Wendt points out. “We use the arrow board on the expressway to direct traffic,” he says. “We can direct it either left, right or in both directions if needed. There’s also a large green light in the back of the vehicle so when our engineer is ready for water, he turns on the green light and also uses the radio to communicate when he’s ready for water. It’s a redundant system that provides a visual element to getting supply line water.”