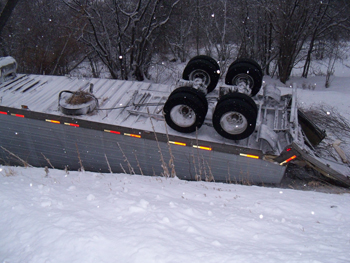 While returning from a call for an overturned big rig last Sunday morning, I was replaying the call in my mind, as so many of us do, to make sure that we did everything in our power to ensure the best of outcomes for all involved. The call: Sunday morning, 0900; blizzard conditions with heavy blowing snow; temperature in the mid teens. The tones dropped for a “big rig rollover, Highway 93, mile marker 341 with vehicle reported to be over the side, upside down, and off the river side of the highway. Unknown injuries, unknown cargo.”

In many rural parts of the country, the first decision that many of us volunteers have to face is exactly which hat or hats do to put on for the response. Our numbers are limited, so most have cross trained for multiple disciplines. Do we call in and respond as fire department, or as ambulance? Do we respond as a rescue task force, or as quick-response EMS?

Upon arrival we found a loaded big rig upside down just as dispatch described. What dispatch didn’t tell us is that before the big rig came to rest, it snapped a power pole. The upper part of the fractured pole was leaning against the cab of the truck and was being held up only by the live wires that now dangled over the leaking inverted fuel tanks. We couldn’t see the placards because they were buried in the deep snow. The trailer was fractured just aft of the kingpin, effectively breaking its back and partially exposing the load. 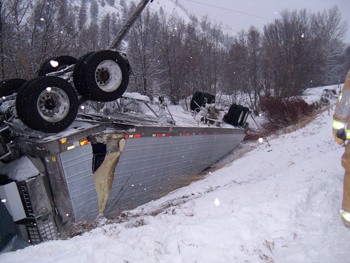 Regardless which set of gear we grabbed or which hat we chose to wear, we were prepared to respond out into the harsh winter environment for the call at hand. Or were we? As I reviewed the aforementioned call in my mind, and later with my crew, I realized that we have more to think about regarding our preparedness. Some of the considerations that needed to be addressed regarding this, and future calls: 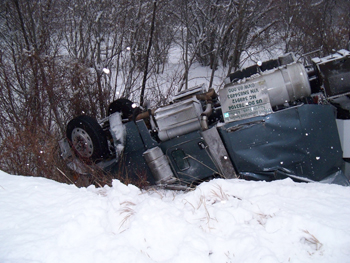 I offer this experience to you with the hope that you can use a bit of our challenge(s) to make you “rurally think” about your own potential challenges. Perhaps you’ve considered all of these things, but perhaps not. City departments don’t typically have these types of challenges. Having originally come from a city department (10 years later), I am still constantly amazed, humbled, and impressed by and with rural departments’ grit and resilience.

In the end, this driver self-extricated with only non-life-threatening injuries. His cargo was cases of Washington apples, and we didn’t need hazmat. The call came in at 0900 hours. The big rig recovery crew arrived on scene at approximately 1700 hours, and the recovery took until 2000 hours. Eleven hours is a long time to be left out in the cold. Are you prepared?

CARL J. HADDON is a member of the Fire Apparatus & Emergency Equipment editorial advisory board and the director of Five Star Fire Training LLC, which is sponsored, in part, by Volvo North America. He serves as assistant chief and fire commissioner for the North Fork (ID) Fire Department and is a career veteran of more than 25 years in the fire and EMS services in southern California. He is a certified Level 2 fire instructor and an ISFSI member and teaches Five Star Auto Extrication and NFPA 610 classes across the country.