We plan, we have interagency meetings, and we train to be as prepared as possible for emergency occurrences in our rural communities. Natural disasters, fire, rescue, EMS, and hazmat, are the typical types of things that we prepare for and train to deal with, right? 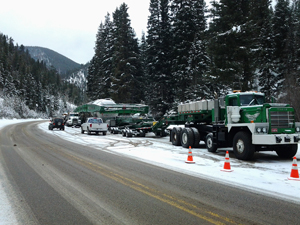 As many of you know, I live and serve in the rural Rocky Mountains of central eastern Idaho. Last week, we were informed that “sometime time within the next day or two, we will be having a Mega-Load come through the county, and we need you guys to be on notice.” 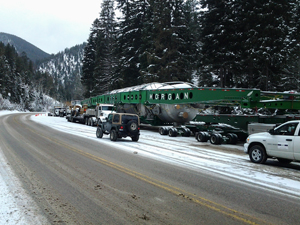 “Be on notice for a Mega-Load” brought more than a few questions to mind. For example, what in the world is a Mega-Load? So, it’s good that we were put on 24- to 48-hour notice, but now what? 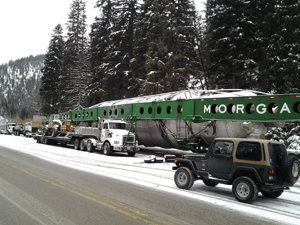 It turns out that this Mega-Load is an extremely large, wheeled transport that is so big it can only travel country intrastate highways (not to be confused with interstate highways), and can only do so late at night because it is almost 20 feet wide.

Honestly, I thought to myself, “How big can this thing really be, and so what?” The results of my research floored me.

This particular load, and there are more to follow, is part of a piece of machinery destined for the tar sand oil fields of Canada, just north of the northern border of Idaho. When reassembled, it is designed to separate “Bakkus” oil (which we’ve recently learned is much more volatile than regular crude oil) from the rock and in which sand it is found. 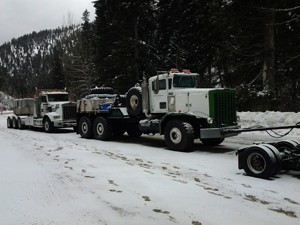 This load is 376 feet long, 900,000 pounds (450 tons), 20 feet tall, and a little over 20 feet wide. The transport has one huge truck that tows the load and two monster sized big rigs (tow barred together nose to tail) that act as push vehicles. 100 tires make up the convoy, with remote-controlled articulating “dollies” (vaguely similar to tiller trucks). The maximum speed the transport can travel is 30mph.

It is mid January as I write this article. Did I mention this thing was traveling through our ice- and snow-covered Rocky Mountain passes? What could go wrong?

In addition to the obvious things that come mind, we had 24 to 48 hours to figure out how this thing could or would affect our infrastructure. Our bridges, for example have a maximum load rating of 450 tons; the same weight as the Mega-Load. We were assured that this wouldn’t be an issue because the bridges would “never have to bear the entire weight of the load all at one time, because of its massive length and weight distribution.” I know that people much smarter than me figure these things out, but it didn’t make me feel much better. If this thing were to have collapsed a bridge or otherwise become disabled on the single north/south route through the county and into Montana, it would have instantly cut off lots of (mostly elderly) folks from vital goods and services. Their next closest help, supply, and medical would be some 75 miles north, over a steep mountain pass. 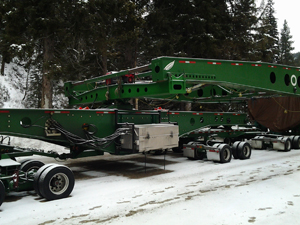 Who would have thought of the need to prepare for something like a Mega-Load? Truth be told, if this thing would have had something go wrong and cut off access, other than try to make sure we have apparatus and personnel on either side of this thing, what could we as a rural department possibly do if something did go wrong with a 125 yard, 900,000 pound, 20 foot wide, behemoth big rig? I like to remind my fellow firefighters that being forewarned is forearmed. Do you live in a rural part of the country that could see something like this come through your fire district or response area someday? Will you be ready?

CARL J. HADDON is a member of the Fire Apparatus & Emergency Equipment editorial advisory board and the director of Five Star Fire Training LLC, which is sponsored, in part, by Volvo North America. He serves as assistant chief and fire commissioner for the North Fork (ID) Fire Department and is a career veteran of more than 25 years in the fire and EMS services in southern California. He is a certified Level 2 fire instructor and an ISFSI member and teaches Five Star Auto Extrication and NFPA 610 classes across the country.