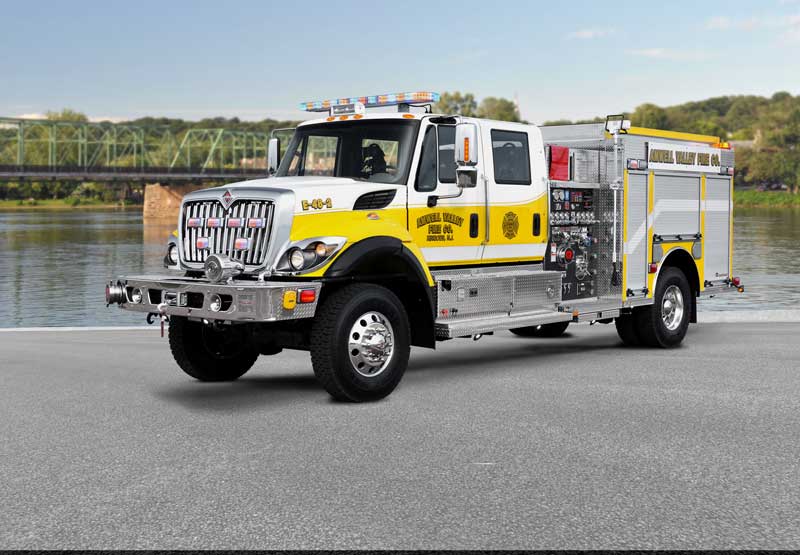 The fire district protected by the Amwell Valley (NJ) Fire Company is a mainly rural area of 28 square miles with two major highways running through it but with no fire hydrants to provide a source of water. When the fire company needed to replace an older pumper, it turned to Rosenbauer to build a 4×4 pumper that could easily negotiate unpaved roads and narrow driveways in hilly terrain.

Tom Ward, an Amwell Valley firefighter and chairman of its Board of Fire Commissioners, says the area is mostly a farming community with a lot of hills crossed by country roads. “A lot of the township doesn’t have paved roads, so we wanted a four-wheel-drive pumper that is maneuverable and able to handle hilly, narrow driveways—some a half mile long—that are almost inaccessible in winter to other apparatus,” Ward says. “We wanted the vehicle to be a pumper that could be used on structures, have a good drafting capability, and also carry a CAFS.”

Joseph Sullivan, Rosenbauer’s eastern regional sales manager, says Rosenbauer built the pumper for Amwell Valley on a 2019 International 7300 4×4 chassis and four-door cab, powered by a Cummins 360-hp ISB engine, and an Allison 3000 EVS automatic transmission. “The International chassis is a little narrower than a custom chassis,” Sullivan points out, “which helps them out on the narrow roads and driveways, but we still were able to put a Hale DSD 1,500-gpm pump on it along with a 750-gallon polypropylene water tank, a 20-gallon foam tank, a FoamPro 2002 single-agent foam system, and a Pneumax 200P CAFS.”

Jim Lepore, president of Defender Emergency Products Sales & Service, who sold the pumper to Amwell Valley, points out that the dimensions of the pumper allow it to have a good turning radius and to be quite maneuverable. “The pumper has a 221-inch wheelbase, is 9 feet 10 inches in overall height, and 29 feet 3 inches in overall length,” Lepore says. “The cab has seating for five in H.O. Bostrom seats, with the three firefighter SCBA seats across the back wall of the cab. On a console between the driver and officer is a platform that has secured storage for a thermal imaging camera, three portable radios, four hand lights, and the mobile radio.”

Sullivan adds that the Rosenbauer pumper has two 1¾-inch hose crosslays of 200 feet each, 200 feet of 2½-inch hose preconnected at the right rear of the vehicle, a booster reel of 150 feet of 1-inch red line hose under the crew door on the officer’s side, and 1,000 feet of 5-inch LDH in the hosebed. “We put slide-out trays, shelves, and tool boards in the compartments to maximize the space on the pumper for their equipment,” he says. “The pumper carries its ladders in an enclosed compartment on the right rear that holds a 26-foot three-section extension ladder, a 12-foot roof ladder, and a 10-foot folding attic ladder.”

He adds that the rear of the vehicle has a Rosenbauer EZ-Climb swivel ladder that swivels 90 degrees to allow access to a compartment holding hard suction and other equipment. The pumper carries Whelen LED warning lights, a Whelen Pioneer LED brow light, and two Whelen telescopic Pioneer scene lights on the front of the body, as well as a 12,000-pound Ramsey electric winch on the front bumper.

Ward points out that, “What’s important to us is drafting water out of swimming pools, creeks, farm ponds, or anywhere that can serve as a water source. The four-wheel drive on this pumper allows us to get to those sources more easily.”