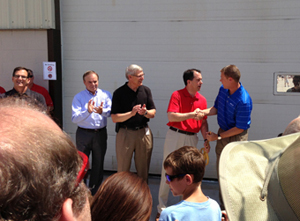 PPLETON, WI—On July 13, 2013, people from the community of Appleton, Wisconsin, as well as other areas around the country gathered for the first ever open house in Pierce Manufacturing’s 100-year history. According to Jim Johnson, president of Pierce Manufacturing, stated that the company was embracing the community that has embraced Pierce for 100 years. “This is the first time that we have opened our doors to the community, to the public, and to the world at large, said Johnson. “We have people from over 30 states, one American territory and two foreign countries registered to participate in this open house today.”

The day kicked off with a parade of fire trucks processing by the company’s headquarters, attended by hundreds. “A special thank you to our customers who participated in that great fire truck parade,” Johnson said before a crowd gathered to officially open Pierce’s doors.

During his remarks, Johnson thanked Pierce’s employees, the Pierce family, current and former leaders of the company, and leaders of its parent company, Oshkosh Corporation. Central  to former and current leaders is Pierce’s dedication to being a people-driven business. “Believe it or not, the history of Pierce, the success of Pierce, and the legacy of Pierce is not about trucks. It’s about people,” said Johnson. “This is a people-first culture. So, I would like to thank and recognize all our employees, teammates as we call them, and their families for their contributions and their never-ending support. 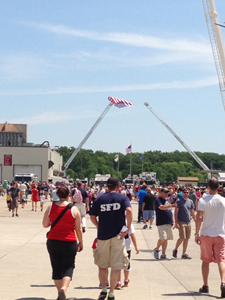 “This people-first culture that we’re talking about starts with our founding family, the Pierce family. They knew and they recognized that the success of any business wasn’t necessarily in the product but the people who made that product. And we are honored today to have Dudley Pierce, grandson of founder Dudley Pierce and several members of the Pierce family,” Johnson said.

Johnson then spoke about “Mr. Pierce,” Doug Ogilvie. ”In the late 1940s, a young man named Doug Ogilvie was a caddy, and while he was caddying, he met a man named Eugene Pierce, Dudley’s father. One thing let do another and Eugene offered Doug Ogilvie a job,” Johnson related. “Doug desperately wanted a job—in fact he was willing to take two jobs, as legend has it, but only get paid for one. Doug was a hard worker who believed in that people-first culture. He worked hard. He ultimately became president of Pierce manufacturing and then eventually bought Pierce Manfuacturing from the Pierce family. He was a true servant and leader who always put others first. Sadly, Doug passed away this March and today we are dedicating, in Doug’s honor and in Doug’s name, the main assembly aisle in our assembly plant, Ogilvie Boulevard.”

Johnson went on to describe Pierce’s ownership changing from Ogilvie to Oshkosh Corporation as a blessing. “What a blessing that turned out to be,” said Johnson. “Because Oshkosh continued to drive that culture of people first. That’s why I’m honored today to share the stage with three members of the Oshkosh family who have helped lead and shepherd that message at Pierce an d throughout our parent corporation to set us up for another 100 successful years in business.” 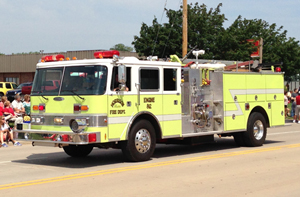 Wisconsin’s Governor, the honorable Scott Walker, followed Johnson and noted how important Pierce has been to not only Wisconsin, but globally as well. “With a couple thousand strong in terms of employees, as Governor I appreciate your presence in Appleton. I appreciate it as part of the larger group with Oskhosk Corporation. I appreciate it not only in jobs created, but also the economic impact here and around the globe. Considering all the things made in China, now we send things made in America over there,” said Walker.

Walker concluded his remarks by saying, “Remember—you make more than just an engine. You make more than just fire suppression equipment. You make something that saves people’s lives each and every day, here and around the country and around the world. So, on behalf of all of us in the State of Wisconsin, we are proud of you, and we are proud of this 100-year tradition.”

After their remarks, Johnson, Walker, Oshkosh leadership, and past Pierce leaders joined to cut the red ribbon, officially opening Pierce’s doors to the public. 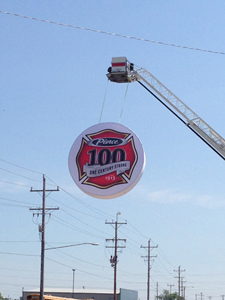 Pierce trucks were on display as well as a Pierce history display, and visitors could take self-guided tours of the facility to see the build process of a fire truck and talk to experts in each area. Both young and old could also take a ride on one of two antique fire trucks.

For the kids, there was a coloring contest, bean bag toss, fire extinguisher demonstrations, a fire safety house, face painting and tattoos, power wheels and pedal car course, and an opportunity to hear the story of “Pierce the Pumper.”

To view a photo gallery of the day’s events, visit the Pierce 100th Anniversary Parade and Open House Gallery.

Rurally Speaking: Is Your Department “Shining” Or “Whining”?