Stacy-Lent Fire Department, in Stacy, Minnesota, recently had a fire apparatus nearing the end of its National Fire Protection Association (NFPA) recommended 20-year first-line service life and had to consider its options for a new piece of apparatus.

The department covers 36 square miles, including the city of Stacy, the township of Lent and eight sections of wildlife management areas. Interstate 35 runs through the district. Population is approximately 3,200 and the types of structures to be protected include rural and residential homes, some commercial and light industry, a large concrete plant, and a bird feed factory.

“We wanted a vehicle that would allow us to get as much water on it as possible and still be able to get everything else on it that we needed, and still make its gross weight,” says Troy Colberg, a Stacy-Lent firefighter and chair of the department’s truck committee. “We also knew we wanted a Waterous pump, all manual Waterous valves, an enclosed pump panel, and a Command Light tower.”

The Stacy-Lent truck committee performed its due diligence, visiting a half dozen neighboring fire departments with pumpers similar to what they were considering, as well as investigating a number of apparatus manufacturers. “We examined all their vehicles, weighed what we wanted and the options available, and decided that Custom Fire fit us best,” Colberg says.

Jim Kirvida, president of Custom Fire, says the Stacy-Lent truck committee “fell in love with the commercial chassis concept with the full response cab. You either love the cab or hate it, and while some people think it’s big and cumbersome, those who love it know that it has lots of headroom, is very quiet, and very roomy.” 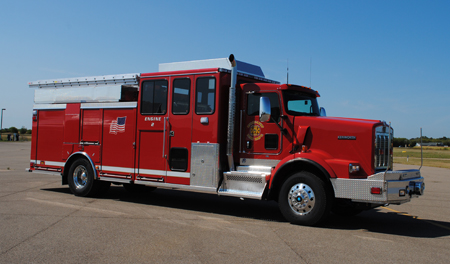 Stacy-Lent chose for the full response cab have three rear-facing seats and one forward-facing seat in the crew cab area, just forward of the covered pump operator’s panel. “The full response cab encloses the crew and also encompasses the entire the entire pump module, including the preconnected lines that are on slide-out trays,” Kirvida observes.

The finished pumper is on a Kenworth T800 chassis powered by a 450-horsepower Cummins ISX 12 diesel engine and Allison 4500 EVS automatic transmission. The pump is a Waterous CMUC20 1,500-gallon per minute (gpm) model with a FoamPro 2001 foam system and Fire Research Pump Boss pressure governor. The pumper carries a 1,250-gallon water tank and a 30-gallon foam cell.

Jessie Corey, sales representative for Custom Fire, says another concern the Stacy-Lent committee voiced was about corrosion issues. “That was one of their bigger concerns,” Corey says, “so we went with an all stainless steel construction in the vehicle.”

Colberg says the committee also required an extended front bumper that holds a hydraulic reel for a Holmatro tool, an airline reel and plumbing for 200 feet of 1¾-inch hoseline. “We operate out on the interstate a lot,” Colbert points out, “so we wanted the pumper to be prepared for anything we might encounter out there.”